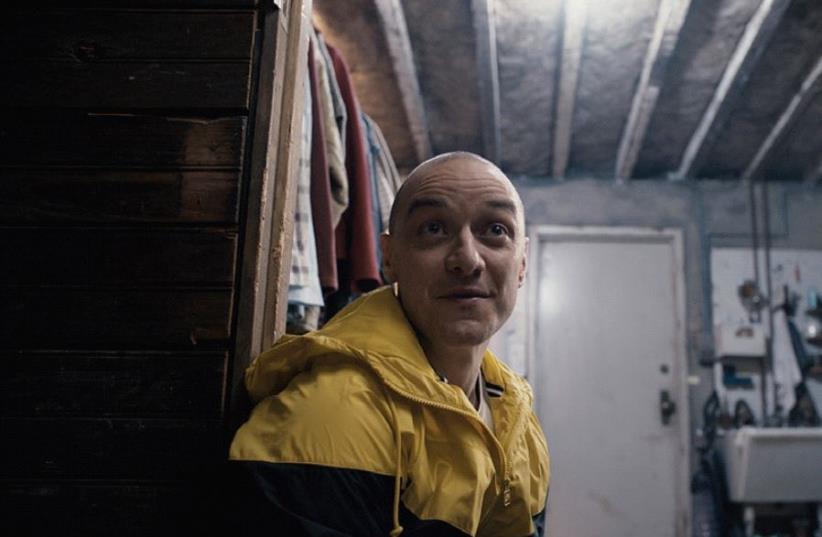 Split film
(photo credit: PR)
Advertisement
1. A PLETHORA OF PERSONALITIESWith the film Split, writer-director M. Night Shyamalan returns to thrilling form as he tells the tale of Kevin, a man with 23 different personalities.Compelled by unclear motivations, Kevin abducts three girls after a birthday party and keeps them in what appears to be a bunker of sorts. As the girls attempt to make sense of what is going on and why they are being kept alive, it becomes evident that a war is being waged among several of Kevin’s identities. With James McAvoy.2. SPACE RACEThe film Hidden Figures tells the incredible story of Katherine G. Johnson, Dorothy Vaughan and Mary Jackson – brilliant African-American women working at NASA who served as the brains behind one of the greatest operations in history: the launch of astronaut John Glenn into orbit. With Taraji P.Henson, Octavia Spencer, Janelle Monae.3. THE ODD COUPLE The Comedy Central sitcom Idiotsitter follows Billie (Charlotte Newhouse), a self-described academic who takes a gig babysitting an adult woman, Gene (Jillian Bell), in exchange for a handsome fee from Gene’s wealthy parents.Sunday to Thursday at 10:30 p.m. on HOT Comedy Central and HOT VOD.4. SHAPING TIMEThe Tel Aviv Museum of Art presents the exhibition “Geography of Time” by contemporary artist Fiona Tan (b. 1966). The video installations on show reflect Tan’s interest in the presence of the passing time, intricacies of biography, power of portraiture and the complexity of identity. The artist draws from her personal experience. Born in Indonesia to parents of Australian and Chinese origin, Tan was raised in Australia and currently lives and works in Amsterdam.Opens February 17 at the Tel Aviv Museum of Art 5. MAD ABOUT MAYA Popular Israeli singer-songwriter Maya Isacowitz will perform a concert at the Elma Arts Complex Hotel in Zichron Ya’acov. The performance includes songs in English from her latest album All of the Miles, along with hits such as “Is It Alright,” “Brave Again” and “Free Yourself.” In 2011, Isacowitz released her debut album, Safe and Sound, at age 21. The album went gold and brought Isacowitz the title of Newcomer of the Year from the ACUM organization.Thursday, 9 p.m. For tickets: www.elmahotel.com 6. ART FOR A CAUSEThe annual fund-raising event benefiting the Israel AIDS Task Force (IATF ) will be held next Saturday night.More than 600 artists will display some 800 pieces of art in an exhibition at Bank Hapoalim’s main office in Tel Aviv. The exhibition is held in memory of Leah Rabin, the first public figure in Israel to support the campaign against AIDS. Among the artists are Yigal Tumarkin, Natan Elkanovich, Ofer Lalush and Yair Garbuz.February 11 from 7:30 p.m. to 11 p.m., 63 Yehuda Halevi Street, Tel Aviv 7. TICKLING THE IVORIESPianist, conductor and musical director Gil Shohat presents 7 Pianos, an evening featuring grand pianos, one stage and seven virtuoso performers. This original production of classical and popular music, arranged for 70 fingers, features the talents of Rami Kleinstein, Shlomo Gronich, Leonid Ptashka, Omri Mor, Michael Zartsekel, Victor Stanislavsky and Tal Samnon. IPO soprano Daniella Lugasi will also take part.Saturday, 8:30 p.m., Charles Bronfman Auditorium (Heichal Hatarbut), Tel Aviv 8. ‘ONE’ OF A KIND The Vertigo Dance Company is celebrating its 25th anniversary with a new dance piece One. One & One. The work, a creation of Noa Wertheim, the choreographer and art manager of the company, tells a story of the individual and society. The show deals with the individual’s heart’s desires, the personal will versus social unity, listening to the inner voice and the echo reflecting from different directions. It is an exploration of the human realm and spiritually.February 15 at 9 p.m., Suzanne Dellal Center, Tel Aviv 9. HAVING A BALL French choreographer Thierry Malandain’s idiosyncratic staging of Cinderella comes to Israel, complete with dreamlike dancing and sparkling Prokofiev score. The 20-strong ensemble, comprised of alums of the renowned Malandain Ballet Biarritz, gives a subtle rendering of the fairy tale favorite, navigating the dramatic tonal changes – from Cinderella’s miserable day-to-day existence to euphoric party scenes – with nuance and considerable inventiveness.February 16 to 18 at the Opera House, Tel Aviv; February 20 at the Motzkin Theater, Haifa 10. FLAMENCO FEVERThe Dan Panorama Hotel in Eilat is hosting an international flamenco festival during the last weekend of February. The program includes performances by Pablo Rosenberg, Silvia Duran and Italo Gonzalez. There will also be a number of flamenco and poetry workshops and seminars, as well as workshops on how to play the guitar.February 23 to 25. For more info: www.danhotels.com