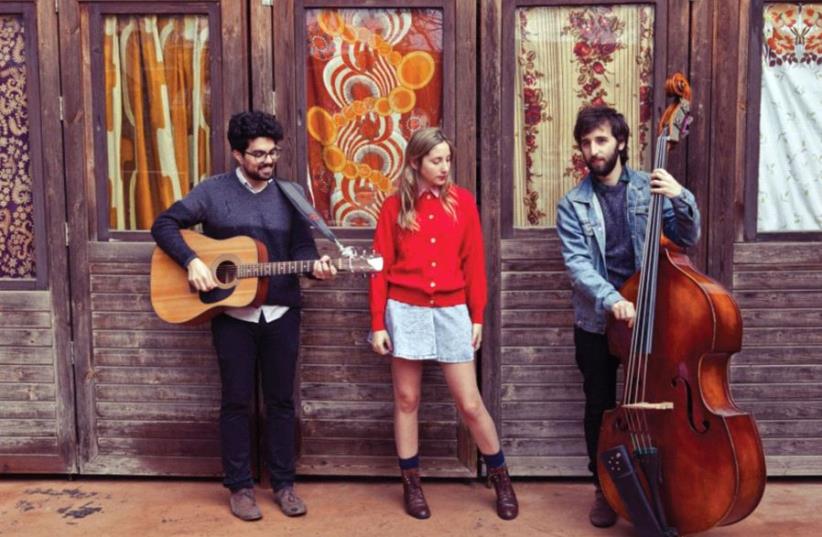 Israeli folk rock band Jane Bordeaux
(photo credit: PR)
Advertisement
1. A SHADY AFFAIR Fifty Shades Darker is the film adaptation of the second installment in the Fifty Shades trilogy by E. L. James. When a wounded Christian Grey tries to entice a cautious Ana Steele back into his life, she demands a new arrangement before she will give him another chance. With Jamie Dornan, Dakota Johnson.2. THE LONG CON Imposters is new black-comedy TV series that follows Maddie (Israeli-American actress Inbar Lavi), a persona-shifting con artist who leaves her unwitting victims tormented when they realize they have been used and robbed of everything. But things get complicated when her former targets, Ezra, Richard and Jules, team up to track her down. With Rob Heaps, Parker Young, Uma Thurman.

3. BRINGING DOWN THE HOUSE English alternative rock band The House of Love will perform in Israel this week. Formed in 1986, the band rose to prominence in the UK as a leading indie rock band in 1988. It is best known for its detailed psychedelic guitar sound and the successful singles “Shine On,” “Christine” and “Destroy the Heart.” However, the band broke up in 1993 and its members went on to independent projects. In 2003, the band’s main songwriters, soloist Guy Chadwick and leading guitarist Terry Bickers, decided to reconstitute the group, which has been working ever since.Wednesday, 10 p.m., Zappa Herzliya. For tickets: www.zappa-club.co.il

4. A JAUNT WITH JANE Popular Israeli folk rock band Jane Bordeaux is embracing the Valentine’s Day spirit with a performance at Jerusalem’s Yellow Submarine. The group was formed five years ago when vocalist Doron Talmon, guitarist Amir Zeevi and bassist Mati Gilad began performing together around Tel Aviv. They are known for their Hebrew interpretation of American country music. Jane Bordeaux was the most frequently played band of 2015 on Galgalatz, Israel’s most popular radio station.

Tuesday, 9 p.m., Yellow Submarine, Jerusalem. For tickets: yellowsubmarine.org.il 5. SHAKING IT UP Gyrating its way into Eilat for the 12th year running, the International Belly Dancing Festival will showcase four days of festivities centered on the traditional Middle Eastern dance form. The festival, which is the world’s largest belly dancing event, features some 950 dancers from Israel and 30 other countries. This year’s festival includes more than 50 workshops run by wellknown belly dancers, performances, open stages, competitions and night parties.Wednesday through next Saturday. Info: www.eilatfestival.net6. A RIDE ON THE WILD SIDE The Samarathon is a three-day extreme mountain bike race taking place in the Negev. Consisting of teams of two riders, the Samarathon takes place in three stages and covers a large portion of the Negev Desert, from Sde Boker to the Eilat mountains. Riders will experience authentic nakebs (camel trails) formed by ancient caravans, gravel and 4x4 tracks. Those taking part in the challenge will get to relax in the riders’ village in Timna Park.Thursday through next Saturday. Info: www.samarathon.co.il 7. SEARCHING FOR CLUES The Jerusalem-based Incubator Theater company presents The City, a detective story rap musical by The Victor Jackson Show Ensemble. Inspired by film noir and detective films, the plot of this live theatrical event focuses on the character of Joe, a cynical and bitter detective working in a corrupt, decaying city. In English.Tuesday, 8:30 p.m., The Incubator Theater, Beit Mazia, Jerusalem. For tickets: www.eventim.co.il

8. A BOW TO BOWIE Widely regarded as the world’s best David Bowie tribute artist, David Brighton and his band Space Oddity are bringing Bowiemania to Tel Aviv. Brighton, who shares Bowie’s sharp nose, high cheekbones and a voice that producers once told him sounded “too much like Bowie,” brings everything from Ziggy Stardust and the Thin White Duke to Bowie’s “Let’s Dance” era of the 1980s to life. Fans can look forward to hearing such hits as “Space Oddity,” “Under Pressure,” “Life on Mars,” “Fame,” “Young Americans,” “China Girl” and “Rebel Rebel.”Thursday, Hangar 11, Tel Aviv Port. For tickets: www.eventim.co.il/bowie

9. FOREVER FRIENDS The Mediatheque Theater in Holon presents its production of the children’s musical A Kiss in the Pocket, based on the songs by Shlomit Cohen Assif. The play tells the story of four children, best friends since kindergarten, who find out that their good friend Ruth is about to move to America. The four decide to do anything in order to stay together and not be separated. Directed and adapted by Yaara Reshef Nahor – 2016 Haifa International Children’s Theater Festival winner.February 25 at 10:30 a.m., Mediatheque Theater, Holon. For tickets:www.mediatheque.org.il

10. CLOWNING AROUND Recirquel, the first Hungarian contemporary circus company, will perform its last two shows of The Naked Clown in Tel Aviv this weekend. The Naked Clown invites viewers to a masked ball, where the scenes center around the same question: How many layers and masks must be removed before one’s true nature is revealed? Friday at 1 p.m. and Saturday at 4 p.m., Tel Aviv Performing Arts Center. For tickets: www.israelopera.co.il