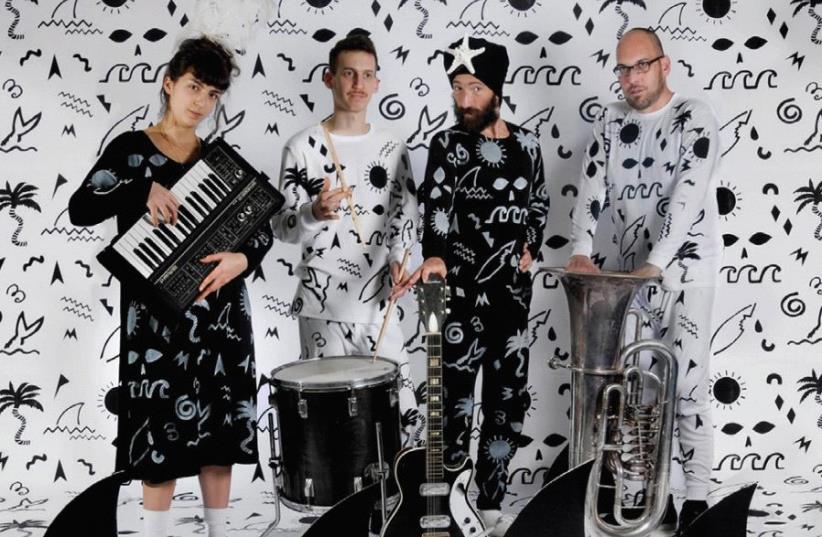 Israeli surf rock trio Boom Pam
(photo credit: PR)
Advertisement
1. KILLER INSTINCTIn the film John Wick: Chapter 2, Keanu Reeves returns as hit man John Wick, who is forced back out of retirement by a former associate plotting to seize control of an international assassins’ guild. Bound by a blood oath to help him, Wick goes to Rome, where he squares off against some of the world’s most ruthless killers. With Laurence Fishburne, John Leguizamo, Ian McShane.2. GIRL POWERSet in Santa Barbara in the late 1970s, the film 20th Century Women follows a freethinking mother who enlists the help of two young women as she tries to raise her adolescent son during a period of cultural and social turmoil. With Annette Bening, Elle Fanning, Greta Gerwig.3. LAUGHING MATTERSThe new HBO TV comedy series Crashing stars Pete Holmes as a stand-up comic who discovers that his wife is unfaithful, leading him to reevaluate his life amid the New York City comedy scene. With Artie Lange, Lauren Lapkus, T.J. Miller. Executive produced by Judd Apatow.Mondays at 10:30 p.m. on HOT HBO and HOT VOD.4. GET THE PARTY STARTEDCombining Balkan, Jewish and Mediterranean beats – with an emphasis on Greek music, mustaches and lounge jackets – Israeli surf rock trio Boom Pam will perform their many hits together with hip hop rapper Nechi Nech at Tel Aviv’s Bascula. The band’s act is a self-described “alcoholsoaked wedding party.”Saturday, 8:30 p.m., 72 Harakevet St., Tel Aviv. For tickets: www.eventer.co.il/boompam_nechi5. SOAK UP THE ‘SUMMERTIME’The New York Harlem Theater Company is bringing its internationally acclaimed production of George Gershwin’s acclaimed American opera Porgy and Bess to Israel. The opera tells the story of the residents of Catfish Row in Charleston, South Carolina, a tenement inhabited by poor black families, and the love story between the crippled beggar Porgy and the drug addict Bess. It includes such classic songs as “Summertime,” “I Got Plenty o’ Nuttin’,” “It Ain’t Necessarily So” and “My Man’s Gone Now.”March 1 at the Convention Center in Haifa; March 3 to 8 at the Charles Bronfman Auditorium in Tel Aviv. For tickets: www.2207.co.il 6. THE REEL DEAL The second annual Austrian Film Week takes place at the cinematheques in Jerusalem, Tel Aviv, Haifa, Holon, Herzliya and Sderot. Opening the festival is the drama Love Maybe (pictured) by director Michael Kreihsl. In addition to the four feature films on offer, two documentaries will be screened. One is A German Life, about Brunhilde Pomsel, the former secretary, stenographer and typist of Nazi propaganda minister Joseph Goebbels. All screenings have English and Hebrew subtitles.From tomorrow to February 28. For tickets: www.bmeia.gv.at/ en/austrian-cultural-forum-tel-aviv7. WINE NOT?Jerusalem’s First Station is hosting a wonderful wine experience. Taste, smell and drink in the essence of Israel’s boutique wineries. The following wineries are taking part: Yaffo Winery, Ramat Negev Winery, Metzuda Winery, Jerusalem Winery, Morly Winery, Kishur Winery, Tanya Winery and Netofa Winery. Participation in the event costs NIS 60, which includes six tastings, a wine workshop and a souvenir wine glass.Wednesday and Thursday, 5 p.m. to 11 p.m.8. IN THIS TOGETHER Mayumana, Israel’s internationally acclaimed rhythm-dance-performance art troupe, is teaming up for the first time with Irish dance group Spirit of the Dance for a number of shows throughout the country. Spirit of the Dance includes 30 dancers who combine Irish dance with the passionate Latino rhythms of tango, flamenco and salsa.Today through March 4 around the country. For info and tickets: www.2207.co.il 9. ON YOUR MARKS At the 21st annual Samsung Tel Aviv Marathon, more than 40,000 runners from Israel and abroad will descend on the city to compete in the 42-km. race or take part in various other courses. The multi-course race starts in Hayarkon Park and follows a scenic route through the city and along the seashore before finishing back in the park. In addition to the full marathon, participants can choose a half marathon, a 10-km. or a 5-km. course. There will also be a mini-marathon for children and a 42-km. handcycle race for people with disabilities.February 24, Hayarkon Park, Tel Aviv. Registration and info: www.tlvmarathon.co.il 10. BETTER THE DEVIL YOU KNOW The Israeli Opera presents a new production of Gounod’s grand French opera Faust. Loosely based on Goethe’s two-part tragic play Faust, the opera tells the story of elderly Dr. Faust, who is tormented by the feeling that he has wasted his life. This leads him to make a pact with the Devil, exchanging his soul for unlimited knowledge and worldly pleasures. Directed by Stefano Poda and conducted by Dan Ettinger.March 6 through 25 at the Opera House in Tel Aviv. For tickets: www.israel-opera.co.il