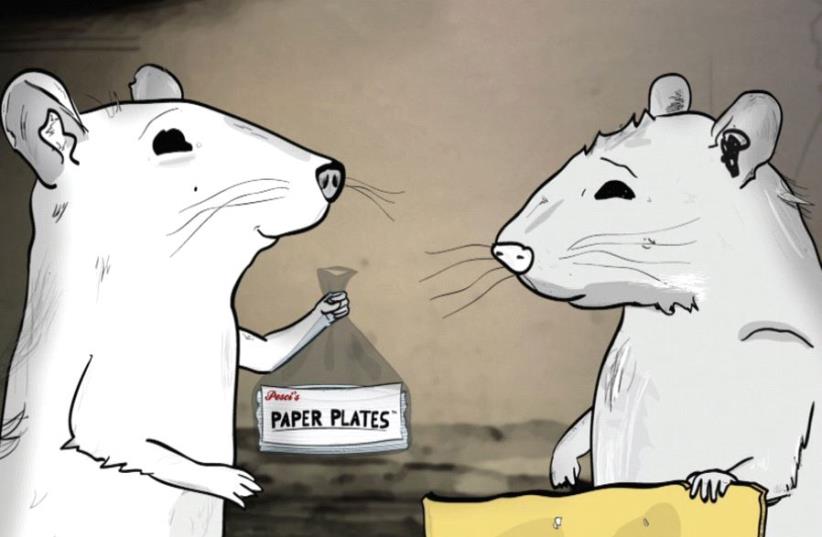 HBO's Animals
(photo credit: PR)
Advertisement
1. THE CLAWS ARE OUT With the film Logan, 17 years after X-Men made him a movie star, Hugh Jackman ends his run as Wolverine – at least for now. In the near future, a weary Logan cares for an ailing Professor X (Patrick Stewart) in a hide-out on the Mexican border. But Logan’s attempts to hide from the world and his legacy are up-ended when a young mutant arrives, pursued by dark forces.2. THE POWER OF LOVEFrom writer/director Jeff Nichols, the film Loving celebrates the real-life courage and commitment of an interracial couple, Richard and Mildred Loving, who married in 1958 and then spent the next nine years fighting for the right to live as a family in their hometown in Virginia. With Joel Edgerton, Ruth Negga.3. CITY CRITTERSHBO presents Animals, a new half-hour adult animated TV series, created by writers/directors Phil Matarese and Mike Luciano. Based on a series of online shorts, the comedy imagines some of New York City’s most prevalent non-human urbanites – pigeons and bugs, rats and squirrels, police horses and alley cats – as neurotic hipsters. Featuring the voices of Molly Shannon, Nick Kroll, Wanda Sykes, Marc Maron.Every night on HOT HBO and all episodes on HOT VOD.4. DISHING OUT DJANGOThe Israeli Gypsy jazz ensemble Swing de Gitanes has been active for the last 10 years with more than 250 successful performances. With fresh virtuosity, they revive and renew Gypsy swing, which was established by legendary guitarist Django Reinhardt. They will perform as part of the Jazz Festival in the Judean Hills with vocalist Dasha Yefremenko.Tomorrow (Saturday), 12:30 p.m., Beit Jamal Concert Hall. For tickets: 052-263-4444.5. THE BEAR NECESSITIESThe exhibition “Simple Pleasures” features illustrations of A.A. Milne’s honey-loving bear Winnie the Pooh as he strolls down Tel Aviv’s Rothschild Boulevard, explores Jerusalem’s Mahaneh Yehuda market with Piglet, picks oranges on a kibbutz orchard and revels in the abundance of his favorite food staple during Rosh Hashana. The illustrations, drawn by British artist Kim Raymond, are on display at the Beit Ariela Library. Story hours and creative writing workshops are offered every week.Ongoing at Beit Ariela, 25 Shaul Hamelech Blvd., Tel Aviv 6. THE CAT’S MEOWJust in time for Purim, the Mediatheque Theater in Holon presents Dr. Seuss’s children’s book The Cat in the Hat. Rhyming his way through the house while balancing cups and tools, Cat turns a cozy home into chaos, where Sally, her brother and their outspokenly cautious pet Fish are amused, astounded and anxious. Hebrew translation by Leah Naor.March 11 at 10:30 a.m. and 12:30 p.m. Tickets and info: www.mediatheque.org.il 7. SIGHTS AND SOUNDSThe Tel Aviv Museum of Art presents “Compositions for Timespace,” a series of three exhibitions presenting cooperation between visual artists and musicians who examine their connection through audio-visual dialogue.In the first chapter, Maqamat, artist Dor Zlekha Levy and musician Aviad Zinemanas stage a video installation focusing on internal and external exile, portraying the unique tale of Iraqi music and Iraqi-born Jewish musicians who immigrated to Israel.Opens Tuesday at the Tel Aviv Museum of Art.8. A SENSE OF SELF Following the huge success of Not by Bread Alone, Jaffa’s Nalaga’at Theater presents its latest production, Edgar. Written and directed by Ofer Amram, this play also deals with issues of deafness and blindness, but this time the story follows a man as he gradually loses his eyesight and hearing. While the world around him begins to fade, Edgar embarks on a spiritual journey to help him cope with his deepest fears of loneliness and uncover new passions, including a female love interest.Tuesday, 8:30 p.m. in Jaffa. Tickets and info: http:// nalagaat.org.il 9. THE WALKING DEAD Join the undead as they prowl the streets of Tel Aviv on Purim. The annual Tel Aviv Zombie Walk has fast become a Purim institution, with the number of zombied participants rising every year! So get ready to witness some undead knights, demons, brides, clowns, fairytale characters and even some rather rabid IDF soldiers.March 11 at 9:30 p.m. Gathering point: Corner of King George Street and Ben-Zion Blvd., Tel Aviv 10. THE SKINNY ON FATBOY SLIMTrailblazing British DJ Fatboy Slim, aka Norman Cook, will be performing on March 12 at Tel Aviv’s Hangar 11.Cook first rose to fame in the 1980s as the bassist of the indie rock band The Housemartins. He adopted the Fatboy Slim moniker in 1996, producing a number of hit singles such as “The Rockafeller Skank,” “Praise You,” “Right Here, Right Now” and “Weapon of Choice.” He has won 10 MTV Video Music Awards and two Brit Awards.For tickets: www.fatboyslim.co.il