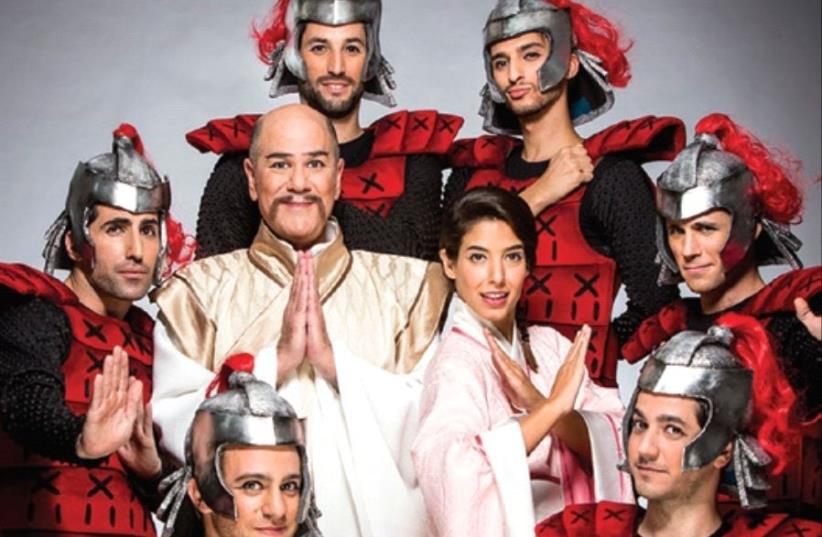 The Orna Porat Theater presents its 14th annual Yaron Festival for Purim
(photo credit: KFIR BOLOTIN)
Advertisement
1. ALL HAIL THE KING The film Kong: Skull Island reimagines the origin of the mythic King Kong in a compelling, original adventure from director Jordan Vogt-Roberts (The Kings of Summer). In the film, a diverse team of explorers is brought together to venture deep into an uncharted island in the Pacific – as beautiful as it is treacherous – unaware that they’re crossing into the domain of the mythic Kong. With Tom Hiddleston, Samuel L. Jackson, Brie Larson, John Goodman, John C. Reilly.2. AWASH IN RED TAPEWinner of the Palme d’Or at the 2016 Cannes Film Festival, as well as the BAFTA award for Best British Film, I, Daniel Blake is the latest film from director Ken Loach. It tells the story of a 59-year-old carpenter recovering from a heart attack who befriends a single mother and her two children as they navigate their way through the Kafkaesque social benefits system. With Dave Johns, Hayley Squires.

3. SPIES LIKE USThe TV drama The Blacklist: Redemption is a spin-off of the popular NBC series The Blacklist. Undercover operative Tom Keen joins forces with Susan “Scottie” Hargrave, the brilliant and cunning chief of Grey Matters, a covert mercenary organization that solves problems governments don’t dare touch. With Famke Janssen, Ryan Eggold.Airs Saturdays at 9 p.m. on HOT Zone.4. FORTIS’S FORTEVeteran Israeli rocker Rami Fortis brings his wild onstage antics to Tel Aviv’s Barby Club on Purim eve.The concert will feature popular songs from every period of the singer’s career, which spans from his debut album in 1978 to 2011. Fortis’s 1978 album Plonter was considered a breakthrough in Israeli music and remains one of the most influential in the history of Hebrew rock. Revelers are encouraged to come in their most outrageous costumes.Sunday, 8:30 p.m. For tickets: www.barby.co.il 5. FOOD FOR THOUGHT ON FILMGreat movies definitely stimulate the mind, but the films in the Jerusalem Cinematheque’s Art and Brain Week, which runs from March 12 to 19, raise questions about the very nature of consciousness. The event, which is a collaboration between the Edmond and Lily Safra for Brain Sciences (ELSC) at the Hebrew University and the Jerusalem Cinematheque, takes place every year as part of the international Brain Awareness Week.Some of the films on offer include Sully; Weiner; and The Lego Batman Movie. A lecture will precede each screening.

For more info and tickets: http://jercin.org.il6. JAPAN IN JERUSALEM Harucon is an annual Israeli anime and manga convention held every Purim at Jerusalem’s International Convention Center. It features a variety of activities and events such as lectures, workshops, panels, booths by vendors and artists, movie screenings and original musicals. Among the top attractions is the cosplay competition, which promises to be very diverse and colorful, as the convention coincides with the Purim.Sunday, 10 a.m. to 9 p.m. For more info: http://2017.harucon.org.il 7. PURIM PLAYS FOR KIDSThe Orna Porat Theater presents its 14th annual Yaron Festival for Purim, a three-day festival of plays for the whole family. This year, 13 plays will be performed, including two premieres: an adaptation of Julia Donaldson’s award-winning children’s book The Gruffalo; and a Chinese musical comedy based on Disney’s Oscar-nominated film Mulan. In Hebrew.Saturday through Monday, Tel Aviv Museum of Art. For tickets: www.porat-theater.co.il

8. UNDER THE BIG TOPThe Florentine circus is celebrating Purim with its show “Alien Circus,” featuring glow-in-the-dark and water acrobatic stunts, fire juggling and more. In addition, there is a performance by a popular Russian circus troupe called “Reflection: The Mirror Show,” which features an array of alien costumes made from pieces of mirror, LED lighting and lasers.Today and tomorrow, as well as next Friday and Saturday, Florentine Circus’ tent in Hakfar Hayarok. For more info: www.florentinecircus.co.il.9. VIVE LES FILMSThe 14th annual French Film Festival at the Jerusalem, Tel Aviv, Haifa, Holon, Herzliya, Ashdod and Sderot cinematheques begins on Thursday and runs through April 5. The festival features an especially distinguished guest list, plus the best of contemporary French cinema. The festival opens with Un sac de billes (A Bag of Marbles), which will be screened in the presence of the film’s director, Christian Duguay.The film, set in occupied France during WW II, follows two young Jewish brothers who are sent by their parents to the free zone.For tickets and more info: www.cinema.co.il 10. ON YOUR MARKS....The International Jerusalem Winner Marathon draws thousands of spectators who come to watch amateur and professional runners from all over the world. The events include a full marathon, a half marathon and a 10K run, all of which pass through Jerusalem’s unique landscape, rich in history, religion and culture. In addition to the longer distance races, there is a 4.2K run that is open to the public and an 800-meter run called “Running for a Cause.”Next Friday. For info: www.jerusalem-marathon.com