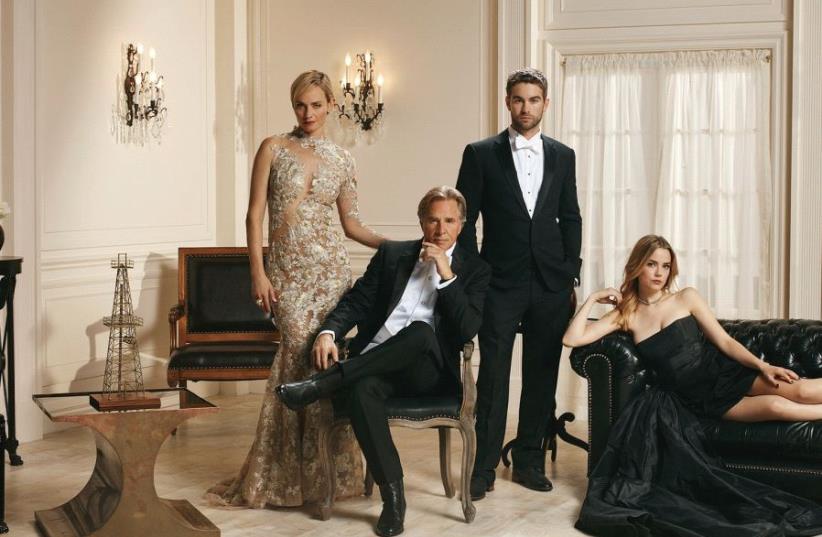 TV soap opera Blood and Oil
(photo credit: PR)
Advertisement
1. A PIRATE’S LIFE
Captain Jack Sparrow once again returns in the fifth installment of the film Pirates of the Caribbean: Dead Men Tell No Tales. Thrust into an all new adventure, a down-onhis- luck Sparrow (Johnny Depp) feels the winds of ill fortune blowing even more strongly when deadly ghost sailors led by his old nemesis, the evil Capt. Salazar (Javier Bardem), escape from the Devil’s Triangle. The film also features the return of Orlando Bloom and Keira Knightley.2. STRIKING IT RICH
In the TV soap opera Blood and Oil, a young married couple try to cash in on the modern-day oil boom in North Dakota and become involved with a sly local oil baron and his troubled family. With Don Johnson, Chace Crawford, Rebecca Rittenhouse.Starts Sunday at 8:45 p.m. on HOT 3 and HOT VOD.3. THE WAY OF AI WEIWEI
On display for the first time in Israel at the Israel Museum are works by Chinese artist Ai Weiwei, one of the most influential and esteemed members of the international contemporary art scene. Weiwei’s artworks combine sculpture, photography, video and large-scale installations. This exhibition, entitled “Maybe, Maybe Not” – spread out over a number of galleries – features powerful and visually captivating works exploring issues facing contemporary culture.Opens today at the Israel Museum, Jerusalem.www.imj.org.il 4. TAKING PRIDE IN FILM
The TLVFest Film Festival, now in its 12th year, is one of the most important cultural LGBT events in Israel. Held at the Tel Aviv Cinematheque, the festival offers public screenings of films with no Israeli distribution, meetings with local and foreign filmmakers, panel discussions and special events.Recent guests have included Alan Cumming (The Good Wife) and Lea DeLaria (Orange Is the New Black).Today through June 10 in Tel Aviv. For more info: http://tlvfest.com5. CAUGHT ON TAPE
Robert Wilson’s highly regarded production of Samuel Beckett’s play Krapp’s Last Tape – which Wilson designed, directed and stars in – is part of this year’s Israel Festival. Krapp’s Last Tape is Beckett’s haunting drama about a man who prepares to record his annual birthday tape, a habit he has maintained for 30 years. He gets mad, gets sad, and finally resigns himself to his fate. In English with Hebrew surtitles.Monday and Tuesday, 8:30 p.m., Jerusalem Theatre. For tickets: http://israel-festival.org 6. BOOKWARD BOUND
Hebrew Book Week opens around the country on Wednesday, offering the public a chance to buy books at reduced prices. There will also be many musical events and other activities such as kids’ shows, book signings and story telling.Runs through June 17 at locations such as Rabin Square in Tel Aviv; The First Station in Jerusalem; and Beit Sapir Square in Kfar Saba.

7. SPIES LIKE US
Encore! Educational Theatre Company presents a new English musical, Intrepid: The Saga of the NILI Spy Ring. The romantic and intriguing story of the show is set in and around Zichron Ya’acov a century ago, when a group of young determined Zionists succeeded in conveying important military information about the Ottoman Turks to the British command in Egypt. The music was composed by Paul Salter, with the libretto by Robert Binder.Wednesday, 7:30 p.m.; Thursday, 5 p.m. and 8 p.m., Hirsch Theater, Beit Shmuel, Jerusalem. For tickets: www.encore-etc.com 8. SMART BY DESIGN
Design Week, the initiative of the Jerusalem Development Authority, has been held at Beit Hansen for the past five years. Exhibitions, workshops, pop-up shops and performances will be held during the week throughout Jerusalem, such as the Sherover Villa, the Jerusalem Theatre, the Islamic Museum for Art and the First Station. The main theme of this year’s Design Week is Combination.June 8 through 15 in Jerusalem. For more info: http:// hansen.co.il 9. WEST END BOYS
Legendary British electro-pop duo Pet Shop Boys will perform at Hayarkon Park as part of Tel Aviv’s Pride Week.The Super World Tour will see the dynamic duo of Neil Tennant and Chris Lowe perform songs from their acclaimed new album Super, as well as classic hits such as “West End Girls,” “It’s a Sin,” “Always on My Mind” and “Heart.” Tennant and Lowe are also icons in the gay community, with tracks like 1990’s “Being Boring,” which addressed the AIDS epidemic.June 10, Hayarkon Park, Tel Aviv. For tickets: www.tmisrael.co.il or *9964 10. ROCKIN’ WITH ROD
Legendary British rocker Rod Stewart will perform at Hayarkon Park in Tel Aviv on June 14. The 72-year-old musician last performed in Israel in 2010 at the Ramat Gan stadium. As part of his worldwide HITS 2017 tour, Stewart will perform all the megahits from his stellar career, classic rockers like “Maggie May,” “Baby Jane” and “Da Ya Think I’m Sexy?” to big ballads such as “Sailing,” “You’re in My Heart” and “Tonight’s the Night.”June 14, Hayarkon Park, Tel Aviv. For tickets, visit www.leaan.co.il or *8780.
Advertisement
Subscribe for our daily newsletter