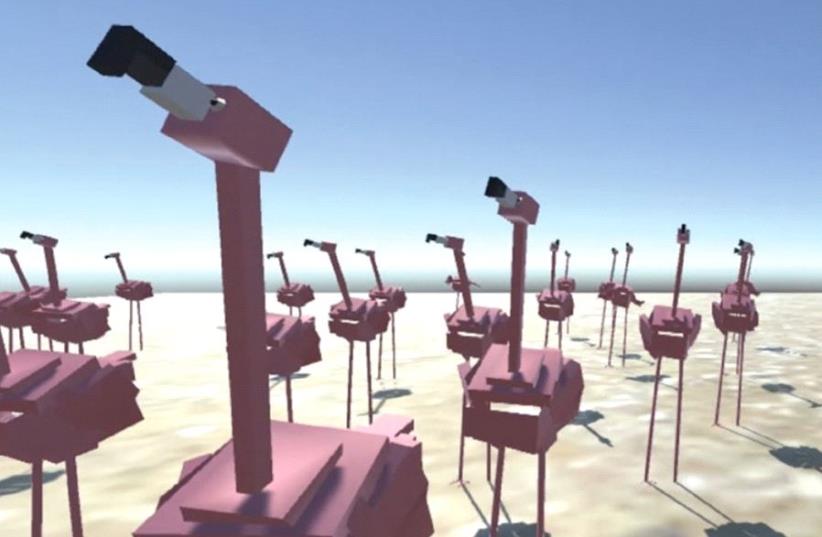 Print Screen Festival at the Holon Cinematheque
(photo credit: PR)
Advertisement
1. POETIC JUSTICE The film All Eyez on Me is the true and untold story of prolific rapper, actor, poet and activist Tupac Shakur, from his early days in New York to his status as one of the world’s most recognized and influential voices. With Demetrius Shipp Jr., Danai Gurira, Kat Graham.2. MARRIAGE, MONEY AND MURDER If you like your dramas all stylish and sun-soaked, then you won’t want to miss the new TV series Riviera. After newlywed Georgina’s billionaire husband Constantine is killed in a yacht explosion, she is shocked to discover the fortune and lifestyle that he had maintained was surrounded by violence, lies and murder. Created by Neil Jordan (The Borgias), the series stars Julia Stiles and Adrian Lester. Starts Sunday, 9:30 p.m. on HOT 3 and HOT VOD 3. BORN TO DANCE As part of the Israel Festival, Lucinda Childs’s company performs her seminal 1979 work, Dance. This hour-long piece, created in 1979, features light, springy, rigorously linear choreography by Childs, one of dance’s original abstract experimentalists. Philip Glass composed the music, and groundbreaking visual artist Sol LeWitt contributed the decor. Live dancers are overlaid by and seemingly mingle with ghost-like, larger-than-life projected images of the original performers. Saturday, 9 p.m., Jerusalem Theatre. For tickets: http://israel-festival.org

4. NOT THE ‘LAST WALTZ’ British crooner Engelbert Humperdinck returns to Israel to perform three concerts around the country. Selling more than 150 million albums worldwide, the 81-year-old Humperdinck has solidified his name as an international pop legend and has established himself as one of the world’s most influential artists. Some of his greatest hits include “The Last Waltz,” “Spanish Eyes,” “Quando, Quando, Quando” and the unforgettable “(Please) Release Me.” Saturday at Haifa’s Congress Center; Monday at Jerusalem’s International Convention Center; and Tuesday at Tel Aviv’s Charles Bronfman Auditorium. For tickets: www.eventim.co.il.

5. THE REEL DEAL The International Student Film Festival will run this week at the Tel Aviv Cinematheque and other theaters around the city. The festival is produced and managed by student volunteers who are passionate about film. The festival features more than 250 films from over 70 films schools from all over the world. The film that opens this year’s festival is the critically acclaimed Polish film All These Sleepless Nights (pictured), directed by Michal Marczak. In addition to the movies, there will be concerts, art exhibits and out & about highlights dining events movies television 7 9 (Avi Ben-Zur) discussions. Sunday through June 24. For more info: www.taufilmfest.com 6. UNITED COLORS The exhibition “Red over Yellow: A Selection from a Private Collection” is on show at the Tel Aviv Museum of Art. The wide selection of works reflects the taste and passion of a private collector, from American minimalism to Italian Arte Povera. The title of the exhibition is taken from a work by Ellsworth Kelly, a leading artist of Color Field painting. Opens on Wednesday. For more info: www.tamuseum.org.il

7. DIGITAL ARTS AND CULTURE This year’s Print Screen Festival at the Holon Cinematheque focuses on the connection between biology, art and digital technology under the title “Animal, Vegetable, Mineral.” The four-day festival draws together artists, technologists and digital culture researchers in an array of programs that includes a wide variety of films, interactive presentations, master classes with international artists, workshops, lectures and panel discussions. Wednesday through June 24. For more info: www.printscreenfestival.com 8. RAISE YOUR GLASS Tel Aviv’s Rothschild Boulevard will come alive with the sounds of wine glasses clinking as it hosts the first Vinum Wine Festival, sponsored by American Express. The festival will feature many wineries of varying sizes and styles from all over the country, such as Carmel, Yatir, Bravdo, Dalton and Tulip. There will be food stalls selling delicacies such as cheese, chocolate and pastries, and live music will provide a relaxed atmosphere. Admission is free. For NIS 60, visitors can enjoy a sampling of five wines plus a selection of cheeses. Thursday, 6 p.m. to 11 p.m.; Friday, 10 a.m. to 4 p.m.9. A ‘B’ IN YOUR BONNET Vertigo Dance Workshop (since 2005) presents Bazir 24, featuring the premiere of B, a dance piece for 10 dancers by choreographer Keren Horesh Begun. There will also be a selection of dance creations by Ohad Naharin and Noa Wertheim, as well as from the repertoire of the Vertigo Dance Company. Thursday and next Friday, Gerard Behar Center, Jerusalem. For tickets: http://vertigo.org.il 10. FALL IN LOVE AGAIN The legendary Tom Jones will swap the “green, green grass of home” for Tel Aviv’s Menorah (Yad Eliyahu) Arena on June 28. The 76-year-old Welsh crooner has sustained his popularity as a live performer and recording artist in a remarkable career spanning more than five decades. He shot to stardom in the 1960s with hits such as “It’s Not Unusual,” “What’s New Pussycat?” “She’s a Lady” and “Delilah.” For tickets, go to www.leaan.co.il or call *8780.