The best activities around the country. 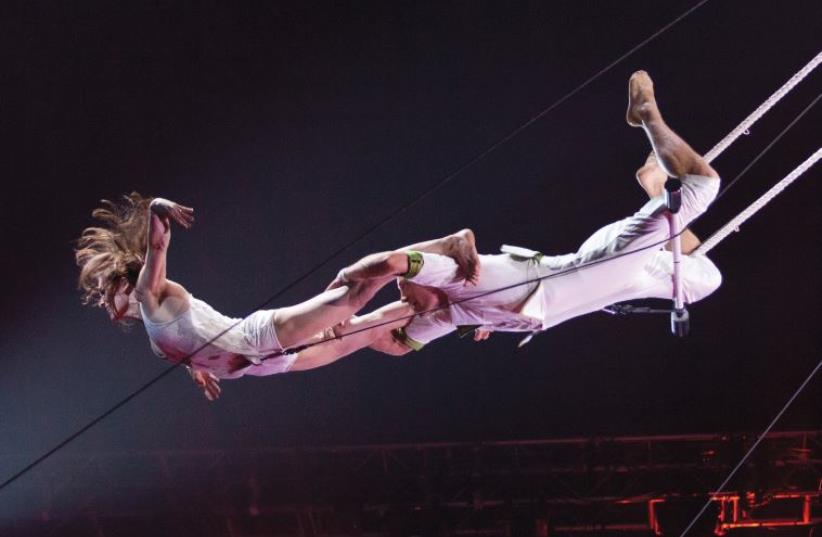 The International Bat Yam Festival
(photo credit: PR)
Advertisement
1. FILM: THE GRAND PLAN The film Kidnapping Mr. Heineken is based on a true story. In 1983, five childhood friends could not make a go of a successful business. As a result, they decided to kidnap the CEO of the largest beer brand in Europe, Alfred “Freddy” Heineken. The film tells the story of the precise planning and execution, the largest ransom ever demanded for an individual and the inevitable aftermath.
2. TELEVISION: BRITISH ARROGANCE Channel 1 will air the British mini-series (three episodes) Mapp & Lucia. The story is set in England of the 1930s in the small coastal town of Tilling. The calm demeanor of the town is cast aside when gossip, changing fashions and arrogance stir up social rivalry, reflected through the two main female characters.Tuesdays at 10 p.m. on Channel 1.
3. THEATER: ABBA THRILLThe successful musical Mamma Mia! returns to Israel for 16 shows as part of its 2015 world tour. Mamma Mia! broke all world records with more than 54 million viewers, 39 productions and 14 languages since its debut in London in 1999. The performance will be in English with Hebrew subtitles.Thursday through September 5 at the Opera House in Tel Aviv. For dates, times and tickets: (03) *9066; www.eventim.co.il.
4. DANCE: THE COLLECTIVEWe, a work by choreographer Bedirhan Dehmen, will be performed by the Turkish Men dance group. In the piece, three male dancers, surrounded by the audience, alternately move in close and constant touch to moments of individual outbursts of energy. They dig deep into their memories and bodies, striving to explore what binds “us” together, what makes “us” move.Thursday August 26 at 9 p.m. and Friday August 27 at 2 p.m. at the Suzanne Dellal Center in Tel Aviv. For tickets: (03) 510-5656; www.suzannedellal.org.il.
5. MUSIC: GRAND CONCERTAn extraordinary concert will feature eight pianists and seven grand pianos.The performance will present a musical journey through Bach’s compositions to the popular compositions of Rami Kleinstein and Shlomo Gronich. Among the participants are pianists Leonid Petashka and Victor Stanislavsky and soprano Daniela Lugasi.Thursday at 8 p.m. at the Mann Auditorium in Tel Aviv. For tickets: (03) *9066; www.eventim.co.il.
6. MIXED BAG: SAND AND BUBBLES The Netanya Municipality invites the public to a special summer happening of sculpting in the sand and creating large soap bubbles at Sironit Beach.Before the summer holiday ends, the beach will be adorned with spectacular sand sculptures.Tuesday at 5 p.m. at Sironit Beach, Netanya. For more information, visit www.netanya.muni.il/eng/.
7. BEER WITH STYLE The largest beer festival in Israel will take place in Jerusalem. The two-day festival will include musical performances by Hadag Nahash and Mercedez Band, DJ sets before and after the shows, a debut of the T Market (a Tel Aviv fashion show dedicated solely to T-shirts) and tastings of 120 types of beer, local and international.Wednesday and Thursday (August 26 and 27) at 6 p.m. at Independence Park in Jerusalem.For tickets, see www.jerusalembeer.com/en/.
8. STREET ART The International Bat Yam Festival will feature more than 30 local and international performances of theater, circus, dance, clowns, acrobatics, music parades, displays and more, including the French show Les Girafes, featuring eight-meter high giraffes, accompanied by an opera singer. The site will also offer free camping on the beach Wednesday, Thursday and Saturday (August 26, 27, 29) from 7:30 p.m. to midnight at the Bat Yam Promenade. For more information, call (03) 561-0288.
9. BY THE SEASHORE Jaffa Port will run a Friday fair of live music, theater performances for children children, dance shows, an urban designers’ market, an art site for children, food stalls, shiatsu next to the sea, a reflexology site and more. The queen of Israeli funk and soul Ester Rada will perform.Friday at 10 a.m. (children’s play at 12:30 p.m. and live performance at 3 p.m.) at Jaffa Port. For more information, visit www.namalyafo.co.il.
10. CHILDREN ADVENTURES IN BABYLON The Bible Lands Museum will host theatrical activities in its Babylonian Village. Children can embark on a journey down the River of Babylon with a mysterious fisherman, encounter obstacles and resolve challenging tasks.At the end of the journey, they will go to the village, where they can partake in cooking, crafting, fishing and knitting workshops.Sunday through Thursday at 10, 11 a.m. and noon at the Bible Lands Museum in Jerusalem. For more information, call (02) 561-1066.
Advertisement
Subscribe for our daily newsletter