Cerveceria serves Spanish-style tapas that are second to none. 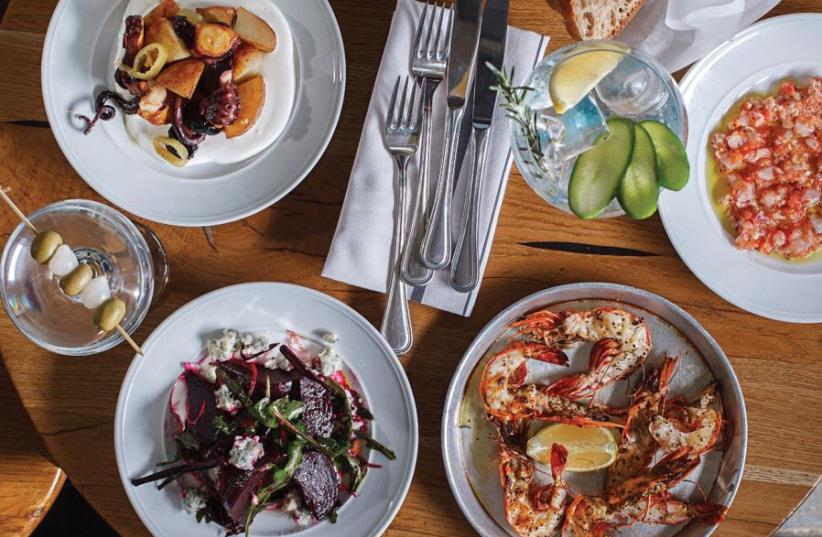 Cerveceria
(photo credit: PR)
Advertisement
Although the name of the cozy bar-restaurant Cerveceria implies that beer is the drink of choice (cerveza means “beer” in Spanish), there is – rather surprisingly – only one imported beer on tap and just a few in bottles. But there is a full bar, including a reasonable wine list with nine vintages available by glass, and an intriguing list of 15 specialty cocktails in five categories.The alcohol menu evinces a definite bias towards gin, as 13 of the specialty cocktails feature that particular spirit – even the mojito (NIS 44), where gin replaces rum and is mixed with sherry, lime, sugar, mint and tonic water. I have a problem with the Israeli penchant for labeling all sorts of cocktails “mojitos”; but at least this creative blend was refreshing and delicious, despite being misnamed.Cerveceria’s Benyehuda Mule (NIS 48), meanwhile, combines gin with lime, Rosso Antico, almond syrup, ginger beer and Fernet Branca. Garnished with a wedge of fresh orange, this drink was no less refreshing than its companion, with a bit of added kick from the ginger.As we sipped our drinks and perused the menu, we enjoyed munching on the crusty house bread, served with soft European butter and sea salt. Fortunately, we resisted the temptation to fill up on the bread, as it complemented nicely several of the tapas to follow. The bilingual food menu, which consists entirely of tapas, changes daily, according to the market ingredients deemed freshest by the chef that day. The three categories of tapas are Vegetarian (NIS 26-46), Fish and Seafood (NIS 36-76) and Meat (NIS 36-92).We began our tapas exploration in the vegetarian category, starting with asparagus and mushroom topped with an over-easy fried egg sprinkled with crumbles of Manchego cheese. The al dente baby asparagus, sauteed mushrooms, half-cooked yolk and zesty cheese added up to a wonderful interplay of flavors.Of the three calamari dishes in the fish and seafood category, our waitress recommended yet another dish topped with fried egg, sunny side up this time. The extremely fresh grilled purple calamari, accented with garlic and parsley and bathed in runny egg yolk, made for a great filling between two slices of the house bread.Still, the star of the fish and seafood tapas were the grilled giant shrimp. These impressive crustaceans, split in the shell, were perfectly seasoned and fingerlicking good.Our first meat dish was prosciutto de Paolo, a generous portion of thinly sliced dry cured Italian ham that was obviously sourced with expert care. In this instance, the kitchen had the good sense to leave the uncooked ham alone and let the superior quality of the raw material speak for itself.The chef’s talents came to the fore again with our order of two final meat tapas: the lamb chops and the flank Stroganoff. The former were two small but meaty lamb steaks basted in beef broth.The lamb chops were positively succulent, and the accompanying roasted fennel an inspired choice as the side dish.The latter was shredded premium flank steak in a Stroganoff sauce of sour cream perked up with mustard. We used the last bit of bread to mop up every last drop of the rich sauce studded with mushrooms.There were only two desserts (NIS 40-42) on the daily menu: churros and Negroni granite.It took a while for the churros to emerge from the oven; but when they did, they were the finest example of the Spanish pastry I have had in Israel: crispy on the outside and fluffy on the inside, with just the right amount of cinnamon-and-sugar dusting. The sweet, warm sticks came with dulce de leche for dipping. The treacly caramel sauce was not strictly necessary for the enjoyment of the main event, but diners with a sweet tooth will find that this confection puts the dessert over the top.The granite, a frozen grape sorbet, was bursting with flavor, and a consummate palate cleanser.

The writer was a guest of the restaurant.Cerveceria Not kosher 48 Ben-Yehuda St., Tel Aviv Tel: (03) 647-7751
Advertisement
Subscribe for our daily newsletter