Top ten things to do 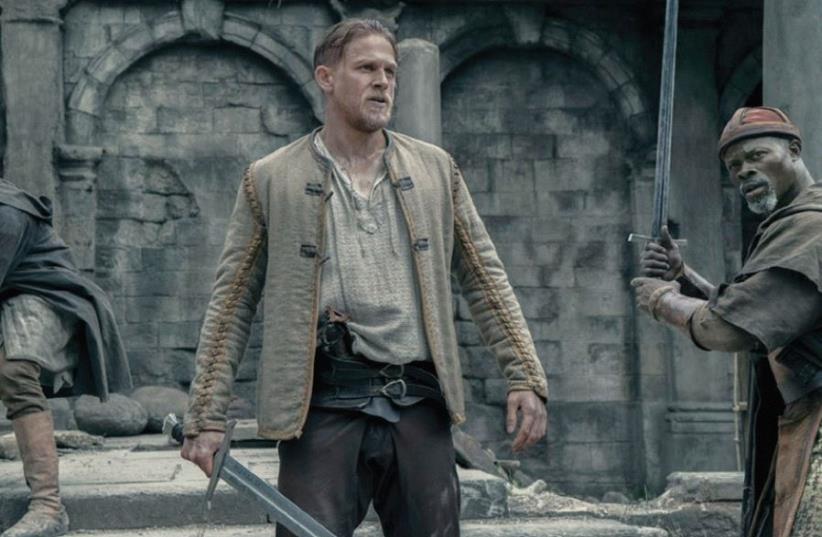 King Arthur: Legend of the Sword
(photo credit: PR)
Advertisement
1. FIT FOR A KING Acclaimed filmmaker Guy Ritchie brings his dynamic style to the epic fantasy action adventure King Arthur: Legend of the Sword. Robbed of his birthright, Arthur comes up the hard way in the back alleys of the city. But once he pulls the sword from the stone, he is forced to acknowledge his true legacy – whether he likes it or not. With Charlie Hunnam, Djimon Hounsou, Jude Law, Eric Bana.

Tomorrow at 10 p.m. on HOT HBO and HOT VOD 3. SEATING ARRANGEMENTSA special exhibition will coincide with the beginning of the construction of the Beit Lessin Tower in the old north of Tel Aviv. This is a special salute by Tal and Eyal Fridman of GF Real Estate to the legendary Beit Lessin Theater that used to operate at that location. Curated by artist Rachel Sharpstein, the exhibition brings the old seats of the theater back to life thanks to 14 Israeli artists and interior designers.Until May 14 at 30 Weizmann Street, Tel Aviv.4. HOORAY FOR BOLLYWOODThe vibrant Indian stage musical Passage to Bollywood returns to Israel once again, with performances in Jerusalem, Tel Aviv, Haifa and Omer.Staged by the Navdhara India Dance Theater, Passage to Bollywood includes a cast of 22 dancers who, during the course of the show, put on 80 different costumes and go through their paces to a background of stirring numbers that span a wide range of emotions.May 17 through 20. For tickets: www.eventim.co.il

5. GYPSY MAYHEMBrace yourselves for the notorious onstage antics of the Balkan gypsy punk band Emir Kusturica and the No Smoking Orchestra. Offering what has been described as a musical circus – complete with a conventional rock band set-up embellished by everything from sax and tuba to exotic percussion – encompassing Balkan gypsy, punk, klezmer and everything in between, the show is extravagantly diverting.May 11 at 9 p.m., Caesarea Amphitheater; May 13 at 9 p.m., Sultan’s Pool, Jerusalem. For tickets: www.eventim.co.il6. JAZZING WITH JACOB Jacob Collier grew up in a family of musicians, which greatly influenced his prodigious musical talent from a young age. Based in the UK, the 22-year-old has a unique sound that combines elements of a cappella, jazz, groove, funk, classical, Brazilian, gospel, soul and more for a harmonious finished product that has earned him two Grammy nominations.

May 15 at 8:30 p.m., Barby Club, Tel Aviv7. PEDAL AWAY! Next Friday, Jerusalem drivers will make way for the cyclists of the city as more than 7,000 cyclists take to the road in Sovev Jerusalem, one of the largest cycling events in Israel. Some 20,000 spectators are expected to line the streets, and participants choose one of four cycling routes that go past the city’s main attractions and surrounding parks.May 12. For all the info and registration: www.sovevjerusalem.co.il 8. CALLING ALL MUSIC LOVERS Well-established ensembles from Israel and abroad join young musicians in a six-day lineup of concerts featuring everything from world music, swing, jazz and fado to chamber, instrumental and vocal music at the 19th annual Felicja Blumental International Music Festival. Among the international participants are the Cologne Guitar Quartet from Germany. Some of the local artists include the Gilad Ephrat Ensemble, Swing de Gitanes (pictured) and Ziv Plesser.May 15 through 20, Tel Aviv Museum of Art. Tickets and info: http://en.blumentalfestival.com 9. MUSEUM MUSINGSTo mark International Museum Day, held annually in May throughout the world, the Israel Council of Museums (ICOM) and museums around the country are offering the public free entry to some 70 museums in Israel on May 15. Some of these museums include the Israel Museum and the Bible Lands Museum in Jerusalem, the Israeli Cartoon Museum in Holon, Haifa’s Museum of Art and The Clore Garden of Science Museum in Rehovot.For more info: www.icom.org.il 10. ETERNAL LOVEThe Kibbutz Dance Company presents its latest piece, Mother’s Milk. This newest performance by artistic director and choreographer Rami Be’er is dedicated to his late parents, Shosha and Menny Be’er, who were Holocaust survivors. The show deals with relationships and unconditional love. Featuring the music of James Blake, Bach, Peter Sellers and Tiny Fingers.

Premieres on May 14 at 8:30 p.m., Performing Arts Center, Herzliya. For tickets: www.kcdc.co.il