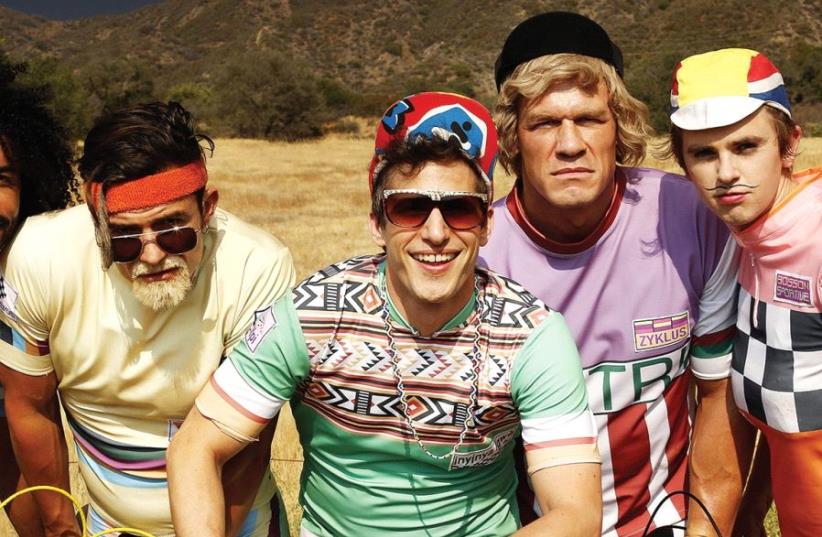 ‘Tour de Pharmacy’
(photo credit: PR)
Advertisement
Except for the huge number of big name performers and the graphic nudity, the HBO sports mockumentary Tour de Pharmacy, comes across as little more than a good Saturday Night Live sketch. Not great. Just good. The jabs taken at doping in the sport of cycling are generally funny but just like an SNL sketch that has run too long, the material feels thin by the end.Tour de Pharmacy looks at 1982 when what is being called – by writer Murray Miller (Girls) and no one else – the biggest year in cheating in cycling history, unfolded at the Tour de France. There was so much cheating that after the first day only five riders remained.Director Jake Syzmanski uses a documentary style to follow the small group of riders as they spend weeks racing across the European countryside. Footage of the race, which was supposed to have been shot by a BBC crew with James Marsden playing the reporter who covers the entire event, reveals the absurdities that unfold along the way.These elements are played out by the casting of some very impressive names including Kevin Bacon, Freddie Highmore, Julia Ormand, Jeff Goldblum, Andy Samberg (who also executive produced), John Cena, Dolph Lundgren, Daveed Diggs, Danny Glover and Maya Rudolph.The casting is the most interesting part of the production as different actors play the riders in 1982 and today. Samberg and Goldblum both play the first African cyclist to enter the Tour de France. Although representing the continent for the first time, the entry is not popular back home as his connection to Africa is through his father’s work with a blood diamond mine. Diggs and Glover play the same relative of Jackie Robinson who’s convinced winning the Tour de France will eclipse Robinson’s history-making days in major league baseball.The weirdest casting is having Highmore and Ormand play the same cyclist. Because women weren’t allowed to compete in the race, the female cyclist had to pretend to be a man. Highmore plays a female in disguise camping it up with a pencil-thin mustache and an overly aggressive reaction to women.Miller’s script is idiotic and silly but does have the kind of slight ring of truth that mockumentaries need to make the genre work. Syzmanski helps by filling the story with well-known sports figures including announcer Joe Buck, cycling lover turned boxer Mike Tyson and Lance Armstrong.The inclusion of Armstrong ads a surreal element to the production as his seven victories at the Tour de France were marred by a doping scandal. His role in the mockumentary is as a “secret” source who is supposed to only be shown in shadows and with a distorted voice. One of the production’s least original ideas has lights popping on to show Armstrong’s face.That segment is weak and the ending is thin but there are plenty of big laughs along the comedy trek with director J.J. Abrams leading the way.This is the second collaboration between Samberg and Miller to create a project for HBO. Their 2015 mockumentary, 7 Days in Hell, followed a famous (and very fake) tennis match that lasted seven days. Tour de Pharmacy got some help from having more central players to share the comedy load. The material with Abrams shows how smart the mockumentary can be at times. It just doesn’t remain at that high level until the end.The best mockumentaries, such as the British version of The Office, featured smart writing from start to finish. They never had to resort to the kind of immature humor that pops up in Tour de Pharmacy, when the story seems to have slipped its chain. Showing a naked man being spun around in the air is good for a giggle but is more of a sign of lazy writing than trying to be original. More consistency would have made Tour de Pharmacy a mockumentary to lead the pack rather than being stuck in a peloton of middle-of-the-road productions.