Avni says he is happy working in every medium, but that he sees the stage as a particular challenge. “Onstage, you’re naked,” he says. 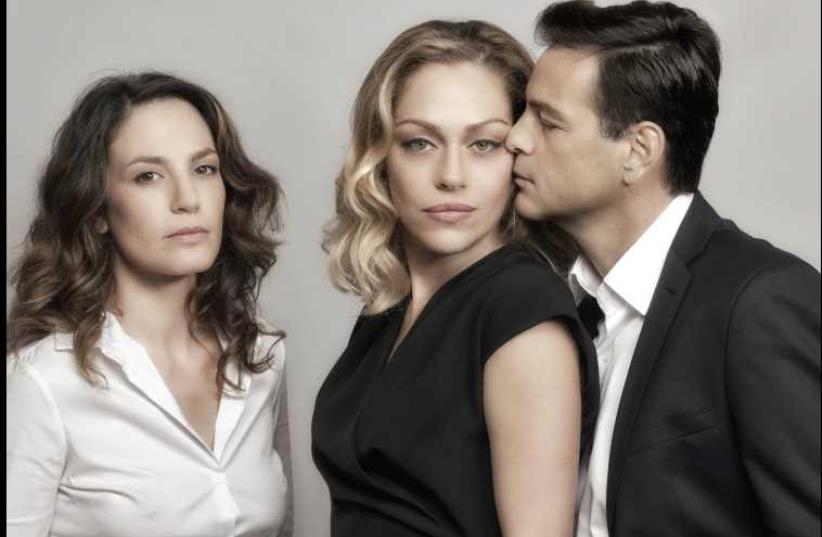 RETURN OF the bunny boiler: From left; Riki Blich, Osnat Fishman and Aki Avni star in Habima’s production of ‘Fatal Attraction.’
(photo credit: HIZOUR GORALI)
Advertisement
Aki Avni, one of Israel’s most famous actors, currently starring in Habima’s stage production of Fatal Attraction, says the show is “a story about the option of having alternative lives... People always wonder what would happen if they had a different job, or weren’t married to this or that woman or man.”Fatal Attraction will be performed at the Habima National Theater in Tel Aviv from May 10-12, and May 14 and 16, and then on June 23 and 24, with English subtitles on May 12, May 16 and June 23, and then again on July 16, 17 and 30. It will be performed at the Jerusalem Theater in the capital on May 21 and 24, and then again in July, with performances subtitled in English on July 7 and 8.If you remember Fatal Attraction as the 1987 movie starring Michael Douglas and Glenn Close, you might have thought it was about a married guy who thought he could get away with a one-night stand, only to have his psychotic lover stalk him and his family, but Avni sees it from an actor’s point of view.“We think about our lives from moment to moment,” he says. “But it could all go another way.”Life has gone in some interesting ways for Avni, who in the early 2000s was Israel’s most promising young actor, and a heartthrob as well. He starred in Joseph Cedar’s feature film Time of Favor (known in Hebrew as Ha Hesder), as a yeshiva student who discovers his rabbi and some of his fellow students are involved in a plot to destroy the Aqsa mosque. Avni won the award of the Israel Academy for Film (which wasn’t yet known as the Ophir Award) for his performance. In addition to the political thriller, the movie was also a tender love story, with Avni’s character in love with the rabbi’s daughter, a feisty young woman played by the actress Tinkerbell. The film, which won seven Israeli Academy Awards, heralded the beginning of the renaissance in Israeli film, and Avni received great acclaim, and offers to come to Hollywood.“That movie opened a lot of doors,” he says.He and his then wife, model-actress Sendi Bar, with whom he has a son, headed off to Los Angeles with great fanfare. Avni had small parts in several American television series and films, but Hollywood is not an especially welcoming place for actors with accents – only about one per generation makes it big, and right now it’s Javier Bardem – so he returned home, where the Israeli entertainment industry was thriving, in 2008.After making a few commercials mocking his Hollywood interlude, he got back to work in earnest, with a starring role in the popular television series, Maybe This Time, and in such movies as Black Light (2009) and The Fifth Heaven (2011). He also branched out into stage work, starring in the Cameri Theater’s productions of Cabaret and Frost/Nixon.Avni says he is happy working in every medium, but that he sees the stage as a particular challenge. “Onstage, you’re naked,” he says.Fatal Attraction, in Avni’s eyes, is “not a story about a psycho and a victim.” Working with Osnat Fishman, who plays the femme fatale role that Glenn Close had in the movie, “We found out that it’s necessary for them to develop a love story. The story wouldn’t play out the way it did if they didn’t fall in love with each other. So we found the love story between them. That was very important.”Avni also found a new love story a few years ago in his own life, with American fashion designer Nicole Miller, whose clothing has been worn by such celebrities as Angelina Jolie and who also has a successful sunglasses brand. Miller, who spent her high school years in Israel, now lives here and the two had a daughter six months ago.Happy to be working at a breakneck pace, Avni recently finished shooting Damascus Cover, an espionage drama based on the bestselling novel, starring Jonathan Rhys-Meyers and John Hurt, in Morocco. He’s also working on Hamidrasha, a new television series about cyber crime, and is appearing in a special program about Mozart’s Requiem with the Israel Philharmonic Orchestra and several opera singers.In addition, he is busy with his own production company, developing a movie and a oneman stage show.“It’s a privileged experience, working so much on so many great projects,” says Avni.