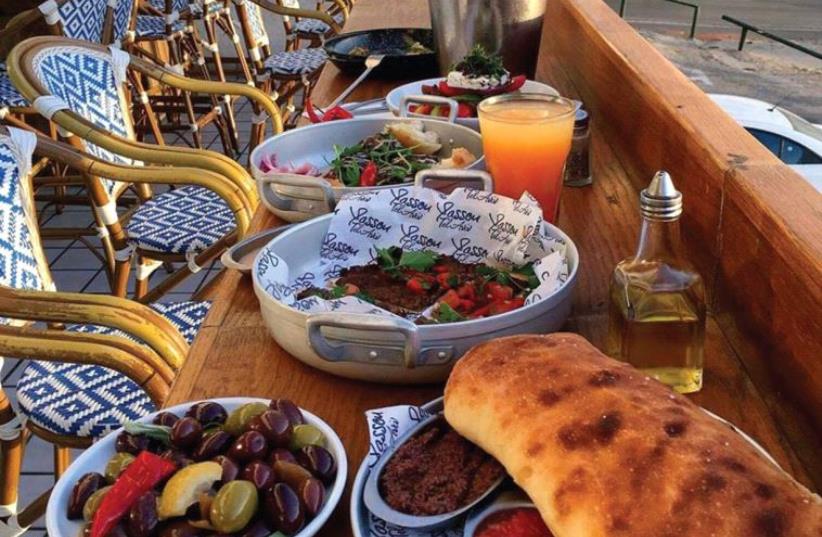 Yassou restaurant
(photo credit: PR)
Advertisement
In the middle of a hectic work week, nothing sounds better than a relaxing evening by the seaside. Thankfully, the popular Greek restaurant Yassou, situated across the road from the Tel Aviv promenade, is a soothing mix of calm and class, with rolling waves just beyond your table.A sleek long bar functions as the centerpiece of the restaurant, and customers can sit there for a quick drink or at one of the surrounding tables. One can also enjoy the outdoor open terrace with a scenic view of the Mediterranean, which plays host to live music on Friday afternoons and Sunday nights.Yassou’s eclectic menu is a collaboration between renowned chef Aviv Moshe, known for his popular restaurants Messa and Quattro, and chef Ivan Maslov (formerly of Topolompopo), who has been the operating chef for a little over six months.Over the next few months, the restaurant is offering a special sunset menu (7 p.m. to 9 p.m.) for NIS 98. One can choose from a variety of starters in smaller portions, as well as a main course.As a result, the restaurant was packed with young people Chef Ivan really wanted to make sure we had a good time, so he invited us to do shots of ouzo after each course. In the laid-back spirit of the place, he joined in with most of the rounds of shots. He then gave us some basic education in what dishes we should try if we wanted a true experience of Greek food.We started with Yassou’s delicious homemade frena bread (NIS 28) accompanied by fresh tomato paste with baked garlic oil and Kalamata olive tapenade. This was followed by a traditional Greek salad (NIS 54) that consisted of delicious feta cheese (from the Hameiri Tsfat Dairy), olives and tomatoes and a wonderful blend of vinegar and olive oil with some spices.Next up was dolma vine leaves (NIS 46) on a bed of tzatziki with crispy baby zucchini. The combination of the vine leaves with the tzatziki made it irresistible. The zucchini was sliced thin and made crispy along the edges. It had the perfect balance of sweet and salty.Yassou’s tomato pan (NIS 56) consisted of soft, creamy buffalo mozzarella slices and seared cherry and field tomatoes that tasted as if they were just picked, topped with shredded basil and presented in a mixture of thyme caramel, blue cheese fondue and aged balsamic vinegar – the embodiment of summer.We were then presented with a wild mushroom polenta (NIS 48).The polenta was everything you’d want it to be and more. It was soft, creamy, delicious and not at all dry or grainy. The mushrooms were seasoned expertly, allowing the earthy flavor to mix with the Parmesan strips.After a bit of a breather and some more ouzo shots, it was on to the mains. First up was the silver sea bass fillet (NIS 124) on a bed of labaneh and potato cream, vine leaves, sage butter and fire burnt pepper salsa. The fish was seasoned beautifully and grilled to perfection.The crispy skin was an extra plus.This was followed by a wild mushroom and truffle risotto (NIS 78). This dish had just the right balance between the hard and soft texture of the rice, tasty mushrooms, seared cherry tomatoes and croutons. I was in heaven. The flavors were spot-on, and the aroma ever so fragrant.Definitely a winner.Last, we tried the shwarma pizza (NIS 64). This was tasty – nicely spiced and appropriately gamey – but supremely messy. A fork and knife came in quite handy.Already bursting at the seams, we valiantly strove on to dessert and tried the delectable banana waffle topped with ice cream, meringue and fresh strawberries, drizzled in chocolate.We left very satisfied with what we’d eaten, what we’d seen and where we’d dined.The writer was a guest of the restaurant.Yassou
Not kosher
105 Hayarkon Street, Tel Aviv
Tel: (03) 603-1719