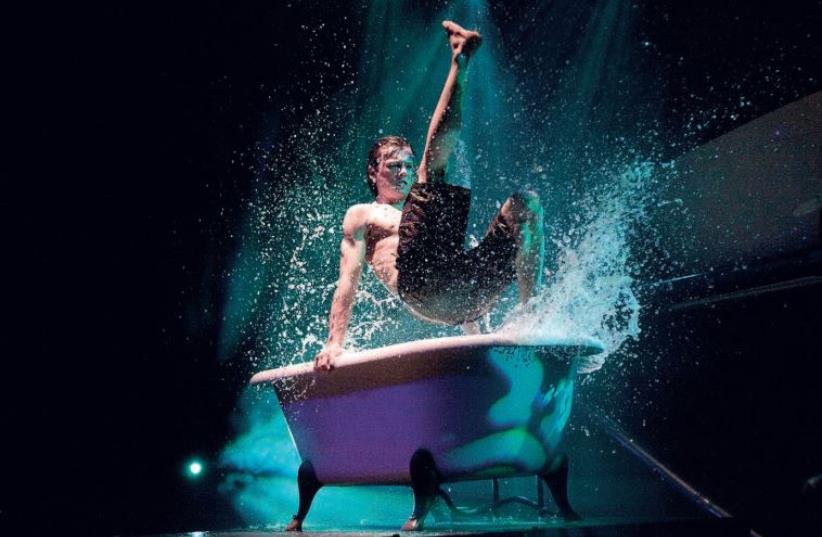 'Soap' opera in Israel
(photo credit: ANDY PHILLIPSON)
Advertisement
Mention detergents in the context of entertainment, and most people would naturally assume there was some melodramatic soap opera offering afoot. But the extravaganza that Maximilian Rambaek will dish up for audiences at the Tel Aviv Performing Arts Center between October 27 and 31, called Soap , is the real thing. There will be suds and water galore on the TAPAC stage at the half dozen performances, not to mention spectacular acrobatics, cabaret, comedy and some visual effects that should keep the audiences’ eyes fully dilated and jaws duly dropped.At the age of 36, Berlin-based Rambaek belongs very much to the here and now, although he also feeds off professional climes of a very different era. He also earned his directorial spurs and learned the business before taking over the reins. “I started working in the theater world in my early 20s and worked in all kinds of departments, from stage management to producing and directing,” he says. “When I was 27, I decided to put my main focus on directing shows. The place I made my first steps is called Ufafabrik, which is a cultural center for different kinds of stage works, from concerts to circus and serious dramatic plays. I think that is one of the reasons that I find myself today working in modern circus, or vaudeville, what we call varieté.”Rambaek, who devised the show with Markus Pabst, says he is drawn to the eclecticism of his chosen performance format which, he notes, allows him to flow almost every which way, as long as the patrons are happy. “Varieté, or variety, is the number one genre when it comes to mixing and fusing different styles of theater genres. As long as people are entertained, it allows you to do almost whatever you want. Soap is a great example of that. Yes, it is a modern circus show, but it combines so many different stage styles like revue, modern dance, classical variety and opera,” he explains.The German creator put together an eight-member cast to get the dazzling job done. These include acrobats, jugglers, a clown and a singer. The visual action is complemented by a soundtrack that takes in numbers from the likes of Canadian singer- songwriter Patrick Watson, 1970s German experimental rock band Can, 1990s alternative L.A.-based metal outfit Tool, American soul duo Gnarls Barkley and even an opera slot courtesy of Puccini.Rambaek believes that the net result is very much the sum of its diverse parts. “You can see that the variety is so rich that, in the end, a unique style results. Due to that, the emotions are changing on stage from euphoric, romantic, happy and melancholy moments. This is a modern circus show like an emotional roller coaster ride where young and old will both have their joy and find their favorite moments,” he says. With an accrued audience of more than 1.5 million since the show started off on the global circuit eight years ago, Rambaek and Pabst clearly hit on a multifarious recipe for success. While the end product may tend toward the sensational, the concept was born from the most mundane of daily requisites – keeping clean. “When we first started sketching scenes, we thought, ‘When do people take a bath and what emotional state are they in?’” explains Rambaek. It appears that common ablutions involve much more sentiment than initially meets the eye. “The range of emotions was so large that it was very inspiring to build little scenes around that,” continues the co-creator.” You sometimes take a bath when you are melancholic and sad, sometimes when you just want to relax and maybe even light a candle, sometimes before you go out to listen to music, and sometimes not alone...” That, apparently, left Rambaek and Pabst with plenty of room for artistic maneuver. “We didn’t want to create a defined genre. With all the mentioned emotions and styles, we kept our creative freedom to create a fusion show that, as a result, became something unique. I think that is one of the reasons why Soap , after these many years, is still playing and contemporary.Bath time may never be the same.Soap will be performed at TAPAC on October 27 to 31. For tickets and more information: (03) 692- 7777 and www.israel-opera.co.il