Up close and very personal with ‘Bobbi Jene’

After 10 years with the Batsheva Dance Company, Bobbi Jene Smith decided to return to the US to find her own way as an artist. 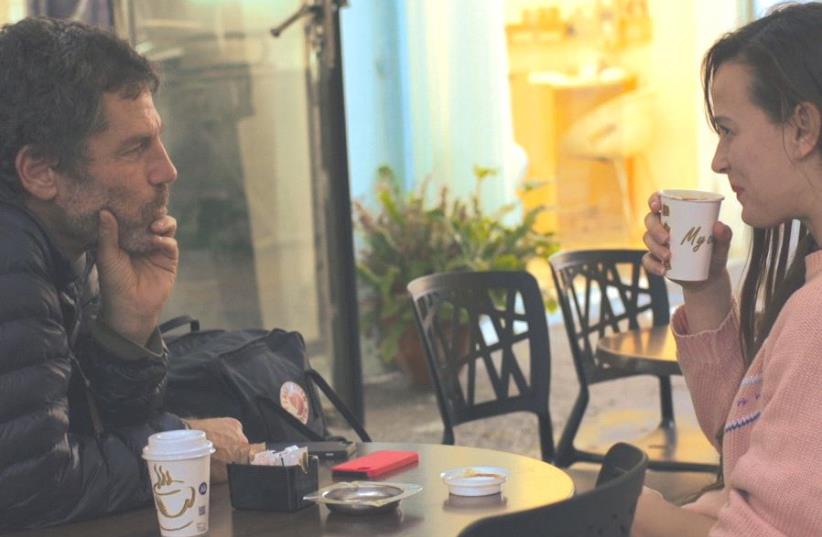 AMERICAN DANCER Bobbi Jene Smith (right) seen here with Batsheva Dance Company artistic director Ohad Naharin in the documentary ‘Bobbi Jene.’
(photo credit: DOCAVIV)
Advertisement
It’s rare to see an Israeli audience sit in total silence when it is invited to ask questions, but that was what happened following the screening of Elvira Lind’s documentary Bobbi Jene at Tel Aviv Cinematheque in the Docaviv Festival on Sunday night.Bobbi Jene Smith, the former Batsheva dancer who is the subject of this intimate and compelling portrait, was present, but the appreciative audience, which burst into applause following the film, didn’t have anything to ask her, because – and this is rare, even among good documentaries – the movie said virtually everything.A moderator from the festival stepped in, asking Smith how it felt to be the subject of a documentary. Smith replied that it was “terrifying,” but she said it in her soft, midwestern- accented voice, with a dazzling smile; even a terrified Smith projects charm and self confidence, and is not quite like anyone else.Lind’s remarkable documentary won the Best Documentary Feature Award at the recently concluded Tribeca Film Festival, as well as awards for cinematography and editing.It follows Smith’s journey from Batsheva star in Tel Aviv to triumphant choreographer and soloist in the US, as well as examining how Smith’s background and personal life inform her work.Born and raised in Iowa, Smith was drawn to dance from her childhood – the movie shows photos of her in all-American dance recital costumes and full, glittery makeup – and went to study at Juilliard, the premiere arts school in the US. When Ohad Naharin’s Batsheva dance company came to perform there, Smith knew immediately that she wanted to dance with them.“I didn’t even have a passport,” she recalls in the film.But she got one, and danced with the company for a decade. She blossomed under the artistic guidance of Naharin, the subject of the Heymann brothers’ acclaimed documentary, Mr. Gaga, and became an expert in his Gaga dance technique, which mines the essence of each movement, and which she now teaches.The two had a personal relationship as well, as Bobbi Jene makes clear, and were lovers for several years. While they are no longer together, he has been a guiding force in her life, and his teaching will always be a key influence on her.Although she is now in a relationship with Or Schraiber, a gifted Batsheva dancer from Jerusalem who is 10 years her junior, in 2014 she decided it was time to head back to the US and work on her own choreography.The film revolves around her dilemmas: how to build a career of her own, virtually from scratch, and, more important, figure out what she wants to say through her choreography; make a long-distance relationship with Schraiber work; and reconnect with her traditional family.All of this would be no more than interesting if Smith didn’t possess a phenomenal and original talent, as well as the kind of charisma that makes you hang on her every word and gesture.The film opens with an arresting shot of her naked, performing A Study on Effort, a mesmerizing hourlong solo piece that has drawn rave reviews all over the world. She returned to Israel for its premiere at the Israel Museum in 2015, and I was fortunate enough to see one of the first performances, which is shown in the film, one which actually drew Naharin out of Tel Aviv. He may travel the world, but you won’t see him in Jerusalem very often.Reflecting on the success of the piece, Smith notes how, in the dance world, there is no big payoff as there is for an acclaimed piece of art in any other field. You don’t win prizes, money or contracts, but must simply be satisfied knowing that “a few people saw it.”Some of the film’s most interesting moments show Smith working on this piece, at times in a studio but at other moments in New York City playgrounds, as she pushes her muscled body against a wall while a group of guys plays handball nearby. She is completely focused and doesn’t seem to be aware that they are there.The movie contrasts her single- minded focus on her work with her slowly dawning awareness and confusion over other aspects of her life. She says she has never thought much about the future before, but she wonders what will happen to her relationship with Schraiber when she is 40 and he is 30. Her parents are resigned and supportive of her, but don’t quite get where she is coming from. When she remarks that a framed picture on the wall of her parents’ home showing Jesus shadowing a baseball batter is creepy, the conversation quickly moves into a discussion of whether there ought to be a picture of Jesus with a dancer, as the two avoid an argument over values. Her mother understands and seems to accept that Smith never wants to have children, but her parents are understandably uncomfortable with the idea of watching their daughter perform nude.Where Smith herself gets the guts and drive to do this is a question the movie asks but can’t answer. Lind, whom Smith said she met “through a friend of mine” – Oscar Isaac, the actor who was a Juilliard classmate of Smith’s and who is the father of the baby Lind gave birth to last month – wisely steps back and lets Smith be Smith. The result is a wild and fascinating ride.The Docaviv, the Tel Aviv International Documentary Festival, runs through May 20. ‘Bobbi Jene’ is set to be screened on Channel 8 on a date to be announced.