Winner of Holocaust survivors' beauty contest: The Jew will never disappear from the world

Sixteen survivors take to the catwalk in third annual beauty contest in Haifa.

Holcoaust survivors' beauty pageant
Advertisement
Israel held its third annual beauty contest for Holocaust survivors on Tuesday, with organizers and participants hailing it an affirmation of life.Sixteen women from European origins who survived the Nazi genocide took to the catwalk before a crowded town-hall in the northern port city of Haifa.Make-up artists and hairdressers attended to each contestant, who said they felt like a queen for a day. The elderly women each took a bow to a round of applause and were then given the opportunity to share their personal story dated back to the Holocaust.'Helping Hand' organization, a privately funded group that aids thousands of the estimated 200,000 Holocaust survivors living in Israel and operates a 'Home for Holocaust survivors', organized the festive beauty pageant.The executive director of 'The International Christian Embassy Jerusalem' , who supports the organization, said he hopes the event is one way to help heal the wounds of the survivors."This is a very important event, where tonight Holocaust survivors have the opportunity to experience something which they missed in their childhood. Many of them they were children or teenagers or young adults during the Holocaust. They were either in Ghettos or in concentration camps. So this night is giving them something back which they never could experience when they were young. If you look at the faces of the Holocaust survivors and the joy and the happiness, you see it's an evening that's really healing some of their wounds which they bring with them. And for us as Christians it's a great privilege, especially for me from Germany, to be able to contribute something to this evening, to give back something what Christians in Europe were taking away from them," Jurgen Buhler said.The organizers of the event said that every year participants are overjoyed to take part in the pageant despite criticism of some detractors who see it as cheapening the memory of the 6 million Jews killed in the Holocaust during World War Two.One of the judges in the contest, journalist Lihi Lapid, said she was touched by the women's willingness to celebrate life."I think we chose them by their will for life, by their energy. They were so happy to be there on stage and to tell their story . Each one of them wanted and mentioned the fact that she is here because she wants us to remember and to talk about it and to never forget. And there was something so touching by the way they just wanted us to understand that we need to celebrate life," she said. 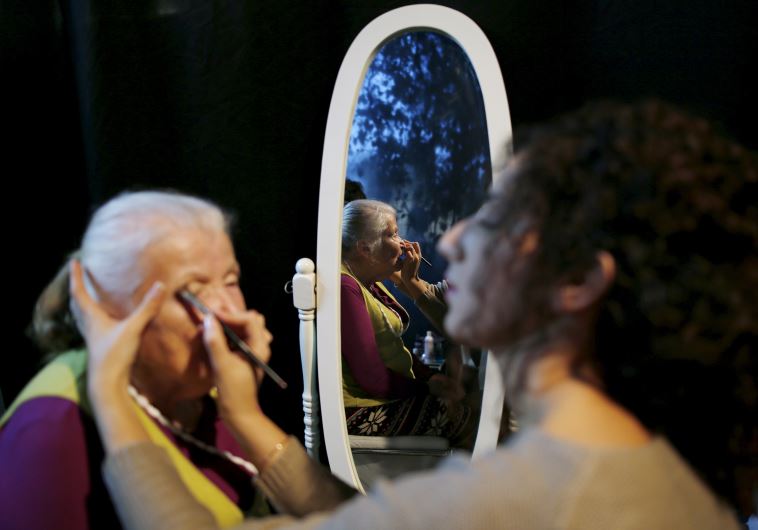 Sarah Israel, 85, preparing for contestThe contest winner, silver-haired Romanian-born Rita Berkowitz, 83, regaled with a blue and white sash as a tiara was placed on her head. She said she wanted to "deliver a message to the entire people of Israel. That all Jews from all across the world will come (to Israel), all of them. And we shall be stronger. We are not afraid of anyone. The Jew will never disappear from the world."Berkowitz was 7-years old when World War Two broke out. After the horrors of the Holocaust, she immigrated to Israel in 1951 and got married. She has a daughter, six grandchildren and five grand grandchildren, the organizers said.