Women behind bars, girls on stage 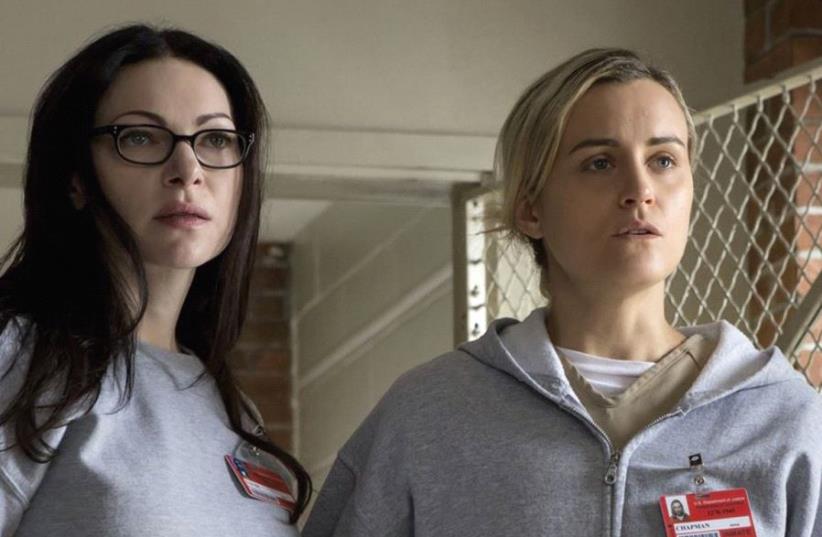 Orange Is the new black
(photo credit: PR)
Advertisement
By now, you know whether or not you want to lock yourself away with the ladies of the Litchfield Correctional Facility whenever a new season of Orange Is the New Black is released. All 13 episodes of Season Five just became available on HOT Xtra VOD and are airing on HOT HBO from Sunday to Thursday at 10:50 p.m.The new season picks up where the last one left off, after the extremely likable Poussey Washington (Samira Wiley) was accidentally killed by an untrained guard, and the flawed but essentially decent warden, Caputo (Nick Sandow), did not acknowledge the full extent of the tragedy. This enraged the inmates, and in the fracas that followed, Dayanara (Dascha Polanco) grabbed an officer’s gun.The new season takes place over the course of a few tension-filled days when the confrontation in the cafeteria turns into a full-fledged riot. It features the show’s trademark mixture of tense drama, comedy and social commentary. While the show started out four years ago focusing on Piper (Taylor Schilling), an educated woman doing time for a minor drug offense, it has evolved into a panorama of women’s stories. Some of the best moments are always the back stories of the inmates. Among these this season is Frieda (Dale Soules), who had a semi-psychotic survivalist father and has set up a bunker filled with goodies in a hidden corner of the prison.The breakout star this season is Danielle Brooks, who plays Taystee, the character who is instrumental in galvanizing the others into turning the riot from an opportunity to blow off steam and humiliate the guards into a way to make meaningful changes in the prison conditions. While this series has some serious criticism of for-profit prisons, it never strays far from the sophisticated humor that has made it so much fun. It’s hilarious and heartbreaking at the same time. Television doesn’t get better than this.

It’s All One Big Show:
“I’ve been smokin’ for 75 years, every f**kin’ day,” says Carl, who is played by Harry Dean Stanton, the dean of American character actors, on the most recent episode of Twin Peaks.One look at the 90-year-old Stanton, and you believe every word. Stanton is best known to television viewers as Roman Grant, the corrupt “prophet” in Big Love.The slight, grizzled Stanton made Grant totally credible — and fascinating. Sadly, he is just in the one episode of the new Twin Peaks, but it is memorable.

Twin Peaks airs on YES Oh on Mondays at 5 a.m. and 10 p.m. and on YES VOD.Star, a show about a mixed-race girl singing group, is the latest series from Lee Daniels. He is the creator of Empire, the impossibly fun series about a hip-hop dynasty. But he also made the heavy-handed movie about a victimized girl in the ghetto, Precious, which was billed as “Precious, based on the novel Push by Sapphire,” and spoofed on 30 Rock as “Hard to Watch, based on the novel Stone Cold Bummer by Manipulate.”The series, which will start airing on June 18 on YES Drama at 9:15 p.m. and on YES VOD, is more in Daniels’s Precious mode. It’s about Star (Jude Demorest), a teen with a record for petty crime who has been in the foster-care system since the death of her mother, a singer. Star is a great singer and starts collaborating on songs with a rich girl, Alexandra (Ryan Destiny), via the Internet. Star discovers that her mother’s musical partner (Queen Latifah) has been offering to adopt her and her sister, Simone (Brittany O’Grady), for years. The sisters, along with Alexandra, form a singing group that catches the interest of a down-on-his luck musical producer (Benjamin Bratt, best known for Law & Order).The problem is that the characters are cliches, and the girl group is cute but bland. This is strictly for those who are addicted to the subgenre of entertainment based on the stories of Motown, which includes the vastly more entertaining movies Sparkle (both versions), Dreamgirls and The Sapphires.
Advertisement
Subscribe for our daily newsletter