In 'Maggie's Plan,' Julianne Moore manages to steal every scene she’s in. 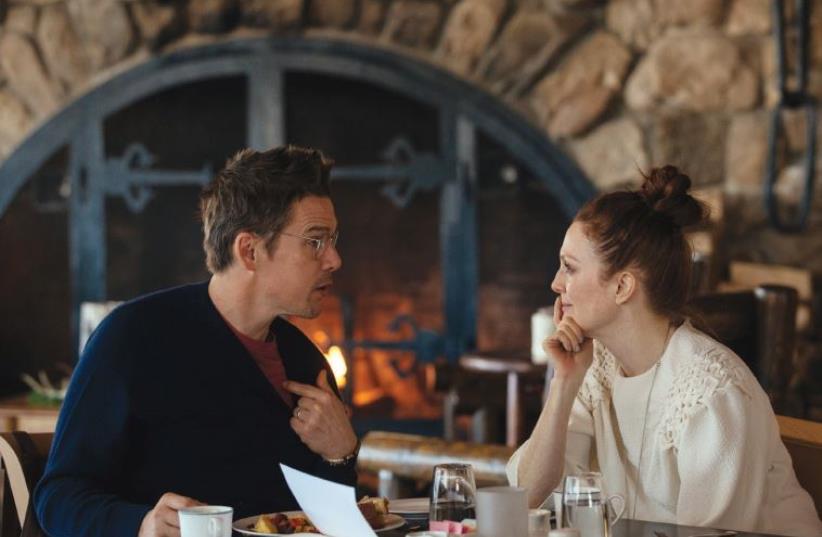 ETHAN HAWKE and Julianne Moore star in Rebecca Miller's 'Maggie’s Plan'
(photo credit: JON PACK / HALL MONITOR INC)
Advertisement
Maude Lebowski is back, and she’s at the Berlinale.Maude, if you recall, was the glacial, ultra-pretentious artist in the Coen brothers’ The Big Lebowski, and she was played to perfection by Julianne Moore. Moore went on to have a stellar career as a leading lady in serious movies, such as last year’s Still Alice, for which she won a Best Actress Oscar, but she never had a part as funny as Maude again.Until now.Maude is present, in spirit at least, in Rebecca Miller’s new comedy, Maggie’s Plan, which was shown in the Panorama section, and features a character played by Moore called Georgette. Georgette is a Norwegian anthropologist who is a star in the field of “ficto-critical studies,” and has an accent that recalls Maude’s bizarre speaking voice. Georgette is so demanding that her husband, John (Ethan Hawke), puts his life on hold to care for her. It’s easy for him to fall for the younger, more thoughtful Maggie (Greta Gerwig), who is planning to have a baby on her own.It’s an enjoyable movie with a great cast, which includes Bill Hader and Maya Rudolph, but Moore manages to steal every scene she’s in.She appeared alongside Miller (who is the daughter of playwright Arthur Miller and who is married to actor Daniel Day-Lewis) and Gerwig at the press conference following the movie, one of the few purely comic offerings at the festival.Moore, in a black, lacy cocktail dress, looking as gorgeous in person as she does in photos, said of her role as Georgette, “I loved her on the page and I loved how Rebecca and I were able to create her together” during the filming. Moore appeared in one of Miller’s earlier films, The Private Lives of Pippa Lee, in 2009.Maggie’s Plan is one of several high-profile movies at the festival directed by women, in a year when there has been a lot of talk about the lack of women behind the camera.In a master class, festival jury president Meryl Streep talked about the screenwriting workshop she founded for women over 40 and said, as reported by Thelma Adams of VanityFair.com, “It’s very difficult to get that boardroom of 40- to 50-year-old white males to be interested in the stories of their first wife or their mother.”Only two of the films in this year’s main competition were directed by women, Mia Hansen-Love’s L’Avenir, starring Isabelle Huppert as a teacher whose husband leaves her, and Anne Zohra Berrached’s 24 Weeks. 24 Weeks, the story of a standup comedian who learns that her unborn child will have multiple birth defects, might seem like an unpromising subject for a movie, but it makes a very strong impact. It will not surprise anyone if Streep and her jury choose to give some of the top prizes to this very moving film, that focuses on a dilemma so many families face but few people talk about.