Wovenhand’s sermon of clamor and sin

It felt as if the pits of the Netherworld had opened up, and upwards soured sinful souls to the command of the powerful voice of David Eugene Edwards. 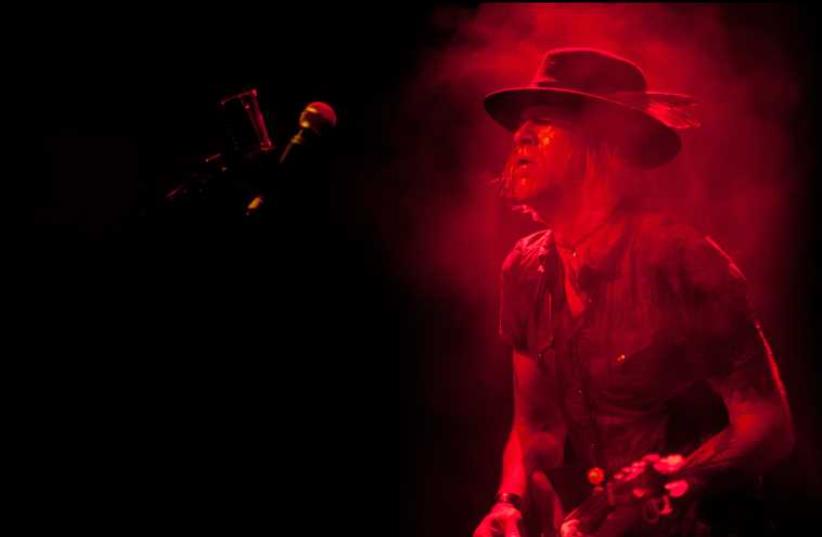 Wovenhand performs in Israel
(photo credit: LIOR KETER)
Advertisement
When Wovenhand began to play at the Barby Thursday night, it felt as if the pits of the Netherworld had opened up, and upwards soured sinful souls to the command of the powerful voice of David Eugene Edwards.The heavy distorted guitar riffs, the huge echoing effect on Edwards’s baritone vocals and the repetitive clamor of the drums (and guitarist’s darbuka) interweaved into what deemed as a spiritual music sermon of trance, intensity and barbarism.You can either love it or loath it.Considerably, Wovenhand’s music is not easily accessible and the Israeli crowd did not show up in droves like in other recent international shows at the Barby. Yet still there was an audience of approximately four to five hundred people who came to support and clap enthusiastically between numbers (one of Edwards’s few spoken sentences was: “Thank you for clapping” – perhaps Israelis clap more appreciably than Europeans).Even though the music of Edwards – either from 16 Horsepower or Wovenhand records – also draws its influences from American old time music, alternative-country and folk rock, the night’s set was nothing short of an orgy powerhouse of post-punk, industrial-metallic songs from start to finish.Edwards’s persona on stage is intriguing. He moves purposefully, acutely and with the intensity of a man possessed by a demon. Occasionally stretching his eye wide open with his left hand, or drawing his head backwards, pulling his hand ferociously up in the air as if to help this awkward movement. His body language literally expresses itself as if fixated while simultaneously transfigured by the dark magic of the music – tightly created by the four-piece band members on stage.The religiosity element in Wovenhand’s music did not go amiss in the ancient land of milk and honey. Opening number In The Temple, others like Masonic Youth, King O King, King David and closing number Good Shepherd (last of three encores), fitted handedly to the occasion.It was the second visit to Israel by the band after a five year hiatus; and if we heed to Edwards’s philosophy, the occurrence of the third show will not be in the hands of his or ours, but in the hands of the shepherd above.