The Tax Authority added that the rings were shipped from Turkey, and have been categorized as constituting illegal propaganda, and hence, banned for import. 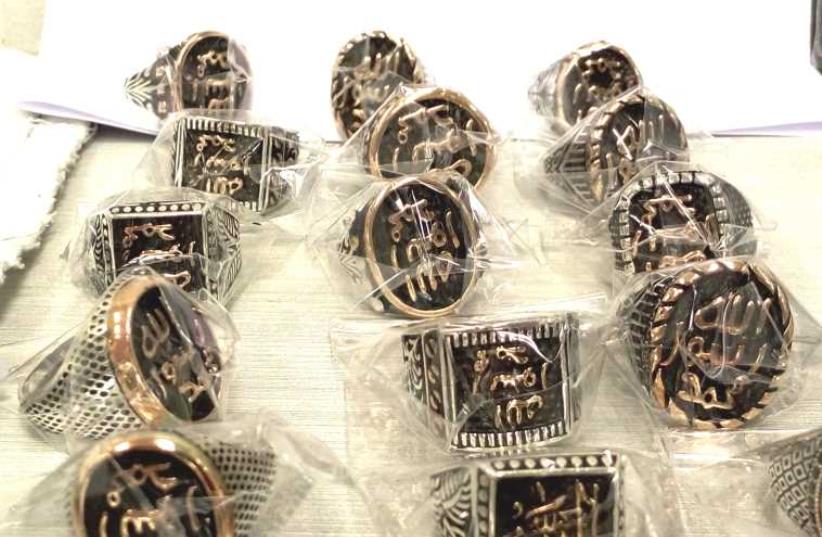 ISIS rings seized by customs at airport
(photo credit: BEN GURION AIRPORT CUSTOMS)
Advertisement
Customs officials at Ben-Gurion Airport made an unusual seizure on Tuesday after discovering 120 rings carrying Islamic State emblems and texts.The package was on its way to an importer in Ramallah, and contained hundreds of other items of jewelry, the Customs Directorate said.The Tax Authority added that the rings were shipped from Turkey, and have been categorized as constituting illegal propaganda, and hence, banned for import.Security forces have been notified.The seizure comes one day after customs officers and the Shin Bet (Israel Security Agency) announced the interception of 40 diving suits on their way to the Gaza Strip.The shipment was impounded at the Nitzana customs terminal, on the border with Egypt, at beginning of the month, authorities said, adding that it was the latest in a series of attempts to smuggle weapons and equipment to the Gaza Strip.Import documents claimed that the suspicious package contained sports suits, but a check by Nitzana customs employees found 40 diving suits inside, which require a special license for import to the Strip.Security sources believe the package was part of Hamas’s efforts to build up its offensive military capabilities, in particular its naval strike force, which includes commando units tasked with attacking Israeli targets.