Dagan was ‘top expert on Iran, led many daring operations’

Dagan took into account both strategic-operational considerations, and the larger international relations arena, enabling him to express himself openly. 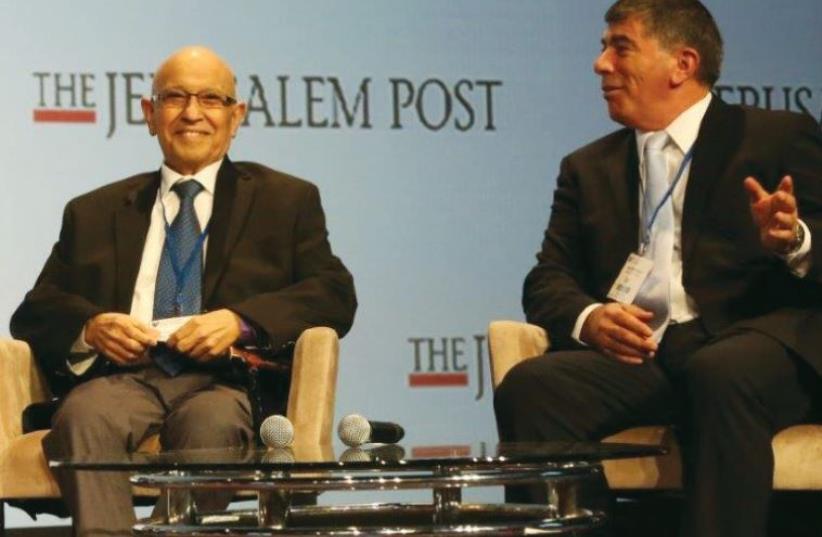 FORMER IDF chief of staff Gabi Ashkenazi gestures beside former Mossad chief Meir Dagan at 'The Jerusalem Post' Conference in New York.
(photo credit: SIVAN FARAG)
Advertisement
Former Mossad chief Meir Dagan, who died on Thursday, was Israel’s No. 1 authority on Iran, and led many “daring operations” that later enabled him to speak freely about how to deal with Tehran’s nuclear program, Efraim Halevy, his immediate predecessor as director of the intelligence agency, told The Jerusalem Post on Thursday.Halevy, who led the Mossad from 1998 to 2002, said that Dagan’s strategic thinking concerning Iran was “incredibly important,” adding that very shortly before the West began negotiation with Tehran began over its nuclear program, Dagan had completed a lengthy term (2002–2011) as head of the agency.“He was probably one of the most up-to-date experts on the issue. He could speak openly because he was no longer in office, and could express his view based on his many activities,” Halevy said.Dagan took into account both strategic-operational considerations, and the larger international relations arena, enabling him to express himself openly, according to Halevy.“What he said was that the Iranians are a very real threat to Israel, but that so much has been done to contain that threat, that he believed the right thing to do was not to up the ante for those who were beating the drums of war, but to extract from the situation a deal, on the basis of Iran reaching a point where it was vulnerable,” he said.“And therefore, those who confronted Iran were able to negotiable out of a position of strength, not weakness.His main message was that Israel is very strong, and has a variety of capabilities that are very clear today,” Halevy said. “He did not think that Israel was acting out of a position of weakness, but rather, strength.”Dagan’s resistance to the idea of unilateral Israeli military action targeting the Iranian nuclear program, as the government reportedly weighed some five years ago, was representative of the mainstream defense establishment view at the time, though he “needed a lot of stamina, courage, and determination to confront the political level,” Halevy said.Dagan’s distinguished military record, and the fact that he had seen death so many times on the battlefield, meant his views carried much weight, according to Halevy.He did not see the Iran nuclear deal with the P5+1 powers as “an abject failure,” Halevy added.Although Dagan would have preferred much harsher terms for Iran, he recognized “distinct achievements in the deal, and was certainly of the opinion that the US and P5+1 in general had acted in good faith, and that it was important to keep alongside them.” Lt.-Col. (res.) Ron Tira, a reservist at the Israel Air Force’s Campaign Planning Department, who served as a section head in the IAF Intelligence Division, offered a more critical view.“The view that opposed striking the nuclear sites [in Iran], which was led by Dagan, stemmed from looking at the physical results of the attack, and from a certain overstated assessment of the possible Iranian retaliation,” Tira told the Post.Tira, a former fighter pilot with more than 30 years of military experience, said that a “more fitting view would have been to focus on the strategic dynamics that enabled Iran to reach the nuclear threshold.”These dynamics included Tehran’s strategy of slowly advancing its nuclear program, but with significant redundancies, and its success in creating deterrence that surpassed its real military capabilities, as well as the US’s reluctance to enter into a third war in the Middle East (after Iraq and Afghanistan), and Israel’s reluctance to enter into a military confrontation with Iran, or a diplomatic confrontation with the US, Tira said.“The aim of an attack would not have been to destroy nuclear facilities, which could indeed be rebuilt, but to change the strategic dynamics,” he argued. “Dagan’s opposition to the attack was one of the elements that led Iran to its current situation, in which it has, in effect, established itself as a nuclear threshold state.“Today, the nuclear options are in Iran’s hands. It can choose between breaking through out to nuclear weapons, chipping away at the nuclear agreement, or waiting for the agreement to expire,” Tira said.Yoel Guzansky, a research fellow at the Institute for National Security Studies in Tel Aviv, formerly coordinated work on the Iranian nuclear challenge at the Prime Minister’s Office.Guzansky recalled that Dagan asked then-prime minister Ariel Sharon for permission to lead the Israeli campaign to thwart the Islamic Republic’s nuclear program, and received it.“He [Dagan] built operational capabilities and took brave decisions on this issue.Many achievements in this area are his,” Guzansky said.“There are some who say that the operations he pushed for, as part of Israeli policy on the issue, generated pressure on the international community, and created urgency [around the Iranian nuclear issue].”