The Israeli envoy, however, did not deny that Israel used every diplomatic tool available to convince their diplomatic partners that the Resolution 2334 was "shameful." 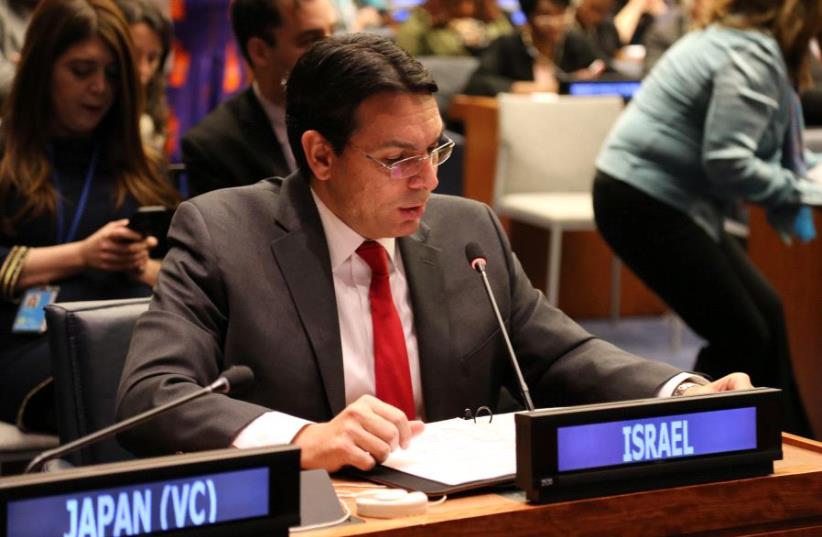 Ambassador Danon addressing the UN after the Israeli resolution was adopted.
(photo credit: COURTESY OF THE ISRAELI MISSION AT UN)
Advertisement
NEW YORK - Ambassador to the UN Danny Danon denied that he had prior knowledge of an alleged coordination effort to scuttle a controversial United Nations resolution between Trump transition officials and the Israeli government.United Nations Security Council Resolution 2334 was passed on December 23, 2016 in a 14-0 vote with the United States abstaining. The resolution condemns Israeli settlement activity in East Jerusalem and the West Bank and calls Israel’s presence in the Old City a violation of international law.In December 2017, US Special Prosecutor Robert Mueller’s investigation into the 2016 presidential election revealed that former National Security Adviser Michael Flynn was directed by a “very senior member of the [Trump] transition team… to contact foreign governments, including Russia, to learn where each government stood on UN Resolution 2334 and to influence those governments to delay the vote or defeat the resolution.”Buzzfeed News later reported that the Trump transition team undertook the effort to “undermine the Obama administration’s policy on the Middle East… at the prodding of Israeli officials” in the Netanyahu government.But in an interview with The Jerusalem Post on Thursday, Danon said he was not aware of an alleged clandestine arrangement between the incoming US administration and Jerusalem to sink the UNSC vote, explaining that he didn’t know what “others may have done” during that time.“I can tell you about myself: I made phone calls to heads of state I have personal relationships with; I made phone calls to ambassadors here [at the UN] and the same with [Prime Minister Benjamin Netanyahu],” Danon said.The Israeli envoy, however, did not deny that Israel used every diplomatic tool available to convince its diplomatic partners that the resolution presented in the last days of Barack Obama’s presidency was “shameful” and unhelpful in peace negotiations.  The ambassador explained that the Israeli government found the resolution objectionable on two fronts: primarily on its contents and how it was presented to the UNSC.“I can tell you what our attitude was… we spoke everyone and everywhere we could about this resolution,” said Danon.“We thought it was a mistake, we thought it was a shameful resolution. I think the fact that it was brought before [the UNSC] in the last days of the previous administration showed it was something that people worked on... with insufficient time and we were disappointed.”“Not only because of the content of the resolution,” Danon continued, “which if you remember, and I’ll quote... called Israel’s presence in the Old City a ‘flagrant violation of international law’ - that is something we cannot accept.”Danon also said that Jerusalem was disappointed in how the Obama administration communicated their rationale in the lead up to the UN vote, saying the Netanyahu government expected the White House to thoroughly explain their position before electing to abstain. “But this was not the case,” said Danon, adding that “it was done behind closed doors.”The Israeli envoy also revealed that at the time of the vote, senior officials representing governments from around the world confided that they disagreed with the resolution, but were compelled by the US to vote in favor of the initiative.“A few ambassadors came to me, I have friendships with those ambassadors... they came to me [and said]: ‘Danny, we have to apologize but we were asked by the US administration to support this resolution and we don’t want to support this resolution,’ and I believe them.”Asked whether he believed it would be inappropriate for a foreign government to work with the incoming Trump administration while one was already sitting in power in Washington, Danon said he would not “refer to the specifics” of the alleged incident, adding that “there were enough politics in Jerusalem.”“I am not knowledgeable what are the rules here in the US,” the ambassador quipped. “I don’t know what’s accepted or not accepted in American politics but I can tell you in terms of Israel, we spoke with whomever we could, and we explained to everyone why it is a bad resolution.”