Israel's envoy to the UN Danny Danon took counterparts on a tour of the capital to help them "understand the challenges facing Israel in today's tumultuous Middle East." 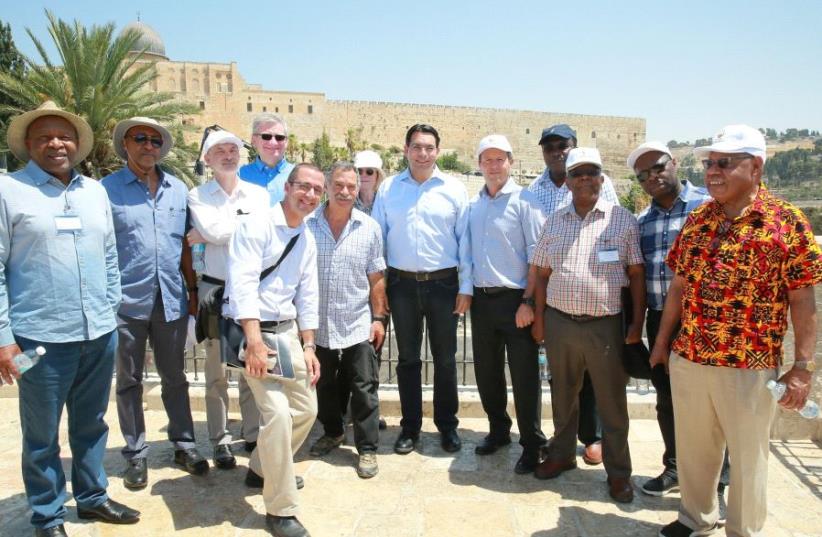 Israel's Ambassador to the UN Danny Danon guides counterparts through a tour of Jerusalem.
(photo credit: ARNON BOSSANI AND FRAYDA LEIBTAG)
Advertisement
NEW YORK – Ambassador to the UN Danny Danon led nine of his counterparts on a tour of Jerusalem’s City of David on Monday as part of a visit to Israel organized by the American Jewish Committee.Jerusalem Mayor Nir Barkat gave the diplomats a guided tour of the historic site, showing them the remains of the Shiloah Pool as well as numerous archeological findings, which, he said, unambiguously link the Jewish people to Jerusalem.“To defeat the lies spread about our capital city at the UN, nothing is more important than for my fellow ambassadors to learn the truth about Jerusalem and see the beauty of this city firsthand,” Danon said.The five-day visit aims to provide the ambassadors with a deeper understanding of the geopolitical and security challenges Israel faces. Participating in the tour are representatives of Australia, Estonia, Gabon, Kenya, Lesotho, Malawi, Papua New Guinea, Poland and Togo.In addition to their tour of Jerusalem, the diplomats will spend the next few days traveling from the northern border to the southern region, as well as to Tel Aviv.The trip also includes a meeting with Prime Minister Netanyahu and other government officials in Jerusalem, as well as visits to centers for innovation in agriculture and water technology.The delegation is also scheduled to travel to Ramallah, to meet with Palestinian Authority Prime Minister Rami Hamdallah. They will also tour the joint Israeli-Jordanian-Palestinian Industrial Zone.“Ambassadors to the UN are senior representatives of their governments and are at the forefront of their countries’ international relations efforts,” Danon said. “The more ambassadors that visit Israel and have the chance to visit all parts of our beautiful country, the more they understand the challenges, as well as the opportunities, facing Israel in today’s tumultuous Middle East.”AJC CEO David Harris, who is also taking part in the trip, said his organization is “honored to play a part in bringing this high-ranking delegation to Israel.“From considerable experience, observing Israel from a distance is no substitute for seeing it up close, which is the goal of this fiveday visit,” he added.