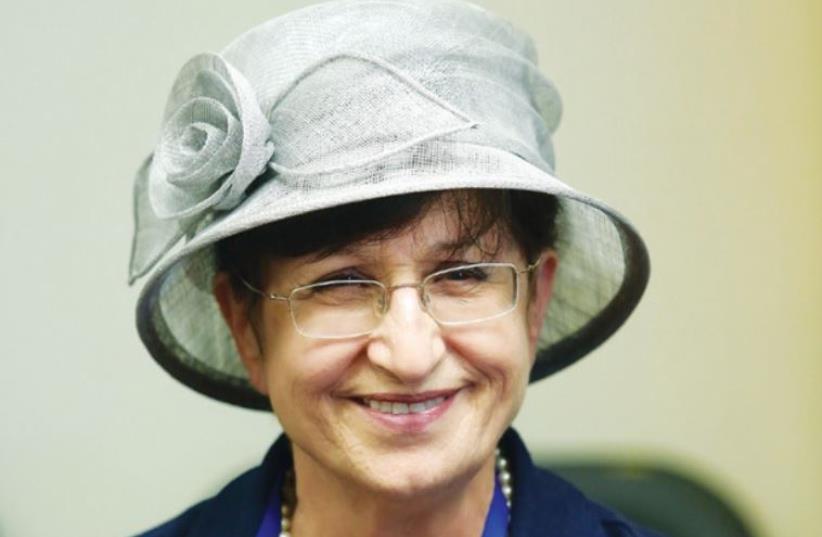 Adina Bar-Shalom
(photo credit: MARC ISRAEL SELLEM/THE JERUSALEM POST)
Advertisement
Adina Bar-Shalom, a pioneer of higher education for the haredi community, has formally registered a new political party with the Parties Registrar under the name “Ahi Yisraeli,” meaning “my Israeli brother.”The new party looks set to target a wide spectrum of voters and focus on social issues, including reducing wealth inequality, promoting societal coexistence and respect, advancing equality for women, including in the haredi (ultra-Orthodox) sector, and renewing a drive for a peace accord with the Palestinians.Bar-Shalom, 73, the daughter of the late revered haredi leader Rabbi Ovadia Yosef, has talked for some time of starting her own party and threatened to do so before the previous elections, but in the end settled in 2015 for heading a women’s council within the Shas party.There have been several attempts by other haredi women to enter politics on a local and national level, but all have failed to ultimately gain traction.Bar-Shalom’s new party – Ahi Yisraeli “The Connection is the Story,” to give it its full name – has not formally announced its launch but submitted registration forms to the Party Registrar within the Justice Ministry, which were received on July 24.Bar-Shalom is registered as the president of the party while Yerucham local council chairman Michael Biton, 48, is the party chairman.Ahi Yisraeli seems poised to appeal to a broad spectrum of voters, having stated in its registration forms that its goals are to find “the common good” and will be based on “moderation, mutual respect, and consensus.”The document adds that the party will seek to attract to its electoral list “people of action from different sides of Israeli society,” for a “joint political journey.”Among the political goals of Ahi Yisraeli are “equality of opportunity, reduction of [wealth] gaps in a dignified existence for every male and female citizen,” while education will be a key focus in obtaining these goals.Affirmative action plans for the country’s periphery in the Negev and the Galilee regions will also be advanced.The party says that it will “work to advance cooperative life in Israel as a Jewish, Zionist and democratic state, [and] to enable different communities to preserve their identities while recognizing the other, having mutual respect and adhering to ‘non-coercion.’” Ahi Yisraeli says that along with working to “fortify” Israel’s security, the party will work in a proactive and fresh manner to advance a peace agreement and “arrangements” to “end the conflict with our neighbors through an understanding of the need for compromises by both sides.”Bar-Shalom’s father famously ruled that under Jewish law it would be acceptable to give up parts of the Land of Israel in return for a peace accord with the Palestinians if it would stop bloodshed and save lives.