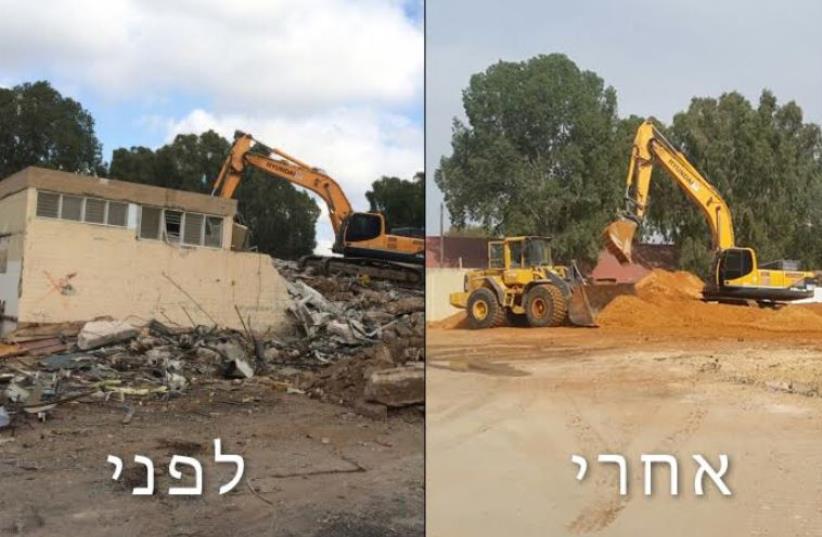 Before and after photo of Tzriffin base demolition
(photo credit: DEFENSE MINISTRY)
Advertisement
The Defense Ministry has cleared 10,000 sq.m. of the Tzrifin military complex near Rishon Lezion, it announced on Sunday, implementing the first phase of its historic decision to demolish the base and move its units to peripheral regions, making way for residential construction in central Israel.The ministry launched a tender for the clearing of 65,000 sq.m. – the second phase of the plan – and for the construction and development of 50,000 sq.m., it said.The ministry’s engineering and construction branch, which is overseeing the project, destroyed hundreds of structures in Tzrifin’s Site 4 area, including Training Base 10 that serves the Medical Corps, Training Base 6 serving the Logistics Corps, and Ground Forces unit buildings.“Site 4 is the first of six sites that the Defense Ministry will clear by the end of the decade as the IDF’s training bases move to the training campus under construction in the Negev,” the ministry said.When the second stage of the clearance program takes place, the Israel Lands Authority will begin marketing the area as residential real estate, where thousands of housing units will be built.Tzrifin was established during the British Mandate, when it was known as Sarafand.It contains military offices, soldiers’ barracks, kitchens, garages and factories, as well a network of roads, gates and fences.Several buildings with historical value will be left untouched, according to the ministry.Erez Cohen, head of the ministry’s engineering and construction branch, said in January that “the evacuation of Tzrifin Camp is one of the largest and most complex undertaken by the defense establishment in recent years. It includes the demolition of hundreds of structures while safeguarding historical buildings.”The IDF is planning a “training bases city” in the Negev, as well as two large military campuses for the C4I Corps, responsible for all areas of teleprocessing and communications, and the Intelligence Corps.When the relocation programs for all military sites in central Israel are complete, the Defense Ministry estimates that some 100,000 housing units and 2.5 million sq.m. of commercial or industrial buildings will be built on the newly available land.