The High Court has adjudicated land cases involving Sussiya for at least 16 years. 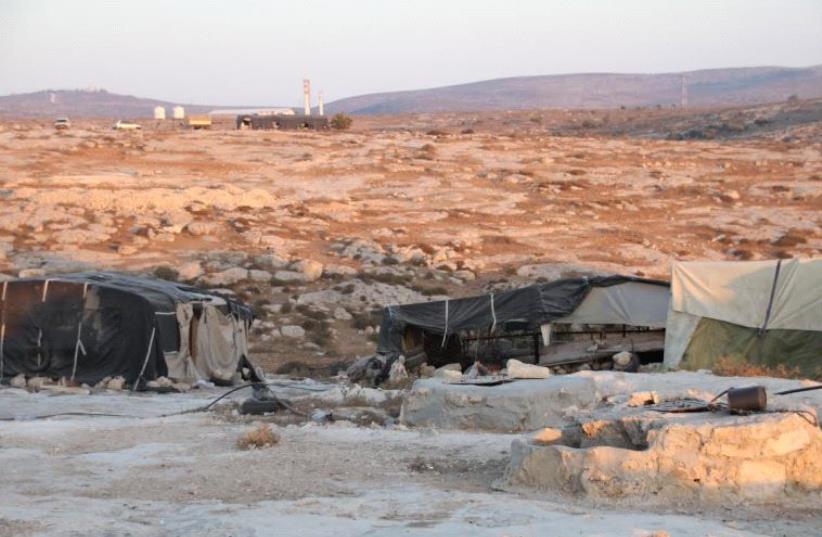 Sussiya
(photo credit: TOVAH LAZAROFF)
Advertisement
Residents of the illegal Palestinian herding village of Sussiya in the South Hebron Hills have been braced for almost a week for the IDF to demolish some three to seven modular structures.“The residents of the village live under threat of ‘demolition terrorism’ on a daily and immediate basis,” the village’s attorney, Quamar Mishirqi-Assad, told The Jerusalem Post on Wednesday.The High Court of Justice last Thursday lifted an injunction protecting a small number of structures in the village, a move that allows the Civil Administration of Judea and Samaria to take them down without any further notice to the residents.Right-wing NGO Regavim, which is part of the High Court of Justice case, said, “We fully expect the Civil Administration to do its job.”The court’s decision has caused a small outcry on Twitter, including from US college campus branches of the leftwing J Street NGO, which on Tuesday tweeted messages of support for Sussiya.After the High Court ruling, US Sen. Dianne Feinstein (D-California) tweeted, “It’s heartbreaking to hear that the Supreme Court of Israel approved the demolition of seven buildings in the Palestinian village of Sussiya, destroying the homes of 42 people, half of whom are children or ill.”The ruling marks a turnaround on the issue of Sussiya, because the question of the overall demolition of the village of some 100 structures that are home to 350 people, has been on hold since November.The question before the High Court at the moment continues to be the fate of some 15 to 36 structures, including the ones under imminent threat of demolition, which are believed to have been built from 2012 to 2014 in defiance of a court order.But the fate of Sussiya as a whole has been held up by a Defense Ministry and Civil Administration debate over whether a community in the West Bank must be composed of continuous property or can it be noncontiguous.The question has come up with regard to legalization of West Bank outposts but could also affect the decision-making with regard to effort by Palestinians to legalize Sussiya.Last week the High Court told the state that it must update the court by May 7 with regard to the question of authorizing Sussiya.The High Court has adjudicated land cases involving Sussiya for at least 16 years.The fate of the village has garnered increased international attention over the years.The Civil Administration wants to relocate the village close to the Palestinian city of Yatta and away from its current site near the archeological park and the Jewish settlement of Sussiya.Right-wing politicians have argued that the Sussiya residents already have homes in Yatta, and that their quest for legalization is part of a land grab by the Palestinian Authority to increase its holding in Area C of the West Bank.Separately on Monday, the Civil Administration confiscated a 400-meter water pipeline that had irrigated a watermelon patch belonging to a resident of Tubas, a Palestinian city in the northeastern West Bank, according to the leftwing group B’Tselem.It also confiscated four tents housing nine people in Khirbat Umm al-Jamal, in the northern Jordan Valley, B’Tselem said.