The Israel Police is shifting its focus in the case against Interior Minister Arye Deri from economic-related charges to ethics-related criminal offenses, Channel 2 News reported on Tuesday. 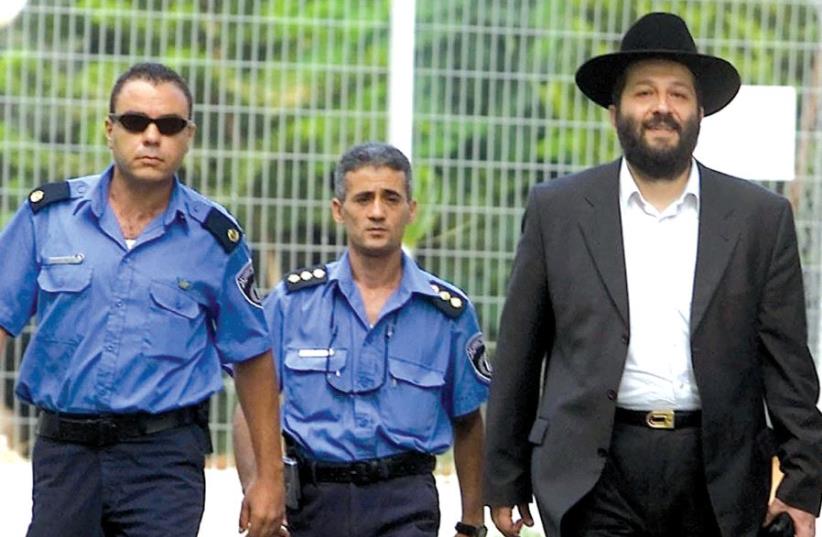 Aryeh Deri is escorted by policemen as he walks out of prison in 2002, after serving two years of a three-year sentence for corruption
(photo credit: REUTERS)
Advertisement
The Israel Police is shifting its focus in the case against Interior Minister Arye Deri from economic-related charges to ethics-related criminal offenses, Channel 2 News reported on Tuesday.“A large amount of money was drawn from Yaffa Deri’s non-profit organizations to relatives and associates. No one really knows where the money went and for what. But one thing is certain – a large amount of money was spent, not for the purposes that the NGOs were established for,” a senior law enforcement official was quoted as saying. “The main point [of the investigation] is now shifting toward ethical offenses. The suspicions are strong,” he said.Deri has already been questioned five times by the Lahav 433 National Fraud Unit in its criminal investigation. Until now, it had been reported that he was suspected of tax offenses, money laundering and breach of trust.The investigation is being conducted by the Israel Police, the Israel Tax Authority and the Israel Money Laundering and Terrorism Financing Prohibition Authority.During the investigation, Deri was reportedly questioned about three main issues. The first concerns suspicion of tax offenses, fraud and money laundering in a real estate deal in which Deri allocated a property in the Givat Shaul neighborhood of Jerusalem to his brother Shlomo, who is also expected to be indicted.The second pertains to allegations that the construction of a vacation home owned by the Deri family in Kfar Hoshen in the Upper Galilee Valley, also known as Safsufa, was financed with money that was not reported to the tax authorities.The third matter concerns the NGO Mifalot Simha, run by Deri’s wife, Yaffa. It is suspected that some of the organization’s money was not raised or used in accordance with tax regulations.After the last questioning session in September, Deri posted on Twitter: “I just finished my questioning. This time, too, I answered all of the questions in detail. With the help of God, everything is okay and will be okay. May the people of Israel have a great day.”
Last month, Israeli Public Broadcasting Corporation Kan reported that the police were leaning toward recommending that Attorney-General Avichai Mandelblit indict both Deris.That report said some of the offenses in which Deri was allegedly involved were committed during his time in office.
It remains unclear which of the issues will be included in the indictment, but the report indicated that law enforcement authorities were likely to accept the police’s recommendation.