The ambassador’s invite from the school’s Jewish and United Nations societies had been a subject of huge controversy among the university’s students and faculty. 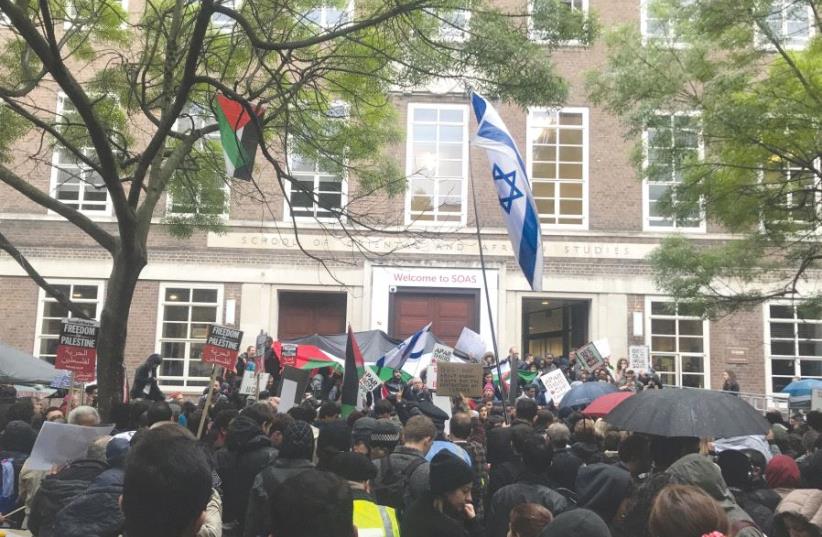 Protesters and counter-protesters gather outside London’s School of Oriental and African Studies
(photo credit: JOSH DELL)
Advertisement
LONDON – Amid relentless chants of “From the river to the sea, Palestine will be free” that could be heard from outside the venue, Israel’s Ambassador to the United Kingdom Mark Regev spoke at London’s School of Oriental and African Studies on Thursday night, taking part in a robust question-and-answer session.The event took place without impediment despite extensive protests. Renowned as one of the foremost hubs of student activism in the UK, Regev’s visit to the school was one of many that he has made to campuses across the United Kingdom since being appointed to the post in April 2016, as well as the first made by an Israeli dignitary to the university since 2005.After his appearance on campus, the ambassador tweeted: “Enjoyed an engaging discussion about Israel & Middle East with @SOAS students. Thanks to SOAS JSoc, Chair Prof @Eric Heinze & all who came.”An estimated 300 protesters were present on the campus Thursday evening, as part of an event coordinated by a group called Apartheid Off Campus. On their Facebook event page, the group described Regev as being “given the cover of an academic setting to put forward official state positions on the ongoing expansion of illegal settlements, the siege of Gaza, land thefts and discriminatory laws imposed on Palestinian citizens of Israel.”While the protest remained peaceful, tensions ran high at points, with an Israeli flag at one point defaced to appear as if it was covered with blood. Small leaflets were also distributed to those in attendance containing “some unofficial demo advice” that included the suggestion, “Don’t interact with Zionists.”Counter-protesting at the event was also a group called Censorship Off Campus, as well as around 50 pro-Israel supporters, who blasted Israeli music in attempt to drown out the sound of the speeches made by the protesters.The ambassador’s invite from the school’s Jewish and United Nations societies had been a subject of huge controversy among the university’s students and faculty, with a letter signed by more than 100 of the school’s academics protesting the ambassador’s appearance publicized in advance of the event. Previously in 2015, 73% of students, staff and outsourced staff voted in favor of supporting the BDS campaign in a referendum organized by the university’s student union.Voicing the concerns over what they viewed as the potential danger of having Regev on campus, they stated that they “fear that if this provocative event proceeds as planned, it will cause substantial distress and harm to many of our students and staff who are, have been or will be affected by the actions of what a recent UN report refers to as the Israeli ‘apartheid regime.’” In an interview with The Jerusalem Post conducted shortly before the ambassador’s appearance, the school’s Jewish Society president Avrahum Sanger said, “We must be able to engage in dialogue from all people from the regions [the university specializes in] as much as we dislike their policies, so it’s incredible that we’ve been able to get this event together despite the tensions of the staff, union and the societies within the university who [wanted] to stop this discussion.”Sanger added that despite numerous efforts, he had been unable to get a response from anybody in the Apartheid Off Campus team. Apartheid Off Campus was also unavailable for comment when contacted by the Post.With regard to the university’s stance on Thursday’s event, the school’s registrar, Paula Sanderson, said, “Our position has always been, and remains, that SOAS is a place which promotes freedom of debate and has a long tradition of hosting speakers from all over the world. We have not closed down or stopped events taking place due to the political view or beliefs of speakers.”