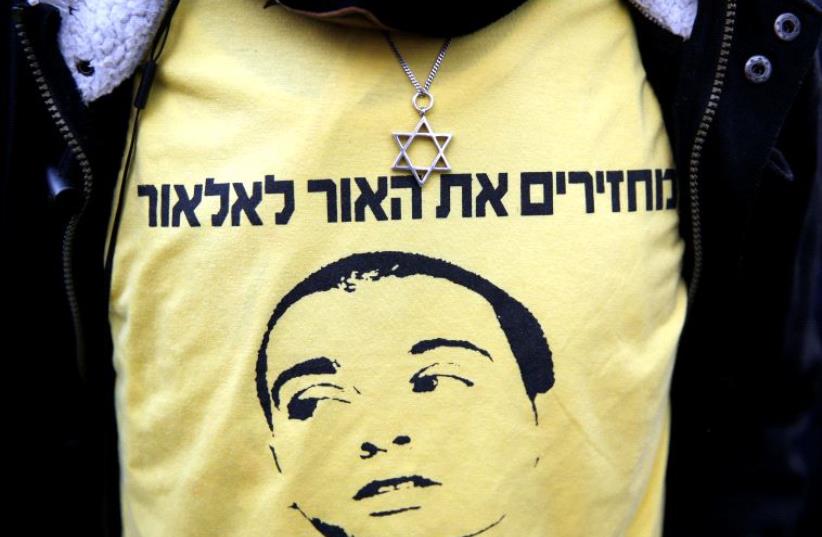 A supporter of Israeli soldier Elor Azaria, who is charged with manslaughter by the Israeli military, wears a shirt depicting Azaria with the words in Hebrew "Bringing the light back to Elor" during a protest outside the military court in Tel Aviv on the verdict day for the soldier, Tel Aviv, Israel
(photo credit: REUTERS)
Advertisement
One day after the IDF prosecution appealed to the Military Appeals Court to stiffen the manslaughter sentence of soldier Elor Azaria from 18 months in prison to between 36 and 60 months, his defense team produced an email that allegedly supports its claim that the IDF’s chief lawyer threatened such a move if Azaria appealed his conviction.The revelation came from an email on Monday, February 27, from former Azaria lawyer Eyal Besserglick, who resigned in protest at Azaria’s decision to appeal his conviction, addressed to Azaria’s remaining lawyer, Yoram Sheftel.In the email, Besserglick recounts that, the night before, he had met with Military Advocate-General Brig.- Gen. Sharon Afek, and that Afek had told him that if Azaria did not appeal his conviction, Afek would not seek to stiffen his sentence and would even be open to more speedily expunging his criminal record.Following the discussion, Besserglick and Azaria’s other former lawyer, Ilan Katz, quit the case, while Sheftel filed the appeal anyway to the Military Appeals Court, asking it to reject the prosecution’s appeal on the basis that the email proved that the IDF prosecution’s appeal had improper motivations.Azaria was sentenced in February for shooting Palestinian terrorist Abdel Fatah al-Sharif in the head on March 24, 2015, as he lay wounded on the ground, around 10 minutes after Sharif had been shot attacking two Israeli soldiers.In its appeal, the IDF prosecution declared that the 18-month jail sentence from the lower IDF trial court “was not commensurate with Azaria’s actions... and the grave circumstances of the incident, substantially departed from accepted punishment standards in being overly lenient... and did not send the IDF’s soldiers and the wider society the proper ethical message.”From the outset, the IDF prosecution noted that even the lower trial court had been divided, with two judges voting for the lighter sentence and one judge voting for a 30-to-60-month sentence.It cited the dissenting trial court judge who voted for a longer term, who wrote that the punishment given did not show sufficient respect for the sacredness of human life, “and that is even in regard to this [terrorist] who was a criminal and who did not engender too much sympathy.”Furthermore, the prosecution’s appeal argues that Azaria cannot seek too much leniency, considering that the lower court ruled that he had lied in his testimony.In fact, the IDF prosecution said that the leniency that the majority of the lower court showed to Azaria was completely contradictory to its harsh, one-sided findings against Azaria in its convicting him.Also, it said that its request for a longer sentence had already granted Azaria leniency in consideration of the special operational circumstances in which his killing of Sharif took place – without which it would have requested an even longer prison sentence.At a press conference last week after the defense filed its appeal, Azaria’s father, Charlie, said that the IDF was “trying to scare us, but we will not give up.”He was referring to the meeting last Sunday between Azaria’s former defense lawyer and Afek. The elder Azaria and Elor’s only remaining lawyer, Yoram Sheftel, already claimed at the time that Afek tried to intimidate the family and prevent the filing of an appeal, threatening that the IDF itself would file a counter-appeal seeking a stiffer sentence if the family appealed.The IDF at the time rejected this interpretation of the meeting, while refusing to discuss what actually transpired, even though in the end it did appeal’s lenient sentence.Katz and Besserglick also rejected Charlie Azaria and Sheftel’s claims. They said that they had opposed an appeal based on a realistic, professional legal assessment, weighing the potential costs and benefits.It is not unusual for the state or IDF prosecution to file a counter-appeal if a defendant appeals, and negotiations over such scenarios are commonplace, with prosecutors justifying them on the grounds that they believe they would win on appeal, and may decline to appeal only out of mercy and to save additional litigation time and energy.Azaria’s appeal seemed focused on overturning the lower IDF trial court’s decision that Azaria had essentially incriminated himself by confessing to two different IDF personnel that he had killed Palestinian terrorist Sharif out of revenge for Sharif stabbing his friend 10 minutes earlier.Azaria’s case has split the country, with most politicians calling for him to be pardoned, but he cannot seek a pardon until he exhausts his rights to appeal, starting with the IDF Appeals Court and possibly going up to the Supreme Court.