Wife of French ambassador in Senegal tells Israeli ambassador's wife not to attend event for wives of diplomats. 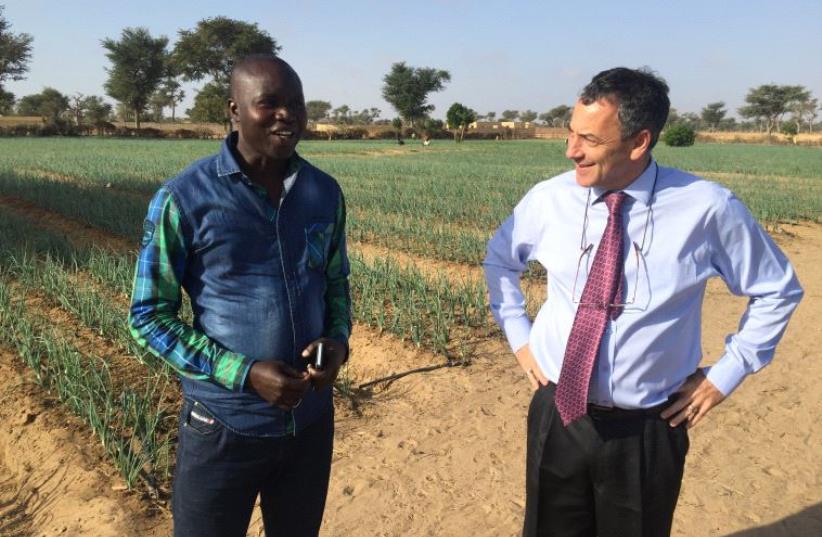 Ambassador Paul Hirschson at a small farm project supported by Israel in Senegal in March
(photo credit: SETH J. FRANTZMAN)
Advertisement
Jeanne Hirschson, wife of Israel's Ambassador to Senegal Paul Hirschson, was asked by the wife of the French ambassador in Senegal not to attend a meeting for diplomatic spouses, Ynet reported on Tuesday. The club of diplomatic spouses includes women and men who are married to diplomats now serving in Senegal, and is led by Marieme Faye Sall, wife of Senegalese President Macky Sall.Up until a month ago, Miss Hirschson was so active in the club of diplomatic spouses she served as the vice president of the club. In protest against her work in the club, Arab spouses quit, and the membership dropped to half of what it used to be.

Doesn't surprise or even bother that spouses of some Arab ambassadors to Senegal, who don't (yet) have diplomatic relations with Israel, object to the spouse of the Israeli ambassador being at diplomatic spouses' events. https://t.co/WKNBBM4olN

Two weeks ago, the wife of the French ambassador in Senegal held a social event for the diplomatic spouses in her home and called the Israeli spouse to ask her not to come, as she said it might upset some of the other guests if an Israeli were present.

In a series of tweets, Israeli ambassador to Senegal Paul Hirchson made the affair public and lauded Marieme Faye Sall, the Senegalese first lady, for supporting his wife in the matter and objecting to removing her from the club.

To her credit the 1st Lady of #Senegal objected to previous attempts to exclude @Israel from events of the Diplomatic Spouses' Organization. #kebetu https://t.co/WKNBBM4olN