For next week’s game to even mean anything for Jerusalem, it will first have to overcome AEK Athens on Wednesday. 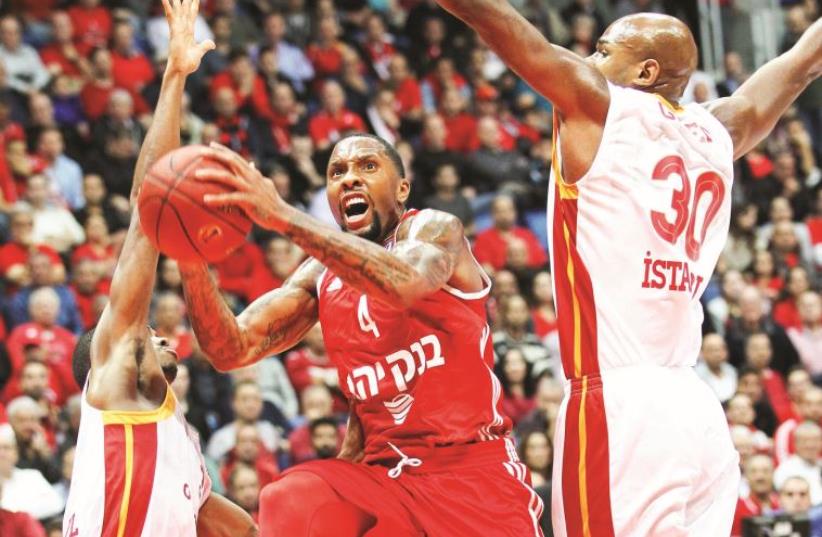 Jerusalem’s E.J. Rowland
(photo credit: DANNY MARON)
Advertisement
Anything but a win over AEK Athens at the Jerusalem Arena on Wednesday night and Hapoel Jerusalem will be knocked out in the Eurocup regular season for a second straight year.Jerusalem, which improved to 3-5 with last week’s impressive win over Galatasaray, has to beat AEK (4-4) before visiting rock-bottom Krasny Oktyabr Volgograd (1-7) in its final Group F game in Russia next week to have any chance of finishing in the top four and reaching the Last 32.However, even two victories from its final two games may not be enough for Jerusalem, with defeats for Nizhny Novgorod in its last two contests combined with an AEK win over Neptunas next week to leave Hapoel in fifth place due to its inferior head-to-head record against those teams.But for next week’s game to even mean anything for Jerusalem, it will first have to overcome AEK on Wednesday.Hapoel will be coming up against the Eurocup’s scoring leader, Loukas Mavrokefalidis (25.0 ppg), who was limited to 13 points in his team’s 75-74 win over Hapoel in Greece earlier this season.Hapoel looks to be entering Wednesday’s showdown in promising form after thrashing Maccabi Kiryat Gat 112-77 in BSL action at the Jerusalem Arena on Sunday, allowing coach Danny Franco to rest his starters.“There is no need to say much to the players ahead of the game with AEK,” said Franco. “We simply need to come out and play hard and aggressive basketball.”Franco will be counting on another strong showing by guard E.J. Rowland, who has been superb in his first season with the club, averaging 17.3 points, 5.8 assists and 3.4 rebounds in the Eurocup.Rowland had arguably his best game for the team in last week’s win over Galatasaray, finishing with 21 points, including crucial points in the final minute.Rowland’s drive to the basket gave Hapoel an 83-80 lead with 29 seconds to play and he secured the victory from the free-throw line.“We still have a lot of potential and I think this is just the beginning,” said Rowland. “There are small things that take you from a decent team to a good team and from a good team to a great team and we need to fine tune those things. If we do that we may be able to show that we can be good in Europe.”Rowland has quickly become one of the team’s leaders.“I want the respect of the team and the coach to believe that I want to do what is right for the team to win,” he explained.“I have been doing that for a long time and I’m not afraid of those moments I want to be that guy.”