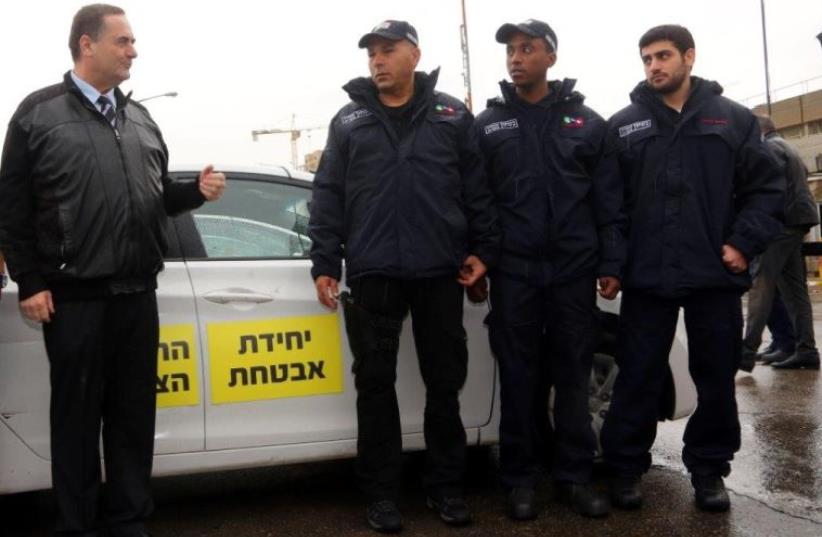 Transportation Minister Israel Katz launches a civilian security unit in Jerusalem
(photo credit: SASSON TIRAM)
Advertisement
When the head of Ma’aleh Adumim’s security killed himself with his pistol last Thursday – hours following his son’s suicide immediately after procuring a gun license to work as a security guard himself – concerns emerged about the efficacy of the country’s reputedly stringent gun policies.Last October, the Ministry of Public Security eased restrictions on gun permits when terrorist attacks spiked across the country.“In recent weeks, many citizens have helped the Israel Police subdue terrorists,” Minister of Public Security Gilad Erdan said at the time. “Citizens trained to use weapons are a multiplying force in our battle against terrorism. Therefore, I have worked to ease conditions for obtaining firearms.”However, one former security guard, who took the ministry’s standardized series of psychological tests for a gun license last September, claimed that emotionally disturbed candidates can “easily” pass the exam if they familiarize themselves with the most acceptable answers.“You have to answer 500 yes or no questions – with some answers rated on a scale of 1 to 5, depending on severity – on a computerized psychological evaluation,” he said on Sunday. “It’s the same test that taxi drivers take to get a drivers’ license.”The former guard, who requested anonymity, said sample questions included: “Are you sad most of the time?,” “Are you having trouble sleeping?,” “Do you love your family,?” “Do you love your friends?,” “Are you having trouble eating?,” and “Do you feel depressed most of the time?” “It’s a valid test, but they don’t ask any penetrating questions, and it’s easy to give the ‘right answer,’” he said, noting that he was never asked any telling questions such as “Do you want to harm yourself or others?” The computerized exam is timed, taking between one and three hours to complete. “If you come psychologically prepared, and know what to expect, you will get a normal score,” he said.Immediately after passing the exam, he said, applicants are sent to meet with a psychologist for no more than five minutes for a final evaluation.“That’s the real problem,” he said.“She sat with me for less than five minutes and asked some shallow and superficial questions that didn’t seem to have a relationship to your psychological state. For example, she asked: ‘Do you have something in your life that you regret?,’ and I said ‘Yes, sure, everyone does.’ Then she asked if I cared to elaborate, and I told her ‘No, I’d prefer to keep it to myself,’ and she said ‘alright, thank you,’ and that was it. I passed.“Other questions included: ‘How would you describe yourself in general?’ Just very vague and weird. After that you can go to the office and get a 9mm. gun and two magazines in like 10 minutes.”He said that he was allowed to maintain possession of the firearm 24 hours a day from that point on.Based on his experiences, the former guard said he was not surprised that Ron Ben-Hur, 31, took his own life with the pistol issued by the ministry shortly after getting his license – on the same day he was supposed to start training.“It’s pretty obvious that he had intent to kill himself, because on the same day that he got the gun he killed himself,” he said.“He obviously thought, ‘I need a gun to kill myself. How can I get a gun? I’ll work at a security agency and they’ll probably give me a gun, and then I can do whatever I want.’” In addition to the two psychological evaluations, he said all applicants are required to take nine hours of firearm training, where a gun is provided by instructors employed by the ministry.“The official name is ‘nine-hour training,’ but it’s actually it’s just two hours of training that’s stretched for nine hours,” he explained.“You take lunch and two hour breaks in the middle. The people who give the training have no psychological experience to know who may not be right in their mind. They just give general instructions about how to use the gun; they don’t view you through a psychological perspective.”He said that while security guards have to undergo more extensive training than civilians, it is more difficult for a regular citizen to get a license.“There’s more of a bureaucratic procedure for them than for security guards,” he said. “For example, civilians have to answer more questions and give the ministry a receipt proving he bought the gun with his own money and with his ID. Security guards don’t.”While conceding that last week’s double suicide was tragic, an official from the Ministry of Public Security, who requested anonymity, described it as an anomaly, and stood by the present psychological licensing requirements for both security guards and civilians.“This was an unusual case,” the official said, adding the matter is being investigated.He would not confirm if stricter guidelines will be imposed.