"If our freedom is taken bit by bit, there’s no chance our children will want to live here," says demonstrator. 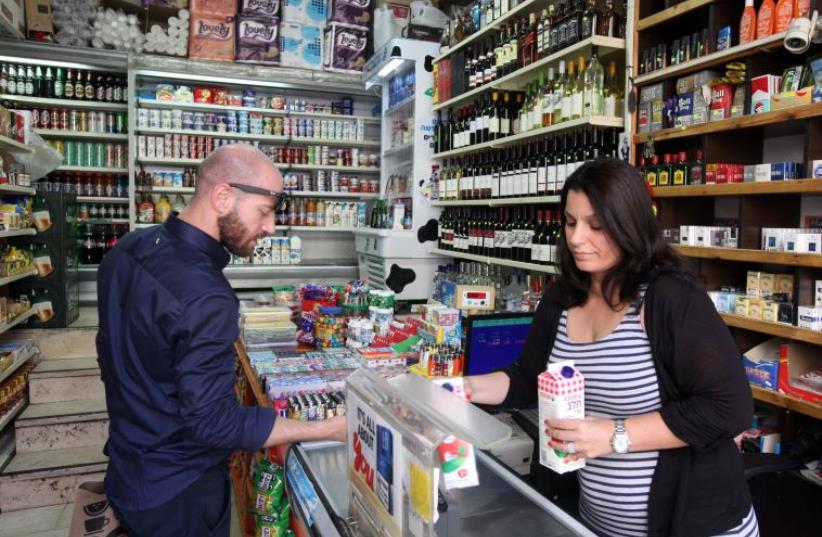 A convenience store in Jerusalem that is open on Shabbat
(photo credit: MARC ISRAEL SELLEM/THE JERUSALEM POST)
Advertisement
Dozens of protesters gathered in Jerusalem’s Safra Square on Thursday evening to condemn Mayor Nir Barkat’s decision to close eight of the capital’s downtown, 24-hour minimarkets during Shabbat.Yonotan Toker, chairman of the pluralistic Hitorerut Party – which is part of Barkat’s municipal coalition – said the measure is an affront to both religious freedom and basic human rights.“This is us claiming the most basic rights as human beings, and it’s just absurd that we have to claim them from the mayor of Jerusalem,” he said. “It’s not possible that Israel will remain the only westernized country that doesn’t have freedom of religion.”By alienating secular citizens, Toker said the city will only become increasingly fragmented and weakened.“If we want Jerusalem to be a city for all people – for the secular, religious, and ultra-religious – we need to understand where one person ends, another begins,” he said. “And we need to respect not just the boundaries so we can live near each other, but live with one another.”Moreover, Toker said that the closures will lead to a mass exodus of the same young residents Barkat has repeatedly said he hopes to attract and keep in the city.“If our freedom is taken bit by bit, there’s no chance our children will want to live here,” he said. “So, if Barkat won’t help do this, we will.”Orthodox city councilman Rabbi Aaron Leibovitz (Yerushalmim), who is also in Barkat’s coalition, lamented that the mayor is increasingly estranging the capital’s already dwindling secular community.“The city of Jerusalem is a city with all sorts of Jews, and it’s crucial that all sorts of Jews be here,” he said. “I’m an Orthodox rabbi, but I want my non-Orthodox and secular friends to live in this city, and the idea of closing all the convenience stores in the center of town and creating a degradation in the quality of life for people who don’t keep Shabbat… absolutely sends the wrong message.”In terms of keeping young residents in the city, Leibovitz said the mayor is “shooting himself in the foot,” adding that the capital’s large and influential haredi community must learn to compromise.“My message to my haredi partners on the city council is that it’s not a zero sum game,” he said. “If we disenfranchise the secular community from Jerusalem, we all lose.”According to Ron Ben David, who manages his father’s market, Supermarket 24/7 on Heleni Hamalka Street, Barkat’s edict will cost the business at least 50 percent of its total profits, resulting in imminent bankruptcy.“I’m here to tell the mayor that he cannot do such a thing,” he said. “It’s dictatorial. If we are not open on Shabbat than we cannot be open at all, because we cannot pay the bills without Shabbat.Shabbat is the biggest profit of the week.”While Ben David noted that his father has retained a lawyer to challenge the measure, he said that little can be done before September 5, when the closures will be enforced with prohibitive fines against store’s that continue to operate.Asked what he would say to Barkat if given the chance, Ben David replied: “You have no idea how much damage you are doing to the citizens, to the store owners, and you have no idea how much damage you are doing to the basic rights of people in Israel.”Meanwhile, Zach Barnea, 40, a secular father who frequently relies on downtown minimarkets to buy necessities for his young children during Shabbat, said the decision will unnecessarily complicate his family’s personal affairs.“As a citizen of Jerusalem, I think it’s very bad to close all the minimarkets on Saturday,” he said. “We are not religious and we want to also buy things on Shabbat for the kids, because if you need something you can’t go to Tel Aviv.”As a result of City Hall’s increasingly Draconian religious stance, Barnea said he now frequently contemplates moving his family out of the capital.“It’s becoming a hard place to live,” he said. “The mayor needs to give us a reason to stay here.”