Despite the lack of signs of life and rising death toll, rescue workers continued digging frantically on Tuesday evening. 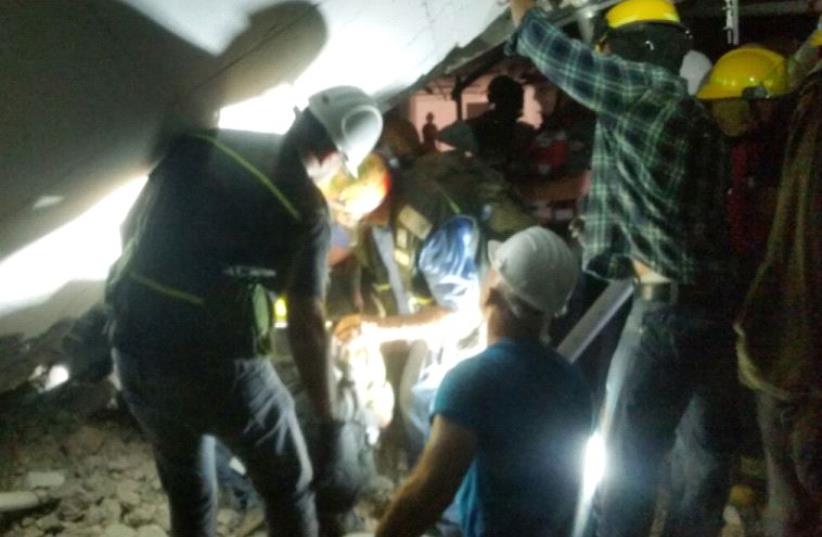 Scene of building collapse in Tel Aviv's Ramat Hachayal neigbourhood.
(photo credit: UNITED HATZALAH‏)
Advertisement
Despite the lack of signs of life and rising death toll, rescue workers continued digging frantically on Tuesday evening as their search for survivors of the Tel Aviv parking garage collapse surpassed 30 hours.Five rescue workers solemnly carried out a third body, encased in a white body bag, while some 200 rescue workers looked on mostly in silence.To enter the site of Monday’s collapse, journalists and rescue workers must traverse three flights on a rickety and dust-covered staircase, supported by wooden beams.At ground zero, hundreds of rescue workers sifted through the rubble in hopes of finding some sign of life.One worker sat in the dirt trying to excavate a twisted rebar while her partner hacked away with a pickax.“Come over here and help me,” she told him, sounding exasperated and a bit tired.As in most such rescue operations, workers face the challenge of trying to dig as quickly as possible without harming any victims who remain trapped below.According to Home Front Command the general area in which the missing persons are located has been identified but rescuers are not in contact with them.HFC representatives urge optimism, stressing that people have been found after multiple days in similar situations.“You should never lose hope. Even after 10 days. We are working on the assumption that the people are alive,” Col. Ariel Blitz said on Tuesday.And so, a sense of seriousness and urgency was prevalent as rescue workers raced against the clock to find the final three missing persons.