Some.5mm rounds were found in an empty trailer in the youth village on December 20th. 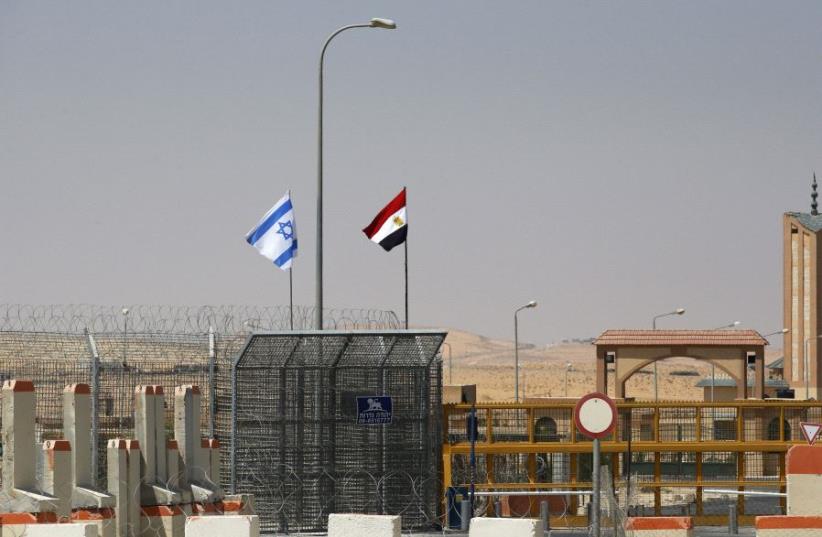 An Israeli flag (L) flutters next to an Egyptian one at the Nitzana crossing, along Israel's border with Egypt's Sinai desert
(photo credit: REUTERS)
Advertisement
An Egyptian general visited the southern Israeli community of Nitzana on Sunday to apologize to residents for stray bullets fired by his troops which hit the youth village in late December.According to a report by Hadashot News, the general who commands forces along the Israeli border crossed the border on a previously unpublicized visit and inspected the damage caused by the rounds of bullets which were fired during a live-fire drill on December 20.The bullets were found inside a trailer in Nitzana near the border with Egypt’s restive Sinai Peninsula by a leader of one of the local youth groups. While there were no casualties or wounded in the incident, the bullets caused minor damage to the trailer.Following the incident, OC Southern Command Maj.-Gen. Herzi Halevi met with the head of the Ramat Negev Regional Council, Eran Doron. The IDF Spokesperson’s Unit stated that the incident would be investigated and that “the IDF sees such events seriously.”
According to Hadashot News, the Egyptian general stated that the shooting was a result of an Egyptian Army drill next to the border, echoing the IDF investigation, which concluded that the fire was accidental.Israel has a 240-kilometer border with Sinai, and Cairo and Jerusalem have been reported to have been closely cooperating in the Sinai Peninsula in the fight against ISIS terrorists since Egyptian President Abdel Fattah al-Sisi rose to power.Sisi has waged extensive military operations against ISIS in Sinai, and while the terrorist group has lost much of its strength, the group remains active and, despite its small size, continues to carry out deadly attacks on Egyptian security forces.Drug smuggling from the Sinai Peninsula into Israel is also a major concern for IDF troops who are stationed along the border.
While rare, there have been three shooting incidents on the Israeli-Egyptian border since November, including an exchange of fire between drug traffickers and IDF troops.In late November an Egyptian policeman accidentally fired toward a military vehicle patrolling along the border. A senior officer in the Southern Command said that it is believed the officer shot toward the vehicle because of “heightened operational tension” that Egyptian policemen are facing in their fight against drug smugglers and terrorists in the restive peninsula.“We are two armies, and our countries have a peace agreement with a security attaché, and both armies are obligated to maintain it,” the senior officer said, explaining that the Egyptian Army is thoroughly investigating the unusual incident.