The entrance to Jaffa was turned into a makeshift bus station as hundreds of Palestinians arrived in private buses. 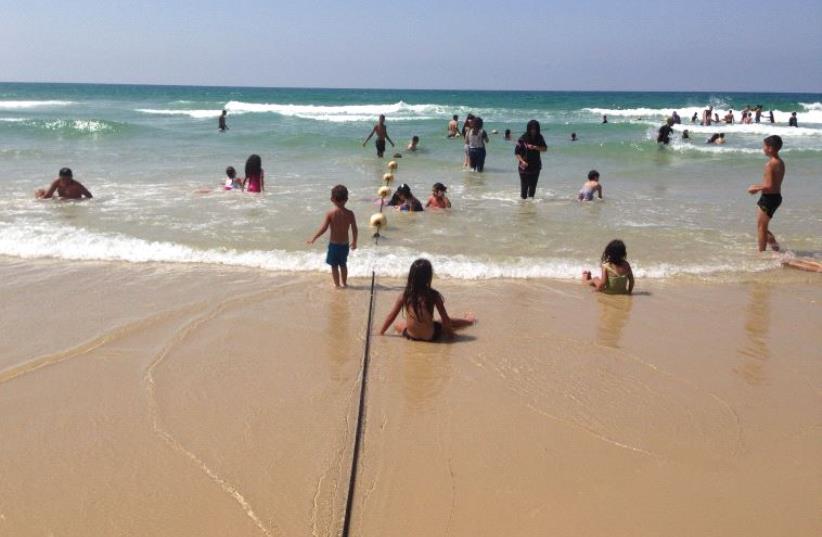 Palestinian children and their parents at Charles Clore Beach, September 15th
(photo credit: ELIYAHU KAMISHER)
Advertisement
A disgruntled lifeguard at the Charles Clore Beach in Tel Aviv yelled in broken Arabic on Thursday in an attempt to gain control of the beach, which was packed with jeering and splashing Palestinian youths from the West Bank. “Boy! Boy! move from there!” the lifeguard yelled, although it is unclear which of the 80 or so boys playing in the water he was yelling at.On September 5th the Coordinator of Government Activities in the Territories (COGAT) announced several actions, approved by Defense Minister Avigdor Liberman for Palestinians ahead of the Eid al-Adha holiday, the Feast of Sacrifice; among those were 100,000 permits to Israel for West Bank Palestinians. Many of these Palestinian vacationers are spending their time in Jaffa and the adjacent beaches.“It was not easy to get here, I had to apply weeks ahead for the permit and the trip took around 3 hours, but of course it’s worth it,” stated Hassan from Hebron, who declined to state his last name.For Mohammed, 25, from Ramallah this visit has particular significance as it is his first time visiting the ocean. “It is my first time seeing the ocean here or anywhere in world, it makes me so happy,” stated Mohammed, “It just fills me with a great feeling to see it after 25 years, it is hard to explain.”A group of four men from Nablus huddled around beach lockers while a Tel Aviv city worker also speaking in a mixture of broken Arabic and Hebrew tried explain the system. “Put your things in here, and you can lock it for the whole day,” he said. The men seemed unsure about the security of the beach lockers but nonetheless put their valuables in the metal boxes and carried on towards the beach with their excited families in tow.Mohammed, 19, from Jenin was less lucky, he lost his locker key while swimming and was trying to locate the city worker to open it. “I was having so much fun until this,” he told the Post, “Someone was supposed to help me but he left 20 minutes ago and never came back.”On Thursday the beach was full of families from throughout the West Bank, neon plastic beach toys and sandcastles peppered the beach as brothers pelted their sisters with globs of sand.The entrance to Jaffa was turned into a makeshift bus station as hundreds of Palestinians arrived in private buses.Everyone who spoke with The Jerusalem Post was ecstatic to be enjoying the day with sand between their toes, but this did not change their negative image of the IDF. “The army makes it so hard for us to travel and to be here,” Siad Mohammed told the Post. “I’m happy to be here, but the fact that I have to ask the army to see the ocean is crazy.”In June Prime Minister Benjamin Netanyahu, Defense Minister Avigdor Lieberman and IDF Chief of Staff Lt. Gen. Gadi Eisenkot, rescinded around 83,000 Ramadan visitation permits as a security measure in light of the Sarona Market terrorist attack, which killed four. The terrorists came from Yatta, a Palestinian village near Hebron.Wednesday night witnessed even more Palestinian visitors to Jaffa. The boardwalk was jam-packed as numerous Palestinian couples smiled for selfie pictures at sunset. Along Jaffa Port restaurants were filled to maximum capacity.Before running off with his brother towards the beach Mohammed from Hebron told the Post that Jaffa holds a special place for him. “I’ve visited a lot of cities in Israel and Palestine, but Jaffa - Jaffa is just perfect,” he said.Names were changed to protect privacy