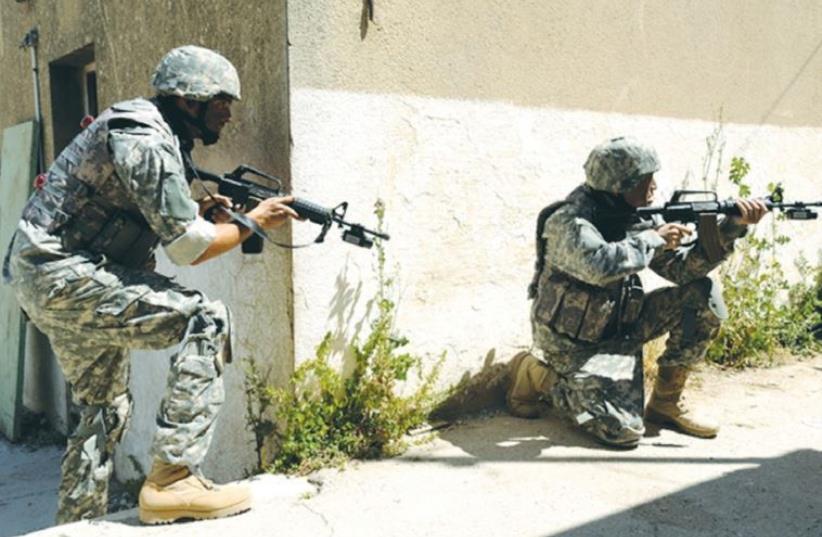 SPECIAL FORCES SOLDIERS drill recently in an urban environment that is part of the Elbit Combat Training System.
(photo credit: ELBIT)
Advertisement
Elbit Systems has won a contract to deliver combat-training equipment and systems to Poland’s special forces, the defense company announced on Monday.Elbit’s Combat Training System (CTS) is “an advanced, highly-realistic simulations- based trainer that has been specifically designed for marines and special operations forces, ranging from individual soldiers up to fullsize units,” the company said in a statement.Poland will receive live-fire training suites for combat soldiers, vehicles, and simulation equipment, as well as grenades and suicide bomber kits to simulate engagements with terrorists.CTS can be used to simulate “a wide array of operational conditions and real-world elements, including those found in urban, rural and indoor environments,” Elbit added. A combination of simulation, and live-fire training systems, enables soldiers to train-as-they-fight and carry out force-on-force exercises in realistic combat scenarios, according to the defense corporation.“It also allows trainees to hone their command and control battle management skills, as well as review, assess and improve their decision- making processes, both during and after exercises,” Elbit said.Polish forces will also receive “Digital Video Recording (DVR) and data-link capabilities that enable network training to and from a centralized management control,” Elbit said. “This will make it possible to record, monitor, and post-analyze the entire training process.”Yoram Shmuely, general manager of Elbit Systems’ Aerospace Division, said, “We are very proud to partner with RUAG Defense and Autocomp Management Ltd. in this project, and hope that it will further strengthen our cooperation in the field of land-based training and simulation, both in the region and beyond.”