‘Our mission is to ensure that highly-skilled immigrants remain in Israel,’ says Gvahim’s executive director. 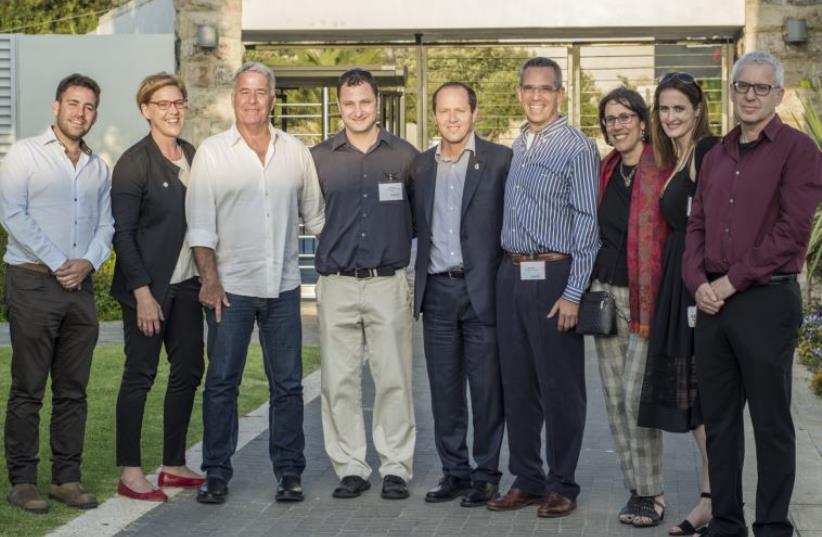 JERUSALEM MAYOR Nir Barkat, center, attends Gvahim's inaugural career-placement program in Jerusalem with the organizations leaders and olim
(photo credit: AVIGAIL BEN ELIYAHU)
Advertisement
More than 250 job-seekers were expected to gather in the capital on Monday evening to celebrate and join an inaugural career-placement program designed to assist highly skilled immigrants in finding employment opportunities after making aliya.Working in coordination with the Jerusalem Municipality, Gvahim, founded by the Rashi Foundation, is dedicated to bolstering Jerusalem’s economy via the job placement of olim.According to the program’s executive director, Gali Shahar, Gvahim was created in 2006 to eliminate the obstacles many olim face upon attempting to enter Israel’s job market.“Our mission is to ensure that these highly skilled immigrants remain in Israel,” Shahar said.“People come to Israel and leave everything behind – careers, friends and family – to start a new life, and no matter how highly skilled you are, or where you went to college, acclimating to the Israeli employment market can be hard and sometimes frustrating.”Shahar said Gvahim has placed more than 1,300 immigrants in desirable jobs in Tel Aviv, Ashdod, and other cities across the country since 2006.Since opening its Jerusalem office four months ago, more than a dozen olim have found work in the capital through the organization, she said.“We have an 88 percent success rate in placing olim in other parts of the country, and we have already placed 60 percent of the 24 people looking for work in Jerusalem,” she said.“The reason we’re celebrating today is because we would like to let other companies know that employing highly skilled immigrants will both benefit them and strengthen Jerusalem’s economy.”Jerusalem Mayor Nir Barkat, Gvahim’s Chairman Moshe Mor, COO and Partner at JVP, Fiona Darmon, and Executive Director of Start-Up Nation Central, Wendy Singer, were among those in attendance at the JVP compound to celebrate the organization’s launch.