President Reuven Rivlin bestowed the award on this year's individuals and organizations who selfless activities for the country have made a significant impact. 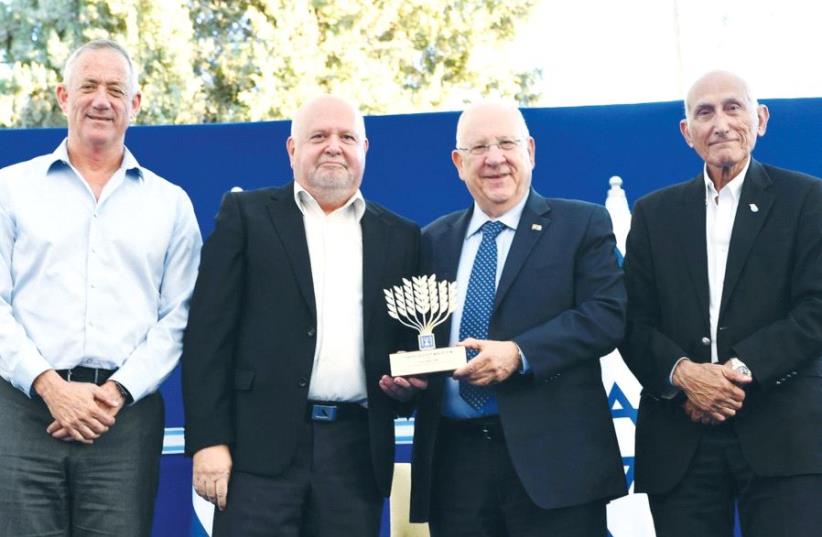 PRESIDENT REUVEN RIVLIN attends the President’s Prize for Volunteerism event at his official residence in Jerusalem on Wednesday along with former IDF chief of staff Lt.- Gen. (res.) Benny Gantz (left) head of the prize committee; honoree Itzik Zivan (second right), from Caesarea, who has been volun
(photo credit: MARK NEYMAN / GPO)
Advertisement
Narrowing the social gap and the battle for equal rights and opportunities in all fields for all sectors of the population were the underlying themes in this year’s selection of recipients for the President’s Prize for Volunteerism.The winners included: • Batya Avissar, 83, from Ramat Gan, who came clandestinely from her native Iraq to British Mandate-controlled Palestine in 1943. At age 14, Avissar joined the Irgun national military organization and has been a volunteer ever since. In 1977, her eldest son died in the line of duty while serving in the IDF. Since then, she has helped other bereaved families, including Palestinians, learn to live with their individual tragedies and move on with their lives.• Iyad Abu Zakika, 57, an ambulance driver from Baka al-Gharbiya who for 15 years has volunteered with Magen David Adom, filling a variety of positions from providing first aid to administering rapid emergency response.• Ariel Almog, 51, founder of Gdolim B’Madim, or “Great in Uniform,” a life-changing organization that enables young men and women with disabilities to realize their dream of contributing to the national well-being by serving in the IDF, thus paving the way for them to integrate into mainstream society. Currently, there are 350 such soldiers serving on 22 IDF bases.• Devora Goldfarb, 57, was born in Argentina and lives in Tel Aviv and has for many years engaged in both formal and informal educational activities to help those in the weaker socioeconomic sectors of society.Goldfarb works in cooperation with the Education and Social Welfare ministries and is in close and frequent personal contact with families, helping each according to their needs.She also established a school in Jaffa that caters to children with learning disabilities and the results have often verged on miraculous.• Itzik Zivan, 65, from Caesarea, has since 2009 devoted all his spare time to helping the Beduin community in a variety of projects. Most important, he guides community members exercise their rights.His involvement has led to considerable change, especially among Beduin women and younger adults who are now contributing economically to their families. He has also been influential in promoting leadership potential among the young, getting them into colleges and universities, and in the establishment of a catering business run by Beduin women.• Shaul and Bella Cohen, from Ramle, now in their 70s, are long-time volunteers individually and jointly in a variety of projects that help young people from all sectors who need advice from older adults. Since opening a Citizens Advice Bureau in Ramle, they spend many hours there each day counseling both Jews and Arabs.Organizations and Groups that were awarded prizes include: • Harhavat Hama’agalim, or “Widening the Circles,” for encouraging youth from communities in the periphery to take on social responsibilities and do for others; • Hinuch LePsagot, a national organization dedicated to helping youngsters from peripheral communities who have a potential for excellence; • Lev Malka, which enables children who are cancer patients to live as normal a life as possible; • Mosaica, a not-for-profit organization that believes a shared love of music can lead to dialogue, which can lead to a sense of community through mutual understanding and tolerance between Israelis of all backgrounds; • The Center for Social Rights, a social initiative operating in the western Negev in partnership with Sapir Academic College and residents of Negev towns and settlements to make them more aware of their rights and of how exercising of those rights could improve their economic status and quality of life.• The youth prize for volunteerism was awarded to Natan Goldfarb, 14, a student at Himmelfarb High School in Jerusalem where he is active in youth organizations. Goldfarb dreamed up a project of getting user-friendly computers to low-income families after he realized a classmate had fallen behind in his studies because he did not own a computer.He persuaded friends, family, other schools and various organizations to upgrade old computers that were no longer in use, and distribute them to needy families. So far, 1,000 such computers have been distributed.