Erdan vows to crack down on ‘acts of grassroots terror’

Speaking at a press conference with Acting Police Commisioner Asst.-Ch. Bentzi Sau in the Old City, Erdan praised the actions of police in recent days. 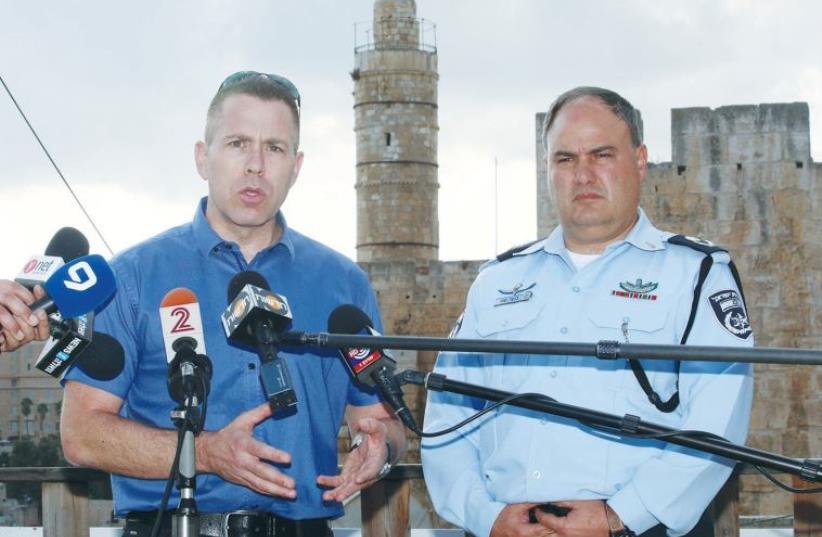 PUBLIC SECURITY MINISTER Gilad Erdan speaks to reporters yesterday outside Jerusalem’s Old City. To his right is Acting Police Commissioner Asst.-Ch. Bentzi Sau
(photo credit: MARC ISRAEL SELLEM)
Advertisement
Public Security Minister Gilad Erdan said on Wednesday that increased police patrols, which were launched before the holidays, would continue “until we are able to establish deterrence and our sovereignty on all parts of Jerusalem, the capital of Israel.”Speaking at a press conference with Acting Police Commisioner Asst.-Ch. Bentzi Sau in the Old City, Erdan praised the actions of police in recent days, noting that they had already carried out a series of arrests of suspects believed to have taken part in acts of violence against Jewish pedestrians in the Old City that were filmed and circulated online in Israel.Regarding the rioting, Erdan said: “We don’t consider these acts public disturbances, rather acts of grassroots terror.”He said he would continue to support stiffer penalties for those taking part in the riots, saying that broader use of administrative detention and restraining orders were being considered.He added that cooperation between the police and the Shin Bet (Israel Security Agency) would also continue.When asked by reporters what he thought about Knesset members visiting the Temple Mount – visits that often result in disturbances – he said MKs had full freedom of movement under their parliamentary immunity, including on the Temple Mount, and that restricting this right would require the approval of the attorney-general.He blamed the rioting on “incitement” coming from the Northern Branch of the Islamic Movement in Israel, the Palestinian Authority, Hamas and elsewhere.Jerusalem police continued their crackdown on violent Palestinian offenders overnight Tuesday, before nearly 100,000 Jews gathered to pray at the Western Wall for the Priestly Blessing Wednesday morning.According to police spokesman Micky Rosenfeld, 13 arrests were made in the Muslim Quarter and in other flashpoint Arab neighborhoods in east Jerusalem, including Jebl Mukaber, A-Tur, Isawiya and Ras el-Amud. Five of the 13 people arrested were minors, he said.Since the Defense Ministry banned two violent Muslim groups from the Temple Mount earlier in the month, police have arrested over 200 Palestinians accused of rioting and attacking officers and civilians with rocks, firebombs and fireworks.Rosenfeld said Muslim age restrictions barring men under 50 from ascending to the Temple Mount would remain in effect as police made security assessments for Friday prayers, after which rioting frequently occurs.“Police have stepped up security throughout the capital and continue to emphasize security measures in and around the Old City,” he said, adding that they would continue their crime sweep until all suspects were apprehended.“More arrests are expected,” he said.