Erdogan meets with US Jewish leaders in reconciliation effort

Relations between Turkey and Israel hit a new low following Israel’s deadly raid in 2010 of a Turkish ship attempting to breach its blockade of the Gaza Strip. 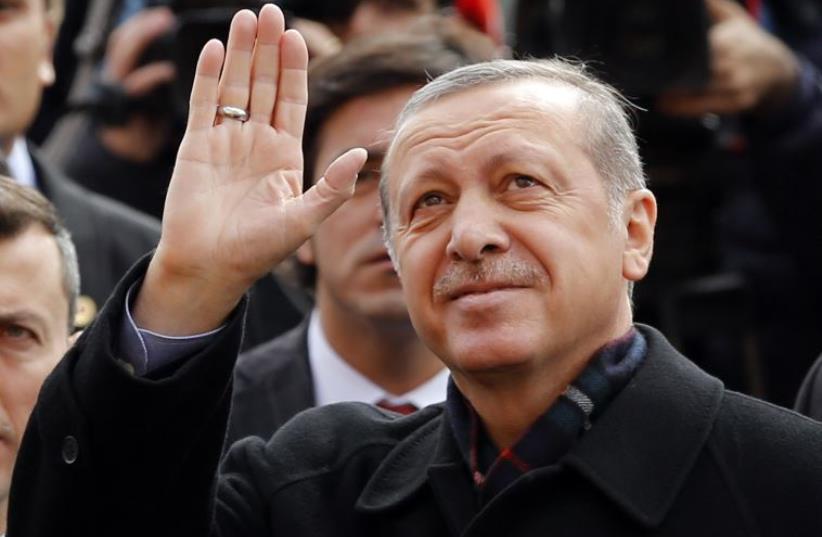 Turkish President Tayyip Erdogan greets his supporters
(photo credit: REUTERS)
Advertisement
Turkish President Recep Tayyip Erdogan met with Jewish leaders in Washington reportedly to smooth ties as Turkey and Israel seek to reconcile.
Jewish groups in attendance included the Anti-Defamation League, the American Israel Public Affairs Committee, B’nai B’rith International, the Jewish Community Relations Council of Greater Washington and the Conference of Presidents of Major American Jewish Organizations.
“Erdogan and the guests reiterated their willingness to strengthen cooperation and communication despite differences,” said a report Wednesday in Turkey’s Daily Sabah newspaper, citing “presidential sources.”
Already rocky, relations between Turkey and Israel hit a new low following Israel’s deadly raid in 2010 of a Turkish ship attempting to breach its blockade of the Gaza Strip. Reconciliation talks are ongoing.
Daily Sabah said the participants, who included top Turkish officials, discussed “recent terror attacks in Turkey and Belgium, the war against terror, Turkey’s relations with Jews, the relations between the US, Israel and Turkey, the situation in Palestine, the refugee crisis, anti-Semitism and Islamophobia.”
Jewish organizational participants said the meeting was off the record, and declined to comment, even after the meeting was reported in the Turkish press.
The American Jewish Committee, not present at the meeting, welcomed Erdogan’s overtures, while recalling recent statements by members of his party that blame Jews for Turkey’s woes.
“President Erdogan’s expressed commitment to ‘fight’ anti-Semitism is particularly welcome in light of past statements by him and other AKP leaders,” said Jason Isaacson, AJC Associate Executive Director for Policy and Director of Government and International Affairs, in an email to JTA. “The security of Turkey’s venerable – and vulnerable – Jewish community must be a high priority.”
In recent months Erdogan has expressed an interest in renewing ties with Israel, stemming from a joint interest in tamping down the violence in Syria, which neighbors both countries; the discovery of natural gas reserves in the eastern Mediterranean, which Israel already is exploring with Cyprus and Greece, and Erdogan’s desire to isolate his main rival in the region, Russia.
After the March 19 terrorist attack in Istanbul in which three Israelis were among five dead and many Israelis were injured, Erdogan phoned his Israeli counterpart, Reuven Rivlin, and said the two countries should cooperate in battling terrorism. In an address at the Brookings Institution think tank Thursday, Erdogan said the attack was not solely aimed at Israel. He expressed hope that the tragedy had brought the former allies closer together.
Relations between Turkey and the United States are tense because of differences over Turkey’s attacks on Kurdish militias. Turkey sees them as a threat, while the United States see them as critical to restoring calm in that country’s devastating civil war. Erdogan is in Washington for a nuclear summit, but President Barack Obama refused to meet with him formally, although they had an informal chat.
Separately, Sen. Tim Kaine, D-Va., the top Democrat on the Senate’s Middle east subcommittee, said this week that he was surprised to find during a recent Middle East tour that Erdogan and Israeli Prime Minister Benjamin Netanyahu were equally appalled at expressions of anti-Muslim rhetoric by Republican candidates in the presidential election.
“These guys agree on nothing but they both said to this group of senators ‘what’s going on in the presidential race?’,” Kaine said on VA Talk Radio Network, in a report picked up by BuzzFeed.