The Turkish parliament signed off on the accord two weeks ago. 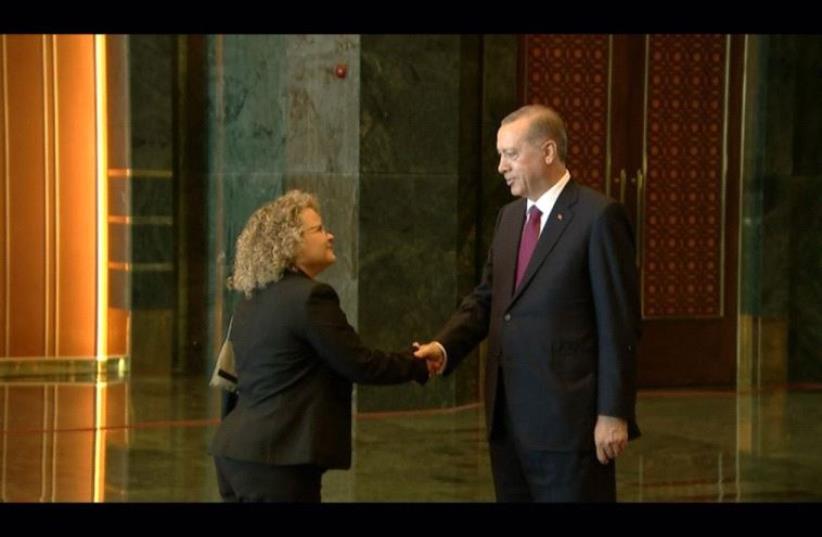 Turkish President Erdogan with Shani Cooper.
(photo credit: TURKISH PRESIDENCY)
Advertisement
Turkish President Recep Tayyip Erdogan on Wednesday signed legislation making possible the reconciliation deal with Israel and leaving just one more formal step – registering the bill in the official Turkish registry – before an exchange of ambassadors and full normalization of ties.Erdogan’s signing of the bill that was ratified earlier this month by the Turkish parliament came just a day after he greeted Shani Cooper, the political counselor at Israel’s embassy in Ankara, at an official reception marking Victory Day. One official said Erdogan called over a translator when he met Cooper, and greeted her.“This is a signal of the warming of ties,” the official said.The naming of ambassadors is expected once all the formal steps are finished. The Foreign Ministry’s appointments committee has not yet met on naming an envoy to Ankara, and is waiting for all the procedural matters to be completed before doing so.The Turkish parliament signed off on the accord two weeks ago.The deal calls for Israel to pay, within 25 days of the agreements going into effect, $20 million in compensation to a fund for the families of those killed in the Mavi Marmara incident six years ago, and allow Turkey to provide humanitarian aid to Gaza via Ashdod Port.In exchange, Turkish legislation will prevent any outstanding legal claims against IDF soldiers, and Turkey will be obligated to prevent Hamas from preparing attacks against Israel – including fund-raising – from Turkish soil.The accord, signed at the end of June, was originally to have been implemented by now, but the timeline was delayed because of the attempted coup on July 15 and its aftermath.Sharp words exchanged between Turkey and Israel following Israeli response to a rocket fired from Gaza earlier this month did not impact on moving the agreement forward.