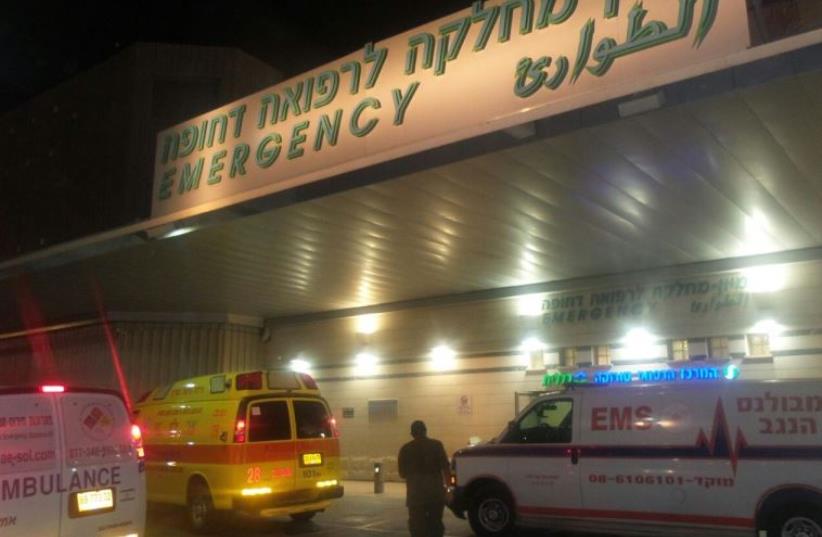 Soroka University Medical Center in Beersheba
(photo credit: PANET.CO.IL)
Advertisement
An Eritrean mistaken for a terrorist during Sunday’s attack in Beersheba died of gunshot wounds, and not a beating by a mob, Negev subdistrict police said on Wednesday after receiving the autopsy results.Late Wednesday evening, Negev police announced the arrest of four suspects believed to have taken part in the brutal attack on Haptom Zarhum, 29. Two of the suspects were employees of the Israel Prisons Service – an officer and a guard “who work at a facility in the South,” police said.
Israeli crowd beat Eritrean migrant mistakenly identified as Palestinian shooter
Police said the four suspects will appear in court and then placed on conditional release, in accordance with a decision reached after consulting with district prosecutors. Police said they expect more arrests to follow.On Tuesday, acting police commissioner Asst.-Ch. Benzi Sau said detectives had begun collecting evidence and questioning witnesses to the beating of Zarhum, who was shot by a security guard and then set upon by bystanders, who kicked him and dropped a metal bench on his head after he was incapacitated and on the floor.Officers had identified a number of people of interest and were waiting for the results of the autopsy before bringing them in for questioning under caution, Sau said.“We know the public is living under a great deal of pressure right now, but there are clear lines and we will not allow people to harm minorities [Arabs] or suspects,” he said.The terrorist, Muhand al-Uqbi, 21, an Israeli from Hura, actually acted alone, and not has was initially thought on Sunday evening. Uqbi, Zarhum and Golani Brigade soldier Omri Levy, 19, from Sdei Hemed, were killed and 10 other people were wounded.After the shooting, Ziad, a security guard, said that he heard rapid gunfire and ran inside the Beersheba Central Bus Station, where he saw Zarhum crawling on the floor next to a soldier who had been stabbed.Ziad, speaking just after the shooting and before it had been determined that Zarhum was innocent, said that he shot one round to wound the man he thought was a terrorist.A spokesman for the Negev subdistrict police said they did not know yet how many bullets or how many different shooters may have hit Zarhum.Zarhum’s family is eligible to receive the benefits granted to relatives of terrorist victims, the Defense Ministry and National Insurance Institute said. The law holds that only Israeli residents, citizens or others who entered the country legally are eligible for such benefits.The joint statement added that people wounded in terrorist attacks who are not eligible for benefits can turn to a special committee to decide if they merit payment in exception to the law.In the case of Zarhum, the Defense Ministry and National Insurance Institute have already decided to bring the case up before a special committee set to meet soon.Ma’ariv Online staff contributed to this report.