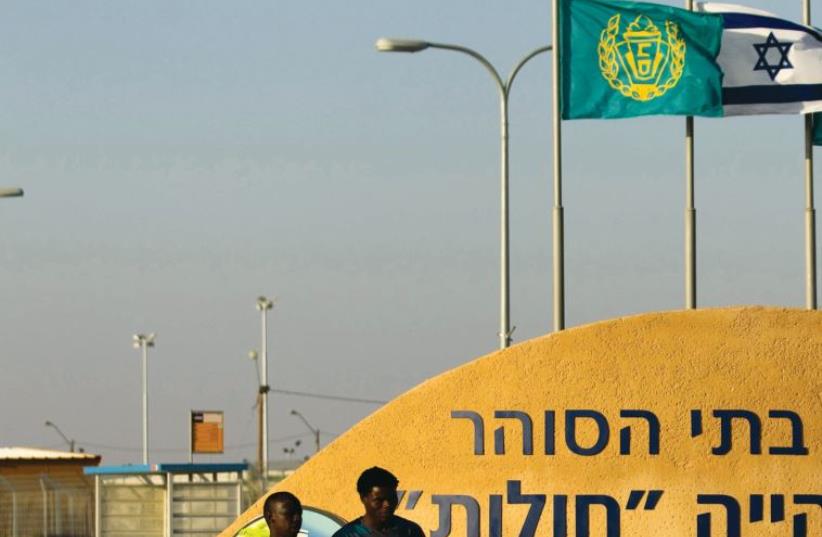 AFRICAN REFUGEES are seen leaving the Holot detention facility.
(photo credit: REUTERS/AMIR COHEN)
Advertisement
Friends of an Eritrean asylum- seeker who was with a toddler cousin when she was stabbed in a hate crime in 2014 are fighting to prevent his imprisonment in the Holot open detention center near the Sinai border.They say such incarceration would worsen the trauma and pressure he has felt since that night in early 2014.Friends and associates of Fetwi Yoseif say he received a summons to present himself on February 21 at Holot, some 70 km. southwest of Beersheba, and that if he doesn’t show up, he’ll be sent to Saharonim Prison, near Holot.That leaves them fewer than 10 days to appeal the summons.There seemed to be disagreement between the state and Fetwi and his friends regarding the status of his summons to Holot.Sabine Haddad, the spokeswoman for the Population, Immigration and Borders Authority, said last week that the summons has been canceled for the time being, “due to the tragic case of the family,” and that he could receive a new summons in a couple of months.Oftentimes summons to Holot are canceled due to reasons ranging from illness to having children on the outside who are dependents, she said.Haddad said the Population, Immigration and Borders Authority is examining the allegation that a staffer spoke to Yoseif in an insulting way.Yoseif, 36, has lived in Israel since 2010. He said he fled Eritrea for Sudan to escape army service, and when in Sudan he was kidnapped by smugglers and taken to Sinai, where he was tortured and held prisoner until relatives in Europe could pay his ransom.He then entered Israel illegally, where he was jailed temporarily in Saharonim Prison before he was released and made his way to Tel Aviv.Fetwi was holding threeyear- old Ruthie when her sister Kaku Yamena, then 18-months-old, was stabbed repeatedly in the head with scissors by an Israeli man named Michael Zaretzky on the night of January 3, 2014 in south Tel Aviv.Fetwi and his cousin Yordanos, Kaku’s mother, gave chase, finding Zaretzky near the central bus station that night. From that point on Fetwi – who was already living with the family – became a caretaker of sorts for Ruthie, helping her deal with her fears in a country that no longer felt safe.Fetwi said he has received no assistance from the state since that night, nor any treatment or therapy for the trauma he suffered from the attack.On Friday he was taken by three Israeli supporters to see a psychiatrist in Herzliya, who will write a psychiatric assessment to be presented to an attorney this week.They plan to include the assessment in their appeal of his summons, as it could indicate that he is in mental distress and that his emotional and mental condition could worsen to a dangerous extent if he is jailed in Holot.Speaking to The Jerusalem Post this week, Fetwi said he is not working and is unable to sleep and that “it’s all very difficult, and I’m very worried I’ll be sent there [to Holot].”His supporters say they are not demanding that he be given refugee status or any comprehensive treatment from the state, rather that he be left alone to live his life without the threat of incarceration.“Instead of saying this man was the victim of a hate crime committed by an Israeli and we should be giving him treatment, they’re trying to jail him,” said Heidi J. Gleit, a friend and supporter of Fetwi who accompanied him to the psychiatrist on Friday.According to the attempted murder indictment issued against Zaretzky in January 2014, he told police he stabbed the infant “because I hate them, they’re black and they make a real mess,” and that he was trying to stop “black terrorism.” He had been hospitalized in mental institutions twice before the attack and was ruled mentally unfit to stand trial and hospitalized.The state has not recognized the family as victims of a hate crime or a terrorist attack, and over the two years they have lived in Israel they had to rely on the support of the refuge-seeker community and Israeli supporters, who raised tens of thousands of shekels for their medical bills.Though her parents and sister were not given status in Israel, Kaku was given legal residency status by then-interior minister Gilad Erdan.Last month, Kaku and her family – Yordanos, father, Muli, and sister Ruthie – were granted asylum in a European country that has asked not to be named.During the two years after the attack, Kaku’s father was called to report to Holot, though the family managed to get the summons canceled.Today Fetwi lives with Yordanos’s brother Sami and his wife and four kids, and trying to get his life back on track.Fetwi’s friend Gilad Liberman said on Friday, “It’s a very big shame for Israel that this family felt that they had to leave after what they went through, and that they were given asylum elsewhere and not here.”At the moment, Fetwi is trying to get the summons blocked, so he can continue to live in Tel Aviv with his remaining relatives in Israel.