Demonstrators had taken to the streets to protest what they said was ill-treatment and "oppression" from the "authorities" that have targeted the Ethiopian community for "years." 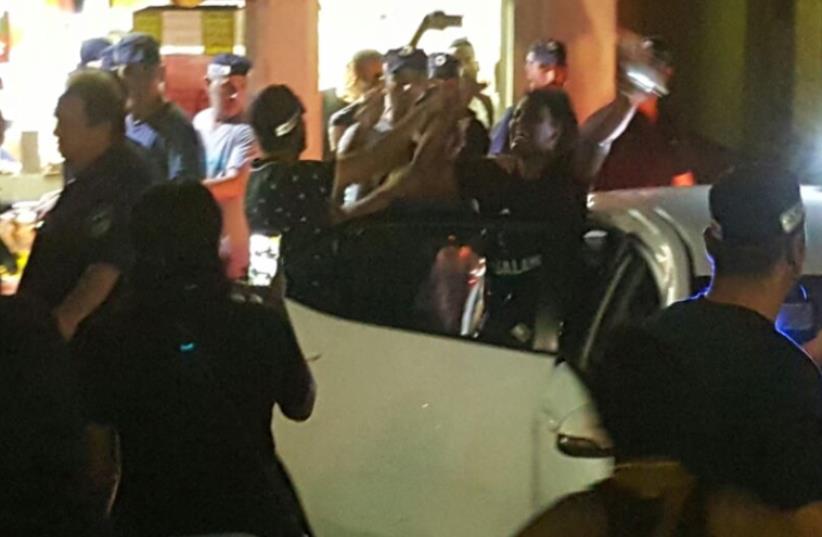 Ethiopian protestors arrested in Tel Aviv
(photo credit: YOEL MILLER)
Advertisement
A number of Ethiopian activists were placed under arrest Sunday evening in what police said was a demonstration that had "disrupted the public order" following a protest held in Tel Aviv.Authorities detained nearly a dozen demonstrators after they began blocking the entrance to the South Ayalon Highway, preventing the flow of traffic to vehicles, according to a statement released by police. "During the event several protestors chose to ignore the orders given by officers and began to disrupt the public order and block roads."Demonstrators had taken to the streets Sunday to publicly lament what they claim has been ill-treatment and "oppression" at the hands of "Israeli authorities" that have "for years targeted the Ethiopian community." "We are fed up, we are the new generation," activists chanted throughout a number of busy streets in the beach-side city, starting from Rabin Square and flowing into Derech Menachem Begin. Protestors also expressed frustration with government institutions and perceived social inequities within Israel starting with police, and included the Ministry of Health, unequal access to educational opportunities and religious discrimination among other grievances. Amber Bogale, who headed the protest effort, told the Yediot Ahranot newspaper: "For years, (Israel) has been depriving us of our equal rights. We serve in the army - and yet police brutality and discrimination infect all spheres of our lives.""Police violence must stop," she continued. "There are constantly more victims of police violence from our community." In response, Israel Police said that they acted appropriately and only intervened when the event posed a risk to public safety. "During the protest several demonstrators violated the public order and illegally blocked roads to vehicles. As a result, policemen were obligated to clear the way and began making arrests. Police policy is to enable freedom of expression and protest, yet we must enforce the law without compromise against whoever has chosen to break law and order. "