The community has long complained about unfair treatment and violence by police. 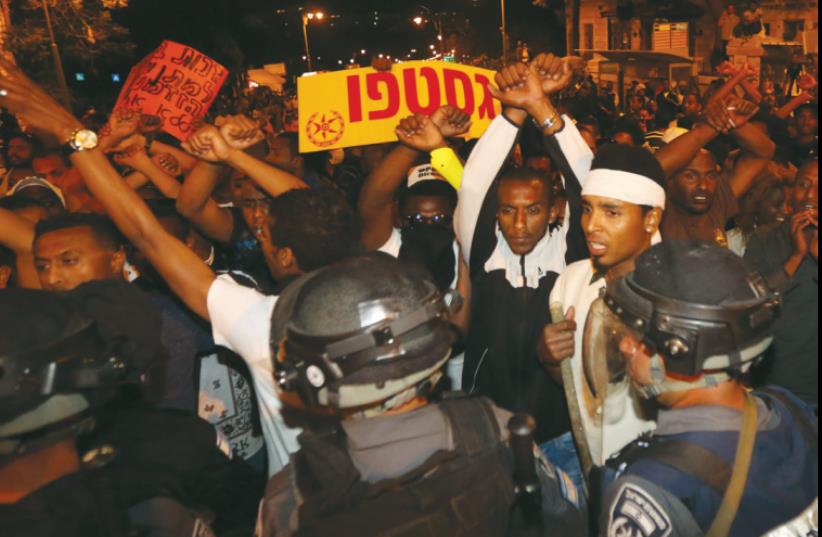 ETHIOPIAN ISRAELIS march in a protest against police brutality and racism in Jerusalem on Thursday.
(photo credit: MARC ISRAEL SELLEM/THE JERUSALEM POST)
Advertisement
Ethiopian Israelis plan to hold a protest march in Tel Aviv against racism and police brutality Sunday afternoon, three days after more than a thousand protesters rallied in Jerusalem Thursday night, blocking traffic and clashing with police.The march is planned for 3 p.m. outside the Azrieli towers in central Tel Aviv, located at one of the main traffic intersections in the city. As before Thursday’s rally, Israelis spread word of the protest via social media.Thursday night’s rally in Jerusalem was triggered by a video released earlier in the week of an Ethiopian Israeli soldier in uniform being beaten by an Israel Police officer and police volunteer in Holon.The community has long complained about unfair treatment and violence by police, and the video received widespread coverage in the Israeli media.On Thursday night, around 1,000 Ethiopian Israelis began rallying outside Israel Police headquarters in the capital, eventually blocking traffic at a number of intersections in the city. Police used tear gas to clear the crowd, and in the ensuing fracas, three policemen and more than 10 protesters were hurt and received medical treatment.Later Thursday night, Police Insp.-Gen. Yohanan Danino praised officers for “exercising restraint” and said he had spoken with leaders of the Ethiopian- Israeli community and agreed that the police would reexamine a number of investigations involving Ethiopians and allegations of police wrongdoing.Meanwhile, Israeli Arab politicians voiced their solidarity with Ethiopian protests against racism on Friday, seeking to compare their struggle with their own.“As an Arab citizen, I am very familiar with the feeling of standing in a demonstration in front of a police officer whose eyes are blinded by racism,” Joint List head Ayman Odeh said in a statement posted on Facebook on Friday.Since the election campaign, Odeh has sought to reach out to non-Arab citizens.“I can imagine what the Ethiopian youths felt as they were protesting, when the police began to beat, firing tear gas, and arresting them,” he said.“The struggle for a real democratic and equitable society without discrimination of any kind – this is your and our struggle.”Balad MK Basel Ghattas said in a tweet on Friday, “Let’s demonstrate together against the racist police.”MK Ahmad Tibi (Ta’al) compared the media coverage of the Ethiopian protests to those by Arabs on Twitter, and said he hasn’t seen a rightwing politician go on TV and demand “that they return to Gaza, I mean Ethiopia.”Tel Aviv police last night said the protest did not have a permit and called on protest organizers to meet with commanders to receive approval and coordinate the rally’s proceedings.The police added that they “understand the need of the community to express their protest and identify with their pain, therefore, we intend to prepare to secure the protest as well as commuters and bystanders in the area of the protest.”