Around fifteen hundred citizens of Ethiopian origin protested during this week’s cabinet meeting, decrying “racism” and “discrimination between Jews and Jews,” according to Hebrew media. 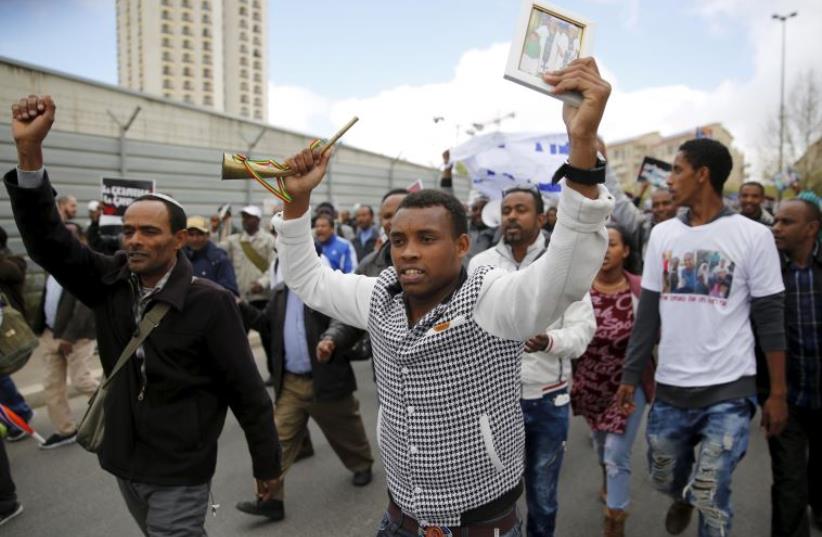 Israelis of Ethiopian descent take part in a protest in Jerusalem calling on gov't to bring the remaining members of their community living in Ethiopia, known as Falash Mura to settle in Israel, March 20, 2016.
(photo credit: REUTERS)
Advertisement
Activists protesting a recent government decision to restrict Ethiopian immigration marched on Sunday from the capital’s International Convention Center to the Prime Minister’s Office, where they held a protest.At issue is the government’s announcement earlier this month that it will limit the number of Ethiopians entering the country this year, despite previously committing to bring the thousands of Falash Mura remaining in transit camps in Gondar and Addis Ababa to the country as expeditiously as possible.Around 1,500 citizens of Ethiopian origin protested during this week’s cabinet meeting, decrying “racism” and “discrimination between Jews and Jews.”“Mr. Prime Minister, if your son wants to come to the state of Israel would you say you have no budget?” one protester asked on Army Radio, referring to the government position that there is currently not enough of a budget to allow the immigration of more than 500 people this year.Last November the cabinet unanimously approved an Interior Ministry proposal to resume aliya from Ethiopia, which was suspended in 2013.Around 9,000 people have been waiting in Addis Ababa and Gondar transit camps for the past several years in the hopes of making their way to the Jewish state. However, Jerusalem closed its doors in 2013 following a ceremony at Ben-Gurion Airport at which officials declared the “end” of Ethiopian aliya.The fate of the prospective immigrants has been a matter of some debate, with Ethiopian- Israeli activists protesting what they portray as the breaking up of families.When Ethiopian aliya “officially ended,” supporters of the decision, such as Keren Kayemeth LeIsrael-Jewish National Fund chairman Eliezer Sandberg, described a radically different situation than that portrayed by the activists. He called those left in Ethiopia gentile relations of Ethiopians in Israel.“I believe we all have relatives of relatives of relatives who don’t [meet] the criteria [for aliya]. I think it’s a mistake to blend together the joy of the return and the closing of the operation from Ethiopia with the personal issues of some people,” Sandberg told The Jerusalem Post in 2013.According to the cabinet decision, any Ethiopian who moved to Gondar or Addis Ababa after January 2013, is willing to convert to Judaism, and has relatives here who can apply for his acceptance, will be eligible to move.Since the government announced that it will limit Ethiopian immigration, MKs Avraham Neguise and David Amsalem, chairmen of the Knesset Immigration and Interior Committees, respectively, have broken coalition discipline in a mini-legislative rebellion, accusing the Netanyahu administration of looking for an excuse not to bring the rest of the Jews of Ethiopia to Israel.