“The EU expects the Israeli authorities to fully meet their obligations as an occupying power under International Humanitarian Law.” 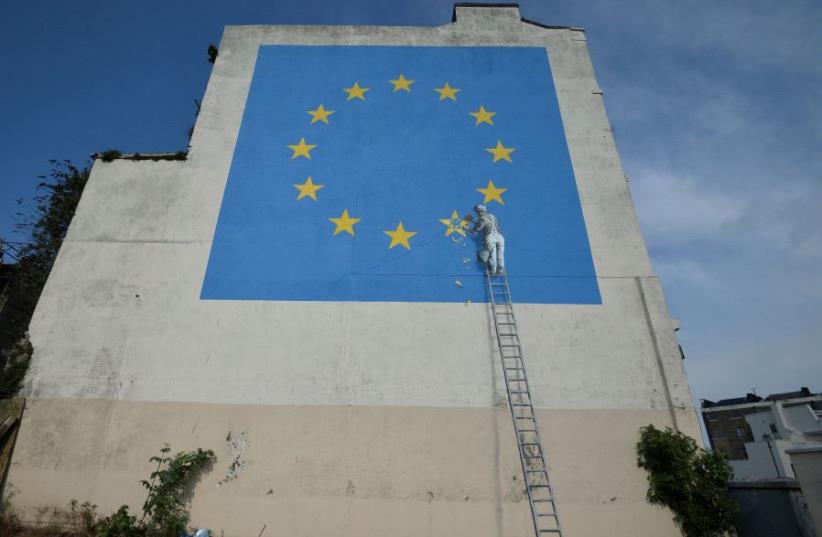 An artwork attributed to street artist Banksy, depicting a workman chipping away at one of the 12 stars on the flag of the European Union, is seen on a wall in the ferry port of Dover, Britain May 7, 2017
(photo credit: REUTERS)
Advertisement
The European Union condemned the demolition last week of a West Bank Palestinian home and restaurant, near the cities of Jerusalem and Bethlehem, that was owned by the Cassia family. The home and restaurant was built on land, which the KKL-JNF claims to own. The Cassia family said it has owned the property for generations, according to the Left-wing group Peace Now. The family failed to obtain a building permit from the Civil Administration for the home and built it illegally. Building permits for Palestinians are hard to obtain in Area C. The High Court of Justice ruled on July 29 that the home could be demolished. The Jerusalem District court is in the midst of adjudicating the issue of land ownership. The EU on Monday said that such demolitions “together with settlement construction for Israelis in the area, exacerbate threats to the viability of the two-state solution and further undermine prospects for a lasting peace.” It added that Israel’s settlement policy was illegal under international law, as were Palestinian evictions and the demolition of Palestinian homes. “The EU expects the Israeli authorities to fully meet their obligations as an occupying power under International Humanitarian Law,” it said. “The continuation of this [settlement] policy undermines the viability of the two-state solution and the prospect for a lasting peace and seriously jeopardizes the possibility of Jerusalem serving as the future capital of both States,” the EU said. The statement was issued by the EU missions in Jerusalem and Ramallah.