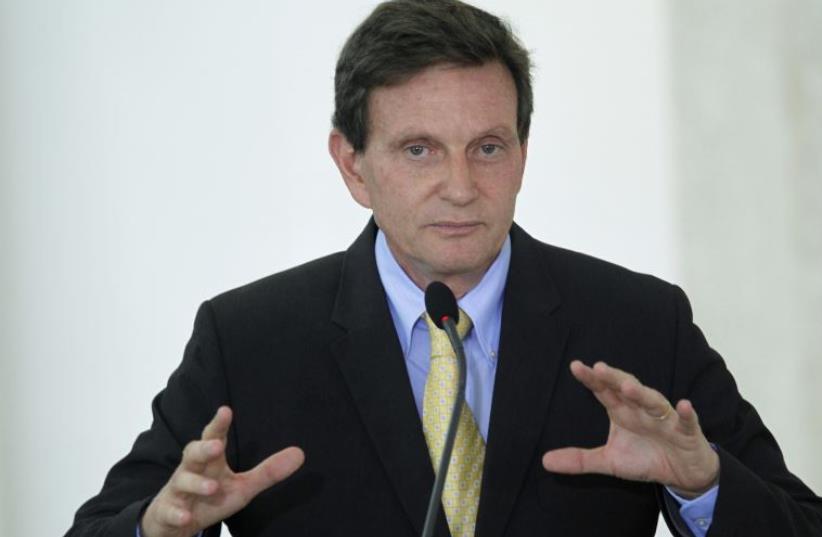 Brazilian Senator Marcelo Crivella
(photo credit: REUTERS)
Advertisement
Brazilian Senator Marcelo Crivella, who is also a prominent Evangelical leader of millions, declared that rejecting the appointed Israeli ambassador conveys a pro-boycott message.“Rejecting the ambassador can convey a message that Brazil supports BDS. Leaving Israel without an ambassador won’t help anyone,” he wrote in an article published earlier this week by Brazil’s most influential newspaper, Folha de S. Paulo.“Dani Dayan is a prepared diplomat selected legitimately by a friendly country. The fact that he defends settlements in the West Bank is a weak motive for such discourtesy and so much political inability,” he bitterly criticized.In an unprecedented imbroglio, Israel is expected to withdraw the name of Dayan, a former settler leader, to be its ambassador to Brazil, ending a four-month diplomatic row. Prime Minister Benjamin Netanyahu tapped him to serve in Brasilia, but the Brazilian government remained silent on the choice to signal an official rejection of Dayan’s credentials.In his article, Senator Crivella recalled that Brazil and Israel have deep ties. For example, Brazilian diplomat Oswaldo Aranha presided over the United Nations session that created the State of Israel. Nowadays, Israel is a key technological partner in the Brazilian defense industry, including projects with Brazilian giant private jet manufacturer Embraer.“Many of the accusations against Israel stem from a lack of understanding of the country’s geo-political situation. Israel’s structural difficulties regarding territory and natural resources must be compensated by an extraordinary capacity of defense and a national security doctrine,” Crivella stated.In November, the senator joined some 1,500 demonstrators at a pro-Israel rally held in Rio.  Days before, he had called during a major TV show for “all friends of Israel” to attend the rally.Crivella is a nephew of Edir Macedo, founder of the Universal Church of the Kingdom of God 40 years ago. He has also played a pivotal role in gathering some 5.2 million followers at 13,000 temples across Brazil and worldwide. The church owns the second-largest TV station in Brazil, Rede Record, as well as a broad conglomerate of newspapers and radio stations.Now in his second eight-year term in the Senate, Crivella also served temporarily as minister of fisheries and aquaculture appointed by President Dilma Rousseff in 2012, a clear recognition of the church’s influence in the political scenario.