Ex-security adviser due back in court over Israeli submarine scandal

The submarine affair, which police term “Case 3000,” has reportedly made significant developments recently. 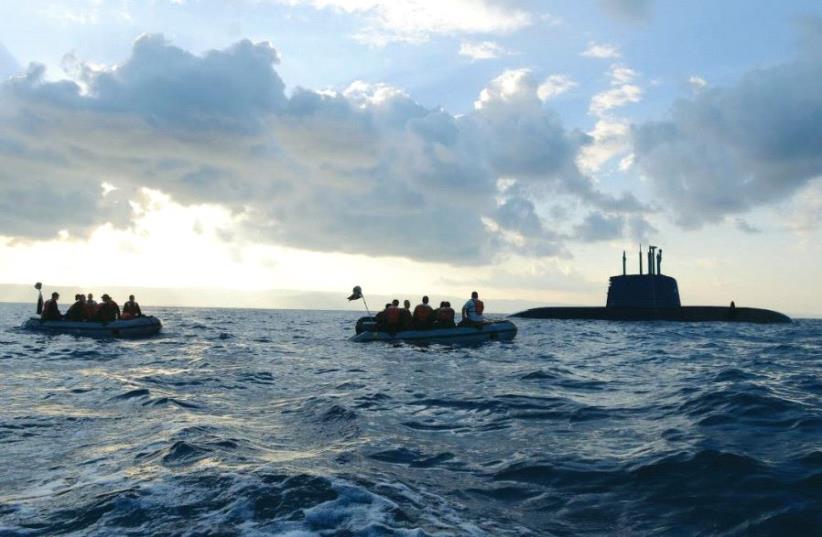 The Dolphin-class submarine first entered service in 2000
(photo credit: IDF SPOKESMAN’S UNIT)
Advertisement
Former deputy chief of the National Security Council Avriel Bar-Yosef is due back in court on Monday in a detention hearing that will give the latest hints of the status of the submarine affair, which has engulfed top aides to Prime Minister Benjamin Netanyahu and former top IDF officials.Bar-Yosef had once been nominated by Netanyahu to take the top job of chief of the NSC, but Bar-Yosef had to step aside once he was embroiled in the submarine affair, leaving Netanyahu with no NSC chief for a full year.Miki Ganor, the Israel representative of German shipbuilder ThyssenKrupp, on Friday signed a deal as a state’s witness, which broke the affair wide open and reportedly led to bringing various suspects back in to police for additional questioning over the weekend as well as a flurry of identifying new potential suspects in related bribery scandals.The affair, which police term “Case 3000,” also has focused on reports that Netanyahu’s personal attorney and relative, David Shimron, worked as an intermediary for Ganor.Shimron is suspected of pushing for Israel to buy submarines and other vessels valued at about $1.5 billion from the German firm over the objections of the defense establishment, including former defense minister Moshe Ya’alon.Ganor is also reportedly suspected of bribing former Israel Navy chief Eliezer Marom to help ThyssenKrupp win an Israeli tender for the naval vessels.Already on Thursday Judge Einat Ron of the Rishon Lezion Magistrate’s Court had said at a hearing regarding the case that there have been “substantial developments” in the affair.Ron made the statement as she extended Bar-Yosef’s detention through at least Monday. Bar-Yosef’s lawyer Jack Chen blasted the police on Thursday for holding and extending the detention of his client, saying they had not questioned him at all in recent days. Police explained that they believed he might obstruct the investigation if he were released, to which Chen responded that the case has run for a long time and that if Bar-Yosef wanted to obstruct it, he would have done it long ago.Ganor’s deal to provide information against other suspects and testify on behalf of the prosecution, includes a lenient jail sentence of only one year plus a NIS 10 million fine and some improved conditions to his current detention.Marom and other current and former top IDF officials are rumored to be on the list of those involved in the affair’s alleged criminal activities, including potentially receiving wads of cash in envelopes from Ganor.Along with Ganor, senior Israeli officials arrested last week in the investigation included Marom, Bar-Yosef and attorney Ron Shemer, who works with Ganor and Shimron.Shimron was freed from house arrest last week.There are also reports that Ganor has provided information about alleged criminal actions by Israeli officials, including Environmental Ministry Director-General Yisrael Danziger, regarding ThyssenKrupp trying to improperly intervene in a potential process to move Haifa Chemicals Corporation’s ammonia facility from Haifa’s port to the South.State Comptroller Joseph Shapira last week requested the prosecution investigate alleged criminal activities by Danziger and others regarding the facility.Other reports Thursday said former IDF chief of staff Benny Gantz had come in for questioning as a witness, not as a suspect, and that his predecessor Gabi Ashkenazi would be called in as well.Netanyahu, who is not a suspect in the case, has denied any involvement or impropriety in the deal with ThyssenKrupp, and has said he did not know about Shimron’s activities regarding the issue.